I've just completed reading Darren Dochuk's marvelous new book, From Bible Belt to Sunbelt: Plain-Folk Religion, Grassroots Politics, and the Rise of Evangelical Conservatism. (My review of it will 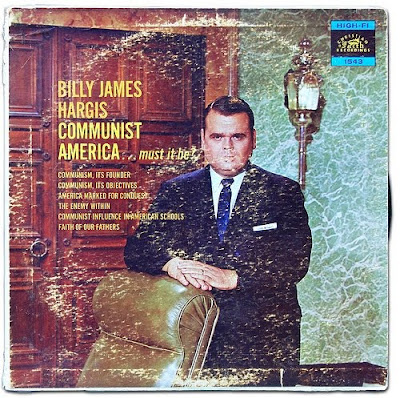 appear in Books & Culture.) His account--filled with insight into anti-communist crusaders, anti-New Dealers, Okie and Arkie folk-preachers, suburban warriors, and pro-business conservatives--is as lively as it is illuminating.

One section in particular--dealing with the John Birch Society and all sorts of anti-communist Cassandras from the Eisenhower and Kennedy years--made me wonder about the political divide in the early 1960s and the growing political chasm of today. To make a point about the bigger national trends, Dochuk quotes a passage from a JFK speech on the radical right.

So, here I pair some lines from that speech with the words of the religious right leader Billy James Hargis, an angry Christian cold warrior and baroque conspiracy theorist. An interesting contrast. (I wonder if JFK ever weighed in directly on Hargis?)

Billy James Hargis, The Facts about Communism and Our Churches (Tulsa: Christian Crusade, 1962).

Those who do not believe in the traditional American system of government began efforts many years ago to work through religious groups for destruction of our free enterprise system. One of the most influential ministers in the early days of the drive to change the direction of American Protestant churches was Dr. Walter Rauschenbusch. . . . [Hargis goes on to savage that progressive, early-twentieth century figure.] (127)

The decline of true Christianity, due primarily to years of insidious attacks from within by unbelieving clergymen, is one of a number of reasons for the enthusiastic optimism of communist conspirators in the United States today. . . . (149)

Ministers of the gospel who actively oppose the international communist conspiracy and try to bring to light the facts about its operations, receive complaints periodically concerning their activities on the ground that they are meddling in politics. We have received numerous such complaints verbally and in writing during the years of our fight against this satanic conspiracy to destroy our nation. Many Christian pastors and laymen have been convinced that it is wrong for Christians to expose or oppose the communist conspiracy in any way. (212)
John F. Kennedy, Hollywood Palladium, November 18, 1961.

In the most critical periods of our nation's history, there have always been those fringes of our society who have sought to escape their own responsibility by finding a simple solution, an appealing slogan, or a convenient scapegoat.

Financial crises could be explained by the presence of too many immigrants or too few greenbacks.

War could be attributed to munitions makers or international bankers.

Peace conferences failed because we were duped by the British or tricked by the French or deceived by the Russians. . . .

Now we are face to face once again with a period of heightened peril. The risks are great, the burdens heavy, the problems incapable of swift or lasting solution. And under the strains and frustrations imposed by constant tension and harassment, the discordant voices of extremism are heard once again in the land. Men who are unwilling to face up to the danger from without are convinced that the real danger comes from within. They look suspiciously at their neighbors and their leaders. They call for a 'man on horseback' because they do not trust the people. They find treason in our finest churches, in our highest court, and even in the treatment of our water. They equate the Democratic Party with the welfare state, the welfare state with socialism, and socialism with communism. They object quite rightly to politics' intruding on the military -- but they are anxious for the military to engage in politics.
Email Post
Labels: billy james hargis dochuk new right primary sources religious conservatism