A note for any of y'all who live near Boston. 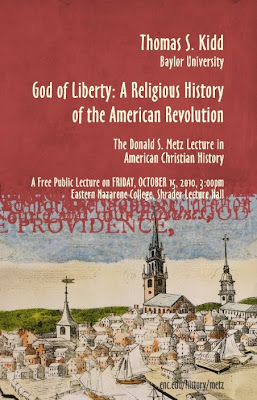 Thomas Kidd is the author of a variety of books and article on American religion in the colonial and revolutionary eras. His The Great Awakening: The Roots of Evangelical Christianity in Colonial America was published by Yale in 2007. University of Notre Dame historian Mark Noll described the book as “Well researched, clearly written and authoritatively argued. There is no book of comparable breadth, either chronologically or geographically.” Kidd also published The Great Awakening: A Brief History with Documents, with Bedford Books in 2007. His American Christians and Islam: Evangelical Culture and Muslims from the Colonial Period to the Age of Terrorism was published by Princeton University Press in 2008. Walter Russell Mead thus praised American Christians and Islam in Foreign Affairs: “This concise and well-organized study offers readers an excellent summary of American popular attitudes toward Islam from the eighteenth century onward.”

Kidd will be speaking on his new book God of Liberty: A Religious History of the American Revolution (Basic Books, 2010), which Harry Stout described as "a history of religion and the American Revolution that addresses the revolutionary war in substantial detail. Thomas Kidd brilliantly examines the role of religion in the Revolution, and explores the intersection of religion and the Republic, neither of which can be fully understood without reference to the other. Kidd demonstrates in persuasive detail how the idea of religious liberty informed the meaning of the Republic at its deepest level."

The lecture is part of a series on colonial America. Gordon Wood and Jill Lepore will speak on campus in November.
Email Post
Labels: lectures randall's posts religion and the american revolution religion in colonial America