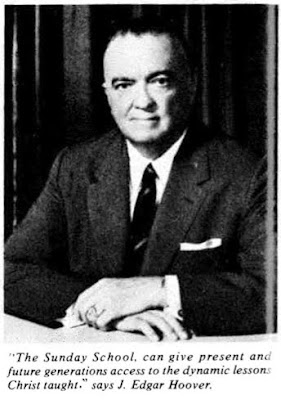 category, appeared in Christian Life Magazine (May 1970). As I was flipping through the pages and stumbled on this, I did a double take. Yes, indeed, this was the J. Edgar Hoover stumping for a cherished institution of Protestant education. I take it that he wrote for other Christian magazines, too. Haven't seen him in CT, but perhaps he graced their pages as well.

J. Edgar Hoover, "The Sunday School Can Lead Us Back," Christian Life (May 1970)

Today the Sunday School is on the defensive. There are those who minimize its positive role. There are others who, whatever their motives, seek to abolish it outright. Should they succeed, they will destroy for much of our youth as well as many older citizens, opportunities to study, discuss and consider, on a regular basis and with others, the real source of this Nation's spiritual strength. . . .

Our Nation has survived the sixties. Save perhaps for that of a century ago when the Union was rent by civil war, no decade in the history of the United States has been more fraught with uncertainty, more torn by violence, or subjected more frequently to high peaks of intense emotion. . . .

The guidance derived from study of the Bible has been immense from our beginnings as a Nation. The French observer, de Tocqueville, tells us that the sovereign authority in the United States in the 1830's was religious. He explains that religion exercised little influence ". . . upon the laws and upon the details of public opinion; but it directs the customs of the community, and by regulating domestic life, it regulates the state." De Tocqueville found that there was no country in the world where the Christian religion retained a greater influence over the souls of men than in this one. And he found the average American to be, in his words, ". . . a highly civilized being, who consents for a time to inhabit the backwoods, and who penetrates into the wilds of the New World with the Bible, an axe, and some newspapers." . . .

It is because believe the future of freedom in our Nation--and. therefore, the fate of the entire world-is dependent upon improving the spiritual life of our country--the quality of life, if you will--that I wholeheartedly support the Sunday School as an institution. I believe it has within it the capacity to become an even more dynamic and evangelistic force than it now is. I believe it must reach out in some manner to encompass and enlighten that great body of pathetic young people who, in the main because they are ignorant of Him, do not believe in God and cannot believe in themselves. I refer particularly to the immature and demanding children of affluence. the "Now!" oriented young people, who--because of parental neglect in the area of discipline--have as their sale guides to action only their own wants and desires.
Email Post
Labels: evangelcalism j. edgar hoover magazines primary sources religious conservatism sunday school

Anonymous said…
The denominational magazine for the Brethren in Christ Church (a small Anabaptist-Wesleyan blend) used to re-print "Jedgar" pieces defending Sunday schools in the 1950s and 1960s -- I would assume other denominational magazines would do the same. (Although I don't know the original source, it was probably something like Christian Life, Christian Herald, Moody Monthly, etc.)

I did the same kind of double-take when I first saw the Hoover pieces -- mostly because the BIC had doctrinal prohibitions against voting, political office-holding, etc., well into the 1950s... but also because, well, it was Jedgar defending Sunday schools! (He claimed they protected young people from "delinquency.")
October 27, 2010 at 10:55 AM

Brantley Gasaway said…
Here's another J. Edgar Hoover sighting. In 1961 he endorsed a series on "This Godless Communism" published in Treasure Chest, a monthly comic book distributed by the Catholic Guild to parochial schools.

In classes I have used the first issue (which begins here and contains Hoover's endorsement) to illustrate the ways in which both political and religious leaders interpreted the Cold War as a religious conflict. This pop culture artifact is well worth your 5 to 10 minutes.
October 27, 2010 at 11:24 AM

Randall said…
Devin and Brantley: Thanks for the additional sources. Someone should collect all these together for an on-line exhibition: "Onward Christian Cold Warrior!"
October 27, 2010 at 4:56 PM

esclark said…
When I saw this, I also immediately thought of "This Godless Communism" and Hoover's endorsement. It's not the only Catholic Cold War comic book that mixes in some politics, another is "Is This Tomorrow: America Under Communism" from 1947. "Onward Christian Cold Warrior!" is right. This stuff emerged in really interesting places. A small piece of self-advertisement: I found this stuff so cool (to use academic jargon), I wrote an article last year for the Journal of Religion and Popular Culture on comic books, Catholicism, and the Cold War.
October 28, 2010 at 7:12 AM

Rusty Hawkins said…
Randall,
In my history of modern evangelicalism tutorial I'm having students read entire volumes of _Christianity Today_ from various decades for their research projects. In flipping through a student's research notebook yesterday I noticed that Hoover has an entire series of anti-communist articles that began appearing in CT in October 1960. The titles are: "The Communist Menace: Red Goals and Christian Ideals"; "Communist Propaganda and the Pulpit"; and "Soviet Rule or Christian Renewal?" J. Edgar was apparently a busy dude!
October 28, 2010 at 12:39 PM

Susan said…
Is that great body of pathetic young people that J. Edgar refers to in the article, now pathetic grandparents or did we change into Sunday School teachers like I did?
October 30, 2010 at 9:24 AM