God in America Alongside the Myth of American Religous Freedom

I'm working up a more coherent response to the God in America series, and hope to have that up soon. Over at Killling the Buddha, Nathan Schneider is live-blogging the series (last part is tonight), with Stephen Prothero (a major commentator on the series) and others joining in the fun, so check that out if you want to chat about the show while watching it.

For those of you (I'm talking to you pesky scholars here, especially, but others will be interested) annoyed at something of fundamental importance missing in the series, or of the treatment given to some individual or episode, make sure to check out the full website accompanying the series. It's full of detail, and presents a more complex and satisfying narrative than is possible in a documentary that, of necessity, has to distill and narrate in very broad strokes. For those of you wanting to use clips from the film for class, the author interviews, background stories, and further narrative provided in the "study guide" available at the website will be indispensable in enriching students' understanding. As some have noted here, this is basically a series about religion and public life (that's the subtitle to the series, in fact), but it could certainly be used as a springboard to lead students to explore other avenues of religious expression (music, art, interior experiences, religion and the body, and numerous others) that the film does not attempt to cover at the same level it devotes to the "intersections" of religion and public life.

As it happens, I'm watching the series while having just finished David Sehat's forthcoming book (out this January from Oxford) The Myth of American Religious Freedom, and Sarah Barringer Gordon's The Spirit of the Law: Religious Voices and the Constitution in Modern America. If God in America is basically a story of religious liberty and freedom and their effects on religion in public life (and is at times, as John Fea writes below, a pretty Whiggish version of that story), Sehat's and Gordon's books taken together tell a story of the coercive nature of what Sehat calls the "moral establishment," and the struggles of religious dissenters (including in David's book the abolitionists, Stanton and early feminists, Mormons, progressive intellectuals, and others; and in Gordon's book everyone from the Jehovah's Witnesses to Elijah Muhammad to Beverely LaHaye and the Concerned Women of America to gay religious activists arguing on behalf of same-sex marriage) to articulate a fundamentally different vision of freedom than that establishment wanted to allow. Taken together, both of them present a kind of intellectual and social history of how people dealt with the abstract concept of religious freedom from the Founders down to the 2000s. They are both dealing with a basic contrast in what Gordon calls legal (or "technical") constitutionalism versus popular constitutionalism, and with the broad forces that have fundamentally altered constitutional "regimes" in different periods of American history. I hope in the future to post here an author interview with Sehat, and further thoughts of my own on the social history of what "religious freedom" has meant in American history, a subject I aim to write a book about one of these days. 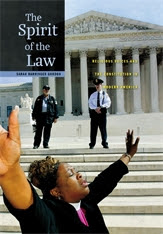 ogged a bit before about Gordon's work, which is out and available from Harvard (having now read the book, I commend it to you wholeheartedly; apart from the intellectual content, it's really a fun read, and to say that it covers a "big tent" of fascinating and often ornery and cantankerous characters is putting it mildly).

As for Sehat's book, he's been producing a series of blog posts over at U.S. Intellectual History, where he outlines and develops some of his themes. His posts are a real intellectual treat, so check them out as a preview of the book; here's a brief description from Oxford:

In the battles over religion and politics in America, both liberals and conservatives often appeal to history. Liberals claim that the Founders separated church and state. But for much of American history, David Sehat writes, Protestant Christianity was intimately intertwined with the state. Yet the past was not the Christian utopia that conservatives imagine either. Instead, a Protestant moral establishment prevailed, using government power to punish free thinkers and religious dissidents. In The Myth of American Religious Freedom , Sehat provides an eye-opening history of religion in public life, overturning our most cherished myths. Originally, the First Amendment applied only to the federal government, which had limited authority. The Protestant moral establishment ruled on the state level. Using moral laws to uphold religious power, religious partisans enforced a moral and religious orthodoxy against Catholics, Jews, Mormons, agnostics, and others. Not until 1940 did the U.S. Supreme Court extend the First Amendment to the states. As the Supreme Court began to dismantle the connections between religion and government, Sehat argues, religious conservatives mobilized to maintain their power and began the culture wars of the last fifty years. To trace the rise and fall of this Protestant establishment, Sehat focuses on a series of dissenters--abolitionist William Lloyd Garrison, suffragist Elizabeth Cady Stanton, socialist Eugene V. Debs, and many others. Shattering myths held by both the left and right, David Sehat forces us to rethink some of our most deeply held beliefs. By showing the bad history used on both sides, he denies partisans a safe refuge with the Founders.

It's been a fascinating exercise comparing and contrasting the vision presented in these two wonderful books alongside the (mostly) more optimistic story spun out in the film. It's sort of an exercise in narrative and counter-narrative. More on that in the coming days.
Email Post
Labels: alternative religious traditions documentaries First Amendment Islam in America religion in colonial America religion in contemporary america religious liberty