This guest post comes to us from Chris Cantwell, a graduate student studying 19th- and 20th -century religious history with Derek Chang and Nick Salvatore at Cornell University. He was also just named the Assistant Director of the Dr. William M. Scholl Center for American History and Culture at the Newberry Library in Chicago. His work focuses on the relationship between people’s devotional practices and political engagements. His dissertation, “The Bible Class Teacher: Piety and Politics in the Age of Fundamentalism” examines the history of the Adult Bible Class Movement through a microhistory of an unknown, relatively unimportant, but amazingly well-documented Bible class teacher and his Bible class on Chicago’s West Side. Here he looks into the fascinating world of the American child preacher and asks some provocative questions about the practice and meaning of this phenomenon.

You see them and you initially laugh. The grainy footage and shaky camera work suggest what you’re watching may very well be an entry for America’s Funniest Home Videos, so of course it’s not serious. But then the clip plays on. And on. You’re now laughing with a little less fervor as 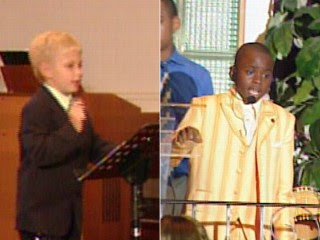 bewilderment slowly pushes humor to the side. You even have a serious look on your face. As the clip passes the two or three minute mark, you suddenly realize that while the YouTube user who posted the clip may have meant it as a joke, the individuals who originally produced the video did not. This is for real. You’re no longer laughing, but focusing; watching the diminutive figure pace and pound and shout with rage far beyond his—and it usually is his—age. But the kicker is not even the video’s main character. It’s his audience. By the time you’ve come to the conclusion that this six-year-old child is, indeed, preaching, you’re confronted with the cheering, clapping, supportive adults who surround the child and encourage not only his message but also his wild performance. It’s like a grade school play, but with fire and brimstone. And no one’s acting.

Child preachers are often the wacky sideshows of American religious history, confined to the fringes of American religious life. They purportedly stand outside the devotional lives of most “ordinary” believers. Indeed, the history of childhood has been around for some time now and has shown that the Sunday school movement, the Y’s, the Boy Scouts and, of course, Horace Bushnell did not exactly clamor to have children practice homiletics. Rather, as the brunt of the scholarship suggests, the motives behind the founding of these organizations were to shelter children from the vices and traumas of the adult world of work, prolong their innocence, and thereby delay their maturation. “This is exactly what the Young People’s Society of Christian Endeavor seeks to do for everyone of its members,” wrote the Reverend Francis Clark in 1902, the founder of that ubiquitous organization of American Protestant childhoods. “It sets them about doing things and thus tides them over the critical period of adolescence, the years of storm and stress and doubt.”

Absent from this narrative of American Protestant youth, however, are not just child preachers but children generally. Children as agents with their own ambitions, anxieties and religious imaginations are often as scarce in the history of American religion as child preachers are in American history. Of course, this lacuna is largely the result of a dearth of sources. Children often did not scribble down, much less understand, their own religious worldviews.

Even if they did, such artifacts typically ended up on the family refrigerator and never made it to the archives. But sometimes kids do leave traces. In a 2007 Church History article (favorably mentioned on this blog), E. Brooks Holifield found in a number of antebellum children’s diaries that kids paid surprisingly close attention to their ministers, reflected on their teachings and, in some instances, emulated ministers. In my own research on a number of Sunday school workers at the turn of the twentieth century who were lifelong church members but never rose above laymen, I’ve been impressed by how many of them had aspirations to take to the pulpit in their youth, some as young as six. According to their recollections in later years—admittedly a less reliable source—most willingly and eagerly mounted the stage in the late nineteenth century to give sermon-like addresses before Baptist, Presbyterians, and Methodist congregations. But what has really surprised me in charting the childhoods of these women and men is just how many opportunities local churches provided for children to preach. Sabbath school anniversaries, holiday celebrations, decision days, rallies, monthly Sunday school concerts, quarterly temperance lessons, and especially Children’s Days all demanded spiritual performances from children in ways that mimicked adult worships practices. As much as we’ve interpreted Protestant ideologies of childhood to inflate the innocence of children to Precious Moments-like proportions, there was also a strand of local church culture and evangelical parenting practices that expected, or at least promoted, a kind of spiritual precocity in children.

I’m curious if the religious lives of children have similarly haunted the research of other readers. In a recent query on H-AmRel from BlogMeister Randall Stephens on the denominational acceptance of child preachers, listserv members offered a lengthy list of diverse figures from Bob Jones to C. L. Franklin who both literally and figuratively cut their teeth behind the pulpit. The lived religion of childhood certainly wasn’t something I was expecting to focus on when I began my dissertation, but it has become a central component to many of the arguments I try to formulate. Perhaps by better situating children and their interpretive imaginations in our studies we can deepen our understanding of generational change and stability in America’s religious communities. Taking children and their spiritual aspirations seriously may also help contextualize child preachers and the bemused contempt they perhaps unjustly receive. For when longtime Sunday school worker Asa Bullard worried as early as 1876 that the plethora of church events that forced kids to speak or recite Bible verses threatened to “make an exhibition of the children,” one has to wonder just how much the difference between child preachers and other Protestant children was one of degree rather than kind. Just ask any Protestant who, as a youngster, earnestly, but ultimately unwillingly, performed in church musicals throughout much of their childhood. That, however, would require a very different kind of blog post.

Anonymous said…
another great post from another new blogger here. WOW! great and fascinating work.
September 17, 2010 at 9:45 AM

Anonymous said…
Du Bois spent an awful lot of time thinking about children and childhood - in addition to his own church/spiritual experiences. Maybe a post (if I can ever finish the next project). - Ed
September 17, 2010 at 11:59 AM

Unknown said…
Thanks for the kind word, Prof. Blum. I'd be interested to know how, if at all, the religious childhood of W.E.B. DuBois presented problems or opportunities for you in working on that book. Perhaps it's worthy of its own blog post. (re-posted to fix egregious grammatical errors)
September 17, 2010 at 12:03 PM