The Roots of Contemporary American Political and Religious Conflict

[Cross-posted from the THS blog]

Last year I used Rick Perlstein’s lively, entertaining, and insightful Nixonland: The Rise of a President and the Fracturing of America for a course I teach on America in the 1960s. The

students loved it. Perlstein’s dramatic narrative pulled us in.

At the outset Perlstein observes that by 1972 a sharp division existed between "'people who identified with what Richard Nixon stood for' and 'people who despised what Richard Nixon stood for' . . . Richard Nixon, now, is long dead. But these sides have hardly changed. We now call them 'red' or 'blue' America, and whether one or the other wins the temporary allegiances of 50 percent plus one of the electorate--or 40 percent of the electorate, or 60 percent of the electorate--has been the narrative of every election since." The book is compelling on a number of levels. Yet it lacks an appreciation for ways that America had been deeply divided in other eras.

Is the culture war that feeds our current political debates all that new? Hasn't America been split between warring factions for eons? Enter Barry Hankins. His new book Jesus and Gin: Evangelicalism, the Roaring Twenties, and Today's Culture Wars, spans over that rowdy decade and offers insight into ongoing political and religious conflicts.

The era from the 1930s to the 1980s, an era of relative religious stability, Hankins suggests, may have been the aberration. The pitched battles over immigration, alcohol, Darwinian evolution, obscenity laws, and 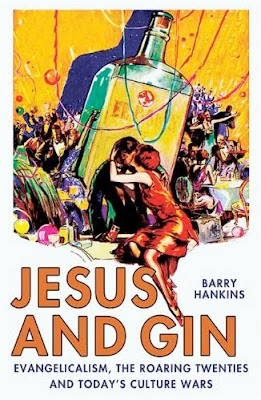 public morality that riled Americans in the 20s "were a prologue to our own age," says Hankins. Like our era that period was "a time when religion was culturally central, participating fully in politics, media, stardom, social life, and scandal." Sister Aimee Semple McPherson, Daddy Grace, and Father Divine elbowed Charlie Chaplin, Al Joslon, and Clara Bow for newspaper headline space. (BTW, Matt Sutton gives it a great blurb.)

Hankins leads off with Warren Harding’s moral failings, "more repulsive than evil" in the words of a biographer. "There is a sense in which Harding’s story is the story of America during the Roaring Twenties," he remarks. The baptist president's religious life was thin, to put it mildly. His administration’s contempt for law, its moral degeneration, and the scandal that swirled around it defined the nation as well. Hankins similar treatment of moral crusades, scandalous religious leaders, and heated contests between liberals and conservatives has a contemporary ring to it.

History written through the eyes of the present, I’ve noticed, draws students in to the debates. Hankins does this well throughout Jesus and Gin. Hence, he notes that Edward J. Larson’s account of the Scopes Trial, "Summer for the Gods could not have been written between 1930 and 1980 for in that period the Scopes legend was taken for granted." In many ways the book is a comparative history that moves with ease between the Christian Right of the Reagan years and the late-Victorian moralizers of the 20s. (Though Hankins does note that there is no simple liberal-conservative split in the age of flappers and speakeasies.)

Hankins fittingly ends his with a rumination on "How the Roaring Twenties Set the Stage for the Culture Wars of Our Own Time." The major struggles of our era have roots that go back decades.

Like Perlstein’s sweeping history, Hankin’s book draws attention to the deeper political and religious clashes that shape current debates. Both are great reads and both would work well in the classroom.
Email Post
Labels: 1920s culture wars prohibition randall's posts religion and politics religion in the 1960s religious conservatism

Kelly J. Baker said…
Randall, this is a great post, and I just ordered my copy of _Jesus and Gin_. I found your post this morning as I was writing/reflecting on how the Klan and the 1920s are the foundations for the current "culture wars." (There is also an argument about the Klan as a beginning for American conservatism too, but that is for much later.)