The Fellowship of Christian Statesmen: From New Contributor Blake Renfro! 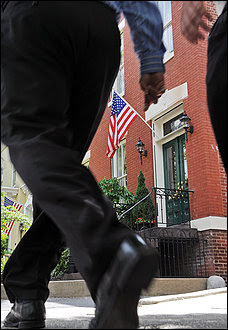 Today's post comes from another new contributor (a banner week for us along those lines): Blake Renfro, a graduate student working with Gaines Foster at Louisiana State University. Welcome, Blake!
The Fellowship of Christian Statesmen
by Blake Renfro
A short distance from our nation’s capital there is a modest old row house. A cohort of senators and congressmen live in the house while working in the city. They write their modest rent checks to a decidedly inconspicuous entity known as the “C Street Center.” A recent article in The New Yorker by Peter Boyer, entitled “Frat House for Jesus: The entity behind C Street,” examines the powerful evangelical group that owns the house. (Click here for an older Washington Post article on the same house).

“There’s this whole Washington phenomenon, related to access to power and the aphrodisiac of power,” says one of Boyer’s sources. This observation seems fair. Political culture is defined by ambition and status, but its concomitant religious culture proves more elusive. Ostensibly, individuals like Billy Graham and his successor Rick Warren address the nation’s moral conscious, while acting as personal counsel to the Washington political elite. Boyer’s article reveals a religious entity that seemingly defies this assumption. The C Street row house is one such facet of Washington’s religious culture that both caters to power and eschews it at the same time. The house is an ideal part-time residence for legislators, but it is also an “accountability group,” of politicians who “have pledged to hold one another to a life lived by the principles of Jesus.” The ministry that owns the house is partly funded by an organization known as “The Fellowship.”

The Fellowship was created in the 1950s. According to Boyer, it has become one of the most important evangelical organizations in Washington. Those of us familiar with religion in American life, know that religious groups of every type have lobbyists and activists on Capitol Hill. Born during the height of postwar ecumenism, The Fellowship sponsored the National Prayer Breakfast under the Eisenhower Administration, and it continues to this day. Of course, the main question is: Why haven’t we heard more about this organization? The answer is fairly simple. Doug Coe, the organization’s director for forty years, makes a concerted effort to keep the ministry out of the press. With a fairly modest budget of fifteen-million dollars, Coe and his small staff contribute to a variety of causes in Washington and throughout the world. Yet, the majority of their work “is interpersonal ministry to the powerful.” The Fellowship has established numerous small prayer groups throughout the city, which bring together politicians and bureaucratic officials. Unlike the preaching of more public evangelicals, Coe’s brand of Christianity is less concerned with salvation. The Fellowship focuses on shaping the morality of power and influence. Washington’s political culture might seem immoral, but Doug Coe believes he can persuade the powerful to live a life of humility and good character. He has won accolades from Ronald Reagan, Al Gore, Hillary Clinton, and many others.

Critics charge that The Fellowship is a secretive organization which hinders democratic ideals. In a recent interview on Fresh Air, the writer Jeff Sharlet suggests the organization has supported Ugandan legislation which would make homosexuality punishable by death. Sharlet ignores the rather broad reach of Doug Coe’s ministry, arguing that The Fellowship is merely a fringe movement that “recasts theology in the language of empire.” There might be some truth to this observation. But, The Fellowship has earned the respect of nearly every powerful politician in Washington. This phenomenon encourages us to reconsider the intersection of political and religious culture. Sometimes powerful leaders find solace from unlikely companions.

The C Street row house, despite its flaws, illustrates how democratically elected leaders seek resolution in their political differences. Boyer movingly recounts how, in the spring of 2000, Congressman Bart Stupak’s son committed suicide after a high-school graduation party. Laying their differences aside, his housemates from C Street comforted their friend. Tom Coburn, who accompanied Stupak to view his son’s body, concluded that, “There was no decision to be made. I mean, we had to get to Bart and just be there to support him. We had a contingent of ninety members of Congress come to the funeral. And what they got to see was something they hadn’t seen in a long time: Here’s three Republicans and two Democrats lovin’ a brother through a problem.”

January said…
My choices seem to be whether I believe the Peter Boyer version or the Blake Renfro version. The comment by Renfro that the Fellowship has "the respect of nearly every powerful politician in Washington" persuades me that Boyer comes closer to the truth and that Renfro is transmitting the public relations handouts of the organization.
September 16, 2010 at 12:31 PM