Paul Harvey
We've got another post or two underway about the current predictable response to the proposed Cordoba Center (no, not a "mosque at Ground Zero") in lower Manhattan. I found this video tour most instructive -- a photo collage of some of the other establishments which currently reside on the "hallowed ground." Maybe Newt Gingrich has visited some of these, who knows?
[A side note: nothing in this blog post should be taken as a criticism, in the slightest, of the great 1970s glam-punk band the New York Dolls, whose work paved the way for one of my all-time favorite film musicals: Hedwig and the Angry Inch. If you haven't seen it -- do. Right now. The

last song on the film/soundtrack, "Midnight Radio," is a glorious religious statement about the power of music to help one rise above the circumstances].
More seriously, amidst the avalanche of web material on this tiresome, ginned-up pseudo-controversy, the single best analytical/historical piece I've seen comes from Kambiz GhaneaBassiri, up at Religion Dispatches; click here for it. The author puts this controversy properly in the historical context of the hysterical anti-Catholicism in the 19th century and other like episodes, traces some of the history of Muslim institutions in America, and ends optimistically: 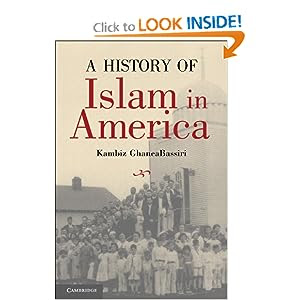 It suggests that the proposed mosque and community center, which is modeled after the New York YMCA and Jewish Community Center, is a continuation of century-old efforts at community building and an attempt to represent Islam in lower Manhattan as American Muslims have understood and experienced it rather than through the actions of terrorists. The decision to allow the building of the mosques and community center is yet another episode in American history that moves us closer to the realization of our nation’s founding ideal of religious pluralism and freedom amidst a din of protests.
Ghaneabassiri, who teaches at Reed College, is the author of A History of Islam in America: From the New World to the New World Order (Cambridge, 2010) -- I had not seen or even heard of this text, but definitely looking forward to checking it out now.
Ghaneabassiri ends more optimistically than I would: the "founding ideal of religious pluralism" referred to was a lot more contested than that. And the incredible string of hateful commentary that has followed posts by Stephen Prothero and others over at CNN Belief Blog and other like places suggests something about the extent of religious hatreds prevalent today.
On the other hand, as Prothero points out in his latest post, Presidents Bush and Obama and Mayor Bloomberg have all rejected throwing out the politically expedient red meat of Islamophobia even when given the chance to do so. Some of Bush's statements were pretty remarkable in this regard, coming in close proximity to the 9/11 event.
Some other blog contributors here have more to say about this, so I'll turn it over to them. In the meantime, take that video tour, it's a nice respite from hallowed ground hyperbole.
Email Post
Labels: assholes First Amendment islam Islam in America religion in urban america religious tolerance and intolerance

Christopher said…
I'm exhausted from arguing about the mosque, so I'll just take the opportunity to plug the documentary _New York Doll_ about bass guitarist Arthur "Killer" Kane's conversion to Mormonism. It's a fantastic film that would work well in a class on music and religion.

Paul Harvey said…
Chris: Yes, totally, I had forgotten about that documentary but did see it a while back. Really fascinating. It's up there with Queen's guitar player turned astrophysicist, whom I heard recently interviewed and, with all his brilliance, could give no explanation for some of the stranger lyrics in "Bohemian Rhapsody."