Frankly, my dear, I don’t give a Franciscan

Linford D. Fisher
It used to be a bad word. “Franciscan.” Well, for colonial historians, at least. I mean, really, with a full-out colonial missions program to American Indians that was inescapably ethnocentric at best (even if well intended) or disturbingly malevolent at worst, Franciscans have usually been at the religious center of the so-called Black Legend with their forced labor and corporeal punishment of Natives in Florida, New Mexico, and California. This is particularly true vis-à-vis the typical scholarly praise concerning the relatively tolerant, culturally sensitive missionizing undertaken by the Jesuits in the colonial period. The classic, “recent” touchstone on the depredations of the Franciscans in the New Mexico context is, of course, Ramon Gutierrez’s When Jesus Came, the Corn Mothers Went Away (1991). Despite the various criticisms that have subsequently emerged, this text is seemingly here to stay. It is a gripping narrative, to be sure. Who couldn’t help but cringe at his lengthy recounting of the eighty years of Franciscan evangelization prior to the Pueblo Revolt in 1680 that included overt sexual exploitation and humiliation?
When David J. Weber—the leading scholar in borderland studies—sadly passed away earlier this week, I pulled out his classic, The Spanish Frontier in North America (1992) to remind myself of what Weber contributed to all of this. Surprisingly, his account is comparatively even-keeled, even though he did label Franciscan missions as “but one of the oppressive frontier institutions of the Spanish state” (121). 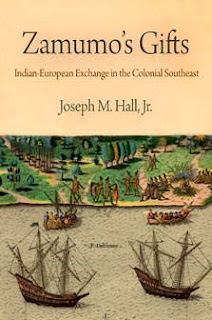 But is this view changing? Of course. It has to. This is the historical profession, after all, and many tenure cases are hanging on the successful revisioning of the minutiae of every field. A book I just finished while on a research vacation (an oxy-moron if there ever was one) with the family reminds me that the historical view of Franciscans is slowly changing: Joseph M. Hall, Jr., Zamumo’s Gifts: Indian-European Exchange in the Colonial Southeast (2009). To be sure, the book is really about the importance of Native conceptions of exchange in trumping and shaping European notions of commercial trade well into the eighteenth century. Nonetheless, the Franciscans take center stage in at least one chapter, since their missions among the Apalachees in the 1600s open up avenues for Spanish exchange and trade with inland Natives. Hall seems to almost minimize the effect of the Franciscans, essentially arguing that the missionaries had little control over the Timicuan and Guales as a whole: “The simple fact remained that Indians in and beyond the missions remained in control of the region. Although missionaries introduced a host of new coercive forms into Guale and Timicuan life during the early seventeenth century, including restrictions on their movements, a greater regimentation of diet, and more frequent corporal punishment, such impositions weighed relatively lightly on most of their charges” (61). This was in part due to the enormous numerical differential that often gets overlooked: in 1630 there were 27 missionaries for 50,000 Timicuans and Guales. For myself, I wonder if his assessment does not take into account the practical, on the ground imperial weight and presence the missionaries and their regional military and trade counterparts represented. In the end, however, Hall still agrees with archaeologist Jerald Milanich that “missions were colonization” (53).
Nonetheless, Hall is not alone. Franciscan pacification/colonization is looking far different in various geographical regions. Steven W. Hackel in Children of Coyote, Missionaries of Saint Francis (2005) was surprised to find that Indians in southern California had far more autonomy in Franciscan mission towns than he expected—even producing surplus crops for their own economic benefit. Another study that will be soon forthcoming by my colleague at Brown, Amy Remensnyder, on the various uses of the Madonna in late medieval and early modern conquests in the Old World and New, also highlights the Franciscans in the New World context. And, somewhat similarly, she is more interested in what Franciscans and the Spanish do and how they operate than she is in taking them to task, once again, for the many injustices that historians have rightly pointed out.
Then again, perhaps the Jesuits’ fortunes are changing, too, but for the worse. Emma Anderson’s The Betrayal of Faith (featured here on this blog) turns historiographical wisdom concerning the Jesuits on its head. In her retelling, the Jesuits (and Paul LeJeune in particular) come across as just as intolerant and demanding as their Franciscan/Recollet counterparts.
These developments, of course, are part of a much larger re-casting of missionaries among Native Americans in the wake of earlier and important ethnohistorians like Francis Jennings and James Axtell. David Silverman, Rachel Wheeler, and Richard Cogley are just a few examples of the ways in which historians have increasingly asked different, native-centered questions to provide a more nuanced emphasis on Natives’ creative agency instead of cataloguing the sins of the European evangelists. A terrific-looking book that is due out in a month will likely add to this ongoing conversation: Joel Martin and Mark A. Nicholas, eds., Native Americans, Christianity, and the Reshaping of the American Religious Landscape (UNC, Sept. 2010).
All of this simply serves as a reminder that history is, first and foremost, an interpretive enterprise, and that how we view things, people, movements, and events can—and must—change over time. In the meantime, thanks for a terrific corpus of scholarship, David J. Weber. RIP.
Email Post
Labels: lin's posts native american religion new books religion in colonial America