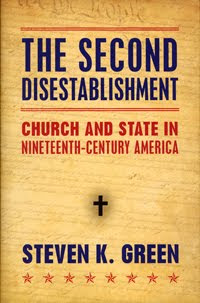 Chris Beneke
I just finished Steven K. Green's The Second Disestablishment: Church and State in Nineteenth-Century America (Oxford 2010). My hunch is that the book will end up on the shelves of Supreme Court justices and their clerks, not to mention religious historians (who will probably use the library's copy) and constitutional law scholars (who can probably afford to buy their own). We needed a comprehensive account of the relationship between civil government and religion from the founding period through the early twentieth century. Now we have it.
The Second Disestablishment's title and subtitle are misleading. The first quarter of this thick volume is devoted to late eighteenth-century America, the era of what Green calls the “First Disestablishment.” It lasted from 1775 through 1833, though most of the critical work was accomplished by 1790. (Massachusetts, with its town-centered system of church support, was the chief laggard, stretching the national story of constitutional disestablishment out until 1833.)
Green takes the interpretive fight directly to those (generally called "Accommodationists") who maintain that the early federal system was designed to preserve existing, nonpreferential state establishments of religion. He makes a persuasive case that instead of buttressing publicly supported religion in the states, the Constitution and the religious clauses of the First Amendment actually sustained the states' momentum toward disestablishment.
Historians use the term "disestablishment" to describe the end of state support for churches and state-enforced religious doctrine. Green has a broader conception (a forthcoming book by David Sehat may take a comparably broad view). For Green, disestablishment also included the de-Christianization of the common law and the secularizaton of educational policy. The story is generally progressive: there was more evidence of disestablishment at the end of the nineteenth century than there had been in the late eighteenth or mid-nineteenth century. Still, what he calls "legal" and "cultural" disestablishment--the Second Disestablishment--followed a less direct trajectory than the First, constitutional disestablishment. In fact, the notion that Christianity was integral to the common law did not reach its apex until the antebellum period. As a consequence, anti-Christian remarks were still prosecuted and non-Christians still barred from serving as witnesses through the Civil War era.
A major turning point occurred in the middle decades of the nineteenth century when judges began to demand that prosecutions for blasphemy, Sabbath violations, and profane swearing be shown to constitute a discernible public “nuisance." For their part, Sabbath laws themselves were increasingly treated as contributions to public health and welfare, rather than divine injunctions. (When else would laborers rest, and how else were you going to keep them out of the pubs on Sunday?) At the same time, Bible reading in the schools was given secular justifications (Where else would children be taught morality?) and gradually abandoned. Law and culture were both de-sanctified.
The Second Disestablishment is judicious in its use of evidence, with only a few excursions into polemics. The argument flows easily from Green's detailed study of legal opinion and court decisions (more than 400 cases apparently). Along the way, he takes aim at another distinguished legal historian, Philip Hamburger, whose Separation of Church and State should be read in conjunction with this one. The debate over the history of church and state in America won't end with this book. But it just might be more interesting, and better informed.
Email Post
Labels: 19th Century beneke's posts books church and state disestablishment long overdue promises to paul harvey

Randall said…
Chris: Thanks for the review. Books like this one--along with the work of Sehat, Formisano, and others--make the est/dis-est process seem far more interesting than I had thought it was. An ebb and flow to it, right?
August 13, 2010 at 8:33 AM

Chris Beneke said…
Hey Randall--My pleasure. This book, along with Formisano/Pickering and Sehat are going to change the way I frame disestablishment for my students. We'll see if they can stand another day devoted to the late 18th and early 19th centuries ...
Chris
August 14, 2010 at 10:13 AM