Meditations on a Classic, or, American Religious History in the 21st Century

As I've mentioned before, I'm spending the summer working through that wonderful mid-Ph.D-program rite of passage: studying for qualifying exams. I've also just finished another rite of passage for students of American religious history. I read Sydney Ahlstrom's A Religious History of the American People, all 1096 pages of it. Halfway through Ahlstrom, though, I took a day off to re-read Thomas A. Tweed's edited volume Retelling U.S. Religious History for a summer reading group. Then I picked Ahsltrom back up and finished. It was an odd pairing.


I'm not here to write a review of the 38 year old Ahlstrom book or the 13 year old Tweed title. Rather, I want to make a few observations about both books from my position here and now--in 2010--as a young student of American religious history and propose what might be the next step beyond Ahlstrom and Tweed. If this post seems rambling and pointless please indulge me. This is an exercise in writing out thoughts ignited by the exam reading.

To begin with, I think it's important to note that both books, throughout my training at least, have been more than books. They've been symbols. Ahlstrom's text stood as the symbol of the greatest attempt at a master narrative. It was the greatest of the "old-school" surveys of American religious history. Before I actually read the book, A Religious History represented a mostly male, white, Northern, mainline, Protestant master narrative. Having finished it, the main story I remember is one of mostly white, Northern, mainline, Protestants. Well, that and Puritans. As Sidney Mead put it, Ahlstrom was possessed by the Puritans. Similarly, the Tweed book symbolized the anti-Ahlstrom. First of all it was multivocal--an edited collection--so it destabilized the unified narrative voice. Second, it wasn't a narrative at all. It was a mix of theoretical musings and case studies. Finally, the eight essays covered anything but white, Northern, mainline, Protestant, men. It symbolized all that was sexy and fun about the study of religion in America in the past two decades.

More importantly, Retelling, was my kind of religious history. I had been assigned parts or the whole of the book in at least two classes I've taken in my eight years of grad/undergrad study. I had taken a seminar with one of the contributors and read articles or books by most of the others. These were the scholars I "grew up with." 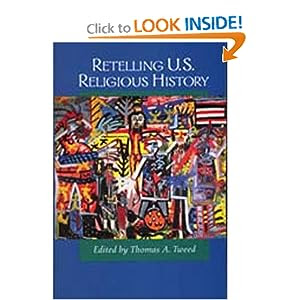 All this is to say that I went into my reading of Ahsltrom with a somewhat belligerent and skeptical attitude, knowing that in a few days I'd get to stop and enjoy re-reading and discussing Tweed with like-minded grad student friends. So, like a toddler whose told that the carrots are good for him and that he can have some cookie if he finishes them, I jumped into Ahlstrom.

I was surprised. Up front Ahlstrom admits the need to broaden the narrative beyond white liberal Protestants: "I do not belive that the necessary illumination can be provided by "church history" in its classic forms...So a broader stance, a wider conception of the "rule of charity," is essential and, and this sympathy must be extended far beyond the explicitly Judeo-Christian traditions. Not least it much include the propensity of Americans to view the state itself in a religious light." In his attempt to account for the "varied religous movements" of American history he lays out four guidelines. First, the need to place religious history within world history. Second, the need to extend "religion" as a category to account for "'secular' movements and convictions, some of which opposed or souht to supplant the churches." Third, attention to radical diversity of religions in American history. And finally, the social context, namely the "demographic, economic, politlcal, and psychological dimensions."


This isn't old school, is it? Broadening beyond church history, a focus on diversity, thinking in terms of world history--or what we would call trans-nationalism, accounting for secular/cultural/civil religion and keeping things in social context? This all sounds quite familiar. In his introduction, Tweed notes the need for narratives of American religious history to account for "contact, boundary, and exchange" as well as various social and geographic sites. Ahlstrom's four guidelines seem to at least attempt to move toward Tweed's retelling. My point here is that the two books have much more in common than I was ever led to believe.


Beyond their similarities, reading both of these books in 2010 offers another reminder of the ways history cannot escape its present moment when it reflects back on the past. Ahlstrom argues that "each generation can only say that a different portion of the past is open for its examination, that is angle of vision is altered, and that new standards of explanation and relevance prevail. A new present requires a new past." Tweed is not as obviously concerned with the needs of the present, but he is aware of "many stories to tell, man sites from which to narrate them, and many motifs to order the plots." His book provides "interesting angles of vision on the history of religion in the United States." Ahlstrom was writing at the end of the 1960s. A series of cultural explosions, the new emphasis on difference (to be followed in later decades by its sexier French cousin "differance"), and a radical decentering of religious cultures in America led to a giant monograph trying to wrap all of these eruptions and disruptions up into a single story--albeit a Puritan story. Likewise, in the 1990s, with the ideals of multiculturalism, a new comfort with difference, and the contingency that comes with postmodernity, Tweed's book eschews the unifying narrative, challenges the historian to find more stories or tell the old ones differently, and calls for an awareness of the historian's positionality. Both books answer questions and concerns emerging in their particular moments. They both offered a new past to a new present.


What's now? It's been over a decade since Retelling and almost four decades since A Religious History. What narratives or retellings do we need now, as we head into the second decade of the century. In a recent (and popular) post at the SSRC Thomas Bender argued that public historians, "begin with a common concern, explore the resources our discipline provides for us, and we return with a narrative interpretation, full of interdependent variables and contingencies that implicitly or explicitly point to nodes of possible political intervention. Today, I believe, we can serve the public best by providing historical understanding of the relation of society to the history of the state and our largest non-state institutions, particularly the corporations that dominate our economy and politics." For religious historians, I think this means pushing further than Ahlstrom and Tweed went. This means constructing narratives that account for the "religious" in the relationship between society and the state/non-state institutions. Such projects will follow Ahlstrom's guidelines but push them further than he did, especially in taking seriously the religious qualities of "secular" phenomenon like corporations and the state.

While, like the authors in Retelling, we need to continue to find new ways to tell American religious history, we also need to evaluate the multiple popular and academic stories we already have. The step beyond Retelling U.S. Religious History is performing an archeology of American religious history. Where do our stories come from? Who do they serve? How does power work in and through their construction? The authors of Retelling do some of this, but their main focus was on new angles and new positions from which to tell the stories. Since Retelling, we've seen 9/11, two wars against Muslim countries, George W. Bush and the GOP's mobilization of the values voter, the first black President, the rise of the Tea Party, the emergence of the New Atheism, and the continued discourses of secularization, science versus religion, and the Christian Nation--to give a short list. Popular and academic narratives about religions in America--what they are, where they fit, what they mean, how they function--abound. We now need to begin the process of evaluating them, not on some measure of historical accurary (though that is important), but on the measure of their politics. Each of these narratives about religions in America's past are also narratives of power. They are about what counts as "religion" or "American."

Sydney Ahlstrom used the trope of the Puritans to tie the fraying loose ends of American religions together and in the process he documented the explosive diversity of religious culture in the United States. Tweed and his contributors told new stories from new locations that included new motifs and characters in the narratives of American religious history. Since then, more and more individuals and groups have told stories about religious culture in the U.S. As I see it, though the recuperative goals of history are not done, more stories can and should be found, it is time to begin a process of evaluation and genealogy. It's time to find out where these stories come from and how power works in and through them. As Jean Baudrillard wrote:


"Any movement which stakes everything on the liberation, the emancipation, the resurrection of a historical, collective, or speaking subject, on a raising of consciousness if not of the unconscious, individually and collectively, is blind to the fact that it is conforming to the system, whose goal at the present time is precisely the overproduction and regeneration of meaning and utterance."

We need a religious history that probes this system of overproduction to find the horizons of meaning at work in the diverse narratives of religious history at our disposal. In short, the next stage of American religious history is not a unifying narrative or a series of retellings, it is an account of power in the stories being told.

Anonymous said…
Great post. My experience is that there is SO MUCH THERE in the "classics." I return regularly to Martin Marty's _Righteous Empire_ and find wonderful nuggets. Or for those folks interested in Civil War memory, take a look at Paul Buck's _Road to Reunion_. It's from the 30s and has amazing material.
July 28, 2010 at 10:32 AM

Anonymous said…
I agree that a greater emphasis needs to be placed on evaluation and genealogy, however I think this will entail employing a new analytical framework since the interpretive limits of social and cultural theories seem to have been reached. I believe Paul Harvey's evolution post provides the answer. Evolutionary theory, which has demonstrated its usefulness in the field economics as a tool to analyze human behavior, will likely also provide the the most functional interpretations of power and the "over"/production and dispersion of meanings.

While evolutionary historical interpretations are still in their infancy (though headway is being made in the humanities) there is still much work to be done. One possible barrier to the acceptance of evolutionary theory by the historical profession is the relative lack of a driving political agenda to energize its proponents. The prominence of both social and cultural history seem to have benefited from the political fanaticism of many of their early practitioners. Hopefully the value giving to diversity and multiculturalism will allow evolutionary theorist to gain a foothold in the historical profession.
July 28, 2010 at 11:49 PM

Tisa Wenger said…
This post is just what I needed this morning. You've reinvigorated my thinking about my current research. Thanks!
July 29, 2010 at 7:41 AM