Heidegger and the Quandary of Insider/Outsider Roles in Religious Research: A Methodological Note

Gerardo Marti
This week afforded me a bit of reading and reflection through Heidegger’s Being and Time as part of my ongoing attempt to grow in my scholarship.
As an ethnographer, I regularly immerse myself in religious communities both short and long term -- see a recent post at Duke Divinity blog about a recent church visit -- and as such am regularly confronted with what was introduced to me as “the insider/outsider problem of religion.” The dilemma centers around a core question: Who is best able to understand religion, the committed or the agnostic? More important, what are the challenges and solutions for achieving a satisfactory understanding of religion (not just for scholars, but for everyone) considering one’s stance? My first attempt to answer this question is printed in an extended appendix of my first book A Mosaic of Believers. But reading that now, and continuing to think on the issue, I’m finding my framing of both the problem and the answer to be much too glib.

My methodological answer there was essentially that immersion in a religious community along with a simultaneous immersion in a scholarly community allows scholars enough “distance” to reasonably comment on issues and concerns of scholars without being unredeemably caught up in the interests and pretensions of any particular religiously committed sphere. It’s a serviceable answer, passes muster for the pragmatic work most social scientists do every day.

Yet I continue to find the issue to be important, not the least of which is that I consider myself to be a religiously committed person. I am not entirely comfortable with the notion of a self that is caught in a back-and-forth motion, swinging between two blatantly idealized communities, and sustaining an assurance that I am able to not only keep these things in check but to truly believe that the doing of such a thing accurately represents our lived experience as researchers.

Looking back on my experience in doing the work of two ethnographies in the past ten years, I find my resonance, my “affinity,” to the churches I studied to contain more complexity than I usually have the time or the patience to consider. Not only did my stance as a sociologist create some tensions with in first study of Mosaic, but then my later relationship to the energetic Prosperity/Word of Faith church Oasis in Hollywood Faith (another article here) produced entirely new ambiguities as many aspects of the religiosity found there does not entirely lie with all my religious sympathies. Especially at Oasis, the boundaries of being an “insider” became so fluid (usually in considering all aspects of figuring out to what degree am I part of these people) that I no longer found the neat division between “insider” and “outsider” I wrote about in my appendix to be so helpful – and that perhaps my articulated stance is dangerously misleading to my scholarship.

This week I’ve been taking a trip through Martin Heidegger’s Being and Time (with help from Magda King) and am once again captured by his articulation of “authenticity” or “owned-ness” of our selves. Heidegger sees our humanity as ever-always caught up in the doing-of-things as we continually project ourselves into the world. But Heidegger’s important nuance is that we “fall” into the world by being so-easily enrapt in the an everydayness among fellow beings such that we don’t ever stop to consider the wider implications of what we are doing (descriptive) or, especially, the possibilities of who we may become (prescriptive) should we grasp onto our available limits within our finitude.

His point is especially important to me as a researcher. Looking back at my initial answer to the question of the “insider/outsider problem,” Heidegger suggests that I may be leading a dis-owned, inauthentic existence in my methodological approach because I merely “fall” into the ways of being within these two communities. On the one hand I take on the lifeways of a religious community, and on the other hand articulate, translate, commiserate with the lifeways of a scholarly community, with my work constantly going back and forth across the in-between void in my person juxtaposing two seemingly “isolated” positions in an endless array until a satisfactory product (Book! Tenure! Career!) resolves itself -- which then propels into a new cycle.

It’s Heidegger’s notion of authenticity and “owned-ness”/"disowned-ness" that’s got me. He’s profoundly right that our normal day-to-day life, even as highly self-aware scholars, is to be caught up in our ways without question. It’s one of the liberating aspects of being historians and sociologists – we come to see through distance how embedded human beings are in the structures of their world without their being conscious of it. And it is the privilege of scholars that we self-consciously reflect on ourselves and our various apprehensions in order not to "fall" easily prey to facile pretensions of what we think we know. I strongly value this primary privilege of scholarship, the ability to embrace our self-reflexivity in productive ways, and I fear that my first answer to the study of religion misleads the earnest task of becoming a more-wholly-self-possessed person who is accomplishing the uniquely human task of carefully considering all the potentialities for yielding insights and knowledge in our world.

Heidegger's point becomes even more salient when I consider the dominating aspects of institutionalization – that human beings ritualize ways of being and knowing in such easy, non-problematic ways. I come to this: If religious scholarship is simply learning to engage the institutionalized spheres of “religion” on the one hand, and then articulate them within the institutionalized spheres of “scholarship” on the other, then we “fall” into highly ritualized ways of being that radically limit the potentialities for our work. Here I will quickly mention Courtney Bender’s wonderful new book The New Metaphysicals (see current dialogue at Immanent Frame) which thoughtfully engages the issues of institutionalization in religious life and in scholarship in a fresh way. The book has got me thinking about a lot of things (It is a wonderful conversational read), and it seems to fit this particular dynamic well. Her focus on “practices” is strategic, and it is perhaps this approach I must absorb even moreso since it appears to allow Bender to be far more “self-possessed” than I feel at the moment. 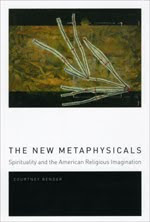 In the end Heidegger stimulates my courage to consider how it is that I regularly constitute my world not merely in my role as "scholar" but as a full person. I no longer wish to maintain a pretense of bounded areas which do not touch one another, especially when I am fully aware that it is “me” (the “I am”) who is engaged in my whole life. Rather than "fall" into a false sense that I am merely receiving and recording on the one end, then resolving and reporting on the other, knowledge in such simple-minded ways, I'm thinking that f I am to continue to grow as a scholar I must take much better possession of my own self and extract whichever awareness with accompanying conceptualizations as best I can so as to more fruitfully participate in truly authentic dialogues with my colleagues and other "beings" around me. It is hopefully taking the best aspects of the best conference sessions with the most stimulating, original, and engaged minds which I've witnessed at conferences and seminars over the years and accentuate that to a much higher degree into my work with friends, neighbors, and (dare say) even my own self.

So, with more historians of American religion engaging in ethnographic practices I thought it might be worthwhile sharing these few preliminary thoughts here. Whether it is Heidegger or the resources from the historian’s craftbox or somewhere else I'm missing, I am in need of a much different conversation on the ability to sustain an “owned” scholarship of religion that respects our ongoing engagement with the world that maximizes the creative potential of our as-yet-unyielded insights.

Crossposted at my Praxis Habitus blog.