Make the Devil Mad, Go to Bob Jones U.

I've been slogging through a chapter that deals with the evolution of the family values agenda, Christian psychology, and evangelical child rearing. It's always harder when one moves further up in time. I feel more secure in what I have to say when the characters I'm writing about 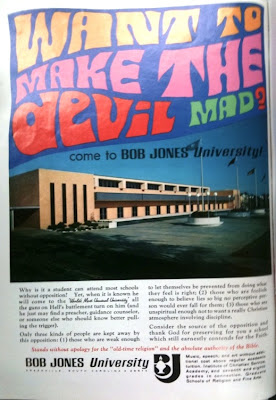 have been dead for at least half a century. (You know, when I'm writing about old time Nazarene preacher "Uncle" Bud Robinson or the Earth-quaker Seth Cook Rees.)

I've spent some recent days reading through issues of Christian Century, Christianity Today, the Herald of Holiness, Christian Life, and Christian Herald. (Evangelicals loved to us words like "herald," "trumpet," "harbinger," and "advocate" in the titles of their mags. What about "liberator" or "dissenter"?) The time frame: 1966 to about 1975. Though this is really recent history I've also been struck by what a distant era this now seems like. Many of the concerns of writers and editors, it's safe to say, are deep in the dustbin of history now. At other times what would amount to a kind of baroque political incorrectness today was no big deal then. Take for example one of the most interesting headlines from one of these magazines (and it wasn't Christian Century): "Good News for Retards."

As I'm thumbing through yellowed copies--always better to look through print versions, I think--I've also been fascinated by the graphics, layout, and general look of these mags. Part Madmen Moderne, part Batman. Evangelicals, even those not so enthralled with Jesus People, quickly adopted the Haight, Op, and Pop Art wildness of the day. So, I include here a couple of my favorites. (Click images to enlarge.) The Bob Jones U. advert from 1968 is priceless! Pat Boone's take on the rapture might be worth more than a gospel car full of gold. 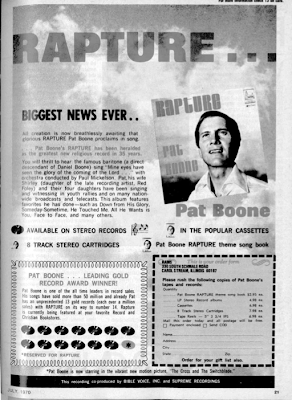 Also, great use of passive voice: "Pat Boone's RAPTURE has been heralded as the greatest new religious record in 35 years." Heralded, see.

That reminds me of a recent news item from the English newspaper, not so affectionately called the Daily Torygraph by some: "Jesus will return by 2050, say 40pc of Americans." The paper picked up on a Pew, The Press/Smithsonian Magazine poll. Brits always like to be shocked by how unlike us they are. Few snakehandlers, supermalls, megachurches, kids with adult diabetes, or WWF wrestlers-turned-politicians across the pond. "41 per cent say Jesus Christ will return within the next 40 years while 46 per cent say this will definitely or probably not happen." 71% also think cancer will be cured by 2050. Are these two items related?

Pat Boone might have been a pop singer only a parent could love, but he was on to something with this rapture business!
Email Post
Labels: evangelicalism magazines millennialism randall's posts rapture religion and art

Paul Harvey said…
We need to have a facebook-style "like" button in our comments section for our "only-Randall-could-have-come-up-with-that" posts.
June 25, 2010 at 8:17 PM