Skip to main content
Labels
Posted by Paul Harvey May 29, 2010

Speaking of Faith in the New York Times 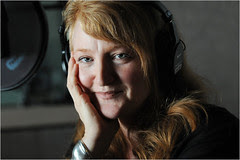 Paul Harvey
Today's NY Times features a nice piece about Krista Tippett, host of the engaging radio program Speaking of Faith (which we've featured a number of times on the blog, including reflections on the show's programs about evolution and religion on television). Tippett and I both grew up in Oklahoma (at almost exactly the same time), the product of conservative Baptist backgrounds, so while we've never met I feel some kinship with the sense of searching that is always palpable on the show. Here's a taste of the article:

Despite being broadcast in most markets in the God ghetto of 7 a.m. on Sunday, “Speaking of Faith” draws nearly 600,000 listeners on 240 stations across the country, a sixfold increase in both measures since 2003. The show also gets 1.3 million downloads a month.

With both a Peabody Award and a best-selling book to her name, Ms. Tippett has become identified with a particular public-radio program the way, say, Ira Glass is with “This American Life” or Terry Gross with “Fresh Air.”

The Tippett style represents a fusion of all her parts — the child of small-town church comfortable in the pews; the product of Yale Divinity School able to parse text in Greek and theology in German; and, perhaps most of all, the diplomat seeking to resolve social divisions.

“My background as a diplomat is as important for this subject as my training as a journalist,” Ms. Tippett, who contributed reporting to The New York Times from Germany in the 1980s, said in an interview in her studio in St. Paul. “Religion is a touchy subject. You’re really getting at the core of people’s identities, an intimate place. This religious sphere in our public life is very charged, and I want to disarm that.

Tippett's recent book Einstein's God features a selection of her radio conversations about religion and science. It's very nice to see Tippett and the program doing so well.