Skip to main content
Labels
Posted by Paul Harvey May 17, 2010

OMG! Jews and Muslims Are Taking Over America! Poor Poor Pitiful Me. 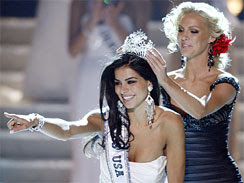 Paul Harvey
First, Patrick Buchanan complains that there are too many Jews on the Supreme Court, and it's about to get worse with Elena Kagan. (N.B.: Someone calculated that 32% of Supreme Court Justices have been Episcopalians, who represent under 2% of the population, but never mind). White Protestants and Catholics are, of course, the "targets of liberal bias."
Now Daniel Pipes is all upset that there are too many Arab-American Muslims such as Rima Fakih winning beauty contests (and yes, of course the Presidency as well) -- heavens, even Anisah Rasheed, the new Miss North Carolina Agricultural and Technical State University! Affirmative action run amok! My oh my, what is the world ever coming to? (Oh, and the runner-up to Fakih, Miss Oklahoma, apparently was "discriminated against" because she said she was a "strong believer in states' rights"; I'm glad to see Confederate shibboleths make an appearance at Miss USA).
I didn't realize Warren Zevon wrote his songs about the decline of American Christianity, but I guess he did:
Well I lay my head on the railroad track,
Waiting on the Double E.
But the train don't come by here no more,
poor poor pitiful me.
Poor, poor pitiful me
poor poor pitiful me
Oh these boys won't let me be,
Lord have mercy on me.
Woe! Woe is me!
Memo to Pat and Daniel: This week is National Brotherhood Week. Remember, be kind to those who aren't as good as you.
Email Post
Labels: assholes religious tolerance and intolerance snarky posts

Anonymous said…
Don't forget to add Stephen Baldwin to the list of poor, poor pitiful evangelicals. Just ask Florida hardware store owner Lyn Fletcher: he'll tell you that, since his conversion to Christianity, everybody's been picking on poor little Stevie. And now that he's suffered a very public bankruptcy, his "persecution" has only intensified.

That, in Fletcher's mind, makes Baldwin a modern-day Job. And he's enjoining evangelicals to financially "restore" him.

Hilde said…
The winner's Muslim background combined with the runner up's support of the Arizona immigration law, have made people over at Fox News really start seeing a conspiracy against white, conservative, Protestant America.

I saw the pageant crowning over and over again at my gym, which runs Fox News all day every day, and I wondered how long it would take from someone to declare the end of America as we know it. Michael Barkun is so right about how conspiracy theory functions.

Paul Harvey said…
Kelly: It gets worse. Apparently Miss Oklahoma was discriminated against because she is a "strong believer in states' rights," like the rights of Arizona to discriminate against its Latino populace.
May 17, 2010 at 5:18 PM

"In perhaps a repeat of last year’s contest, Woolard lost the crown after answering a controversial question that may be unpopular with some, but reflects the opinion of the majority of Americans."

(And then they add - for some reason -: "Fakih, an Arab-American from Dearborn, Michican took home the crown, despite nearly tripping on her evening gown.")

Kelly J. Baker said…
Hilde and Paul, thanks for passing that along. I had noticed something about poor Miss Oklahoma, but I didn't realize the connection. Who knew that we could see the protest of white Protestant America in beauty pageants? I also thought it was interesting that when Oscar Nunez from _The Office_ asked the question he was booed by the audience.
May 18, 2010 at 9:02 AM