Blogging's a little light on my end as I limp to the end of the semester, but in the meantime a little weekend roundup for you.

First, we have blogged here before about Jared Farmer's award-winning On Zion's Mount: Mormons, Indians, and the American Landscape. The author appears, in interview format, in Religion Dispatches, where he reflects further on his work. My favorite takeaway line: "There's no such thing as an innocent landscape." Take that, Frederick Jackson Turner.
Second, in today's NY Times, Mark Oppenheimer calls attention to a new journal, The Jewish Review of Books, which he compares to the New York Review of Books "but more Jewish, and intentionally so." The back page features a cartoon from Harvey Pekar (subject of the terrific film American Splendor), which reflects on R. Crumb's recent cartoon version of Genesis. Oppenheimer is himself a contributor to Books and Culture (make sure to check out its recently revamped website and podcasts), another analogue to the new Jewish Review.

Finally, our contributor Jon Pahl's new book is out: Empire of Sacrifice: The Religious Origins of American Violence. Somehow I doubt Jon's book will get much airtime on Fox News anytime soon, but it should get due attention elsewhere for the sheer range of subjects it covers, and its provocative thesis. I'll be dipping into this book soon and will blog more then, but in the meantime here's a little synopsis from Publisher's Weekly: 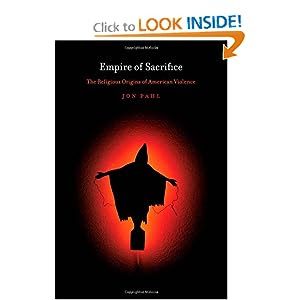 In this scholarly but generally readable monograph, Lutheran Theological Seminary professor Pahl traces the confluence of violence and religion in the United States. He argues with scholars who situate religious violence largely outside of American borders, claiming instead that it is a recurrent feature in the formation and development of the United States. Pahl emphasizes the ways in which, throughout U.S. history, the notion of sacrifice has rendered killing justifiable and even holy. Building on the work of theorists like René Girard and Mark Juergensmeyer, Pahl lays out four historical case studies—about youth, race, gender, and capital punishment—to develop his theory: Americans have found ways to consider blessed some rather brutal attitudes and behaviors... in patterns that are identifiably religious. His examination, in the epilogue, of the fusion of Christian symbols with military domination in the war on terror, while no longer a unique idea, is more extended and nuanced than most. Particularly helpful is Pahl's term innocent domination, describing a cultural attitude that champions violent systems while remaining convinced of its own virtuous intent.
Email Post
Labels: american judaism new books religion and popular culture religion and the environment religion and violence religion in the american west

January said…
I look forward to reading more about this book. I ask that, as you read it and report on it, you keep in mind the distinction between religion as it intends itself and religion used to justify behavior that religion itself condemns. That is to say, the fact that an individual or a local group attempts to put lipstick on their pig still leaves us with the pig.

Religion advocates self-sacrifice. Human sacrifice has been condemned since the story of Abraham and Isaac, although we still permit the death penalty. I trust the author keeps that distinction clear also.
April 25, 2010 at 8:39 AM