In fall 2010 PBS will broadcast what looks to be an epic 6-part historical documentary on the American religious experience. Called God in America the program will 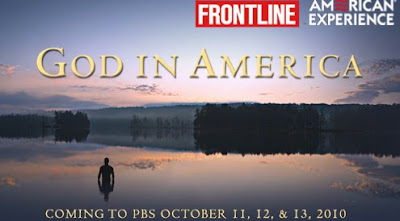 Best of all for cash-strapped libraries, church-mouse poor scholars, and pockets-turned-inside-out departments, the full 6 hours will be available on-line.

The creators summarize the project as follows:

How has religious belief shaped American history? What role have religious ideas and spiritual experience played in shaping the social, political, and cultural life of what has become the world's most religiously diverse nation?

For the first time on television, God in America, a presentation of American Experience and FRONTLINE, will explore the historical role of religion in the public life of the United States. The six-hour series, which interweaves documentary footage, historical dramatization, and interviews with religious historians, will air over three consecutive nights on PBS beginning Oct. 11, 2010. >>>
Email Post
Labels: documentaries religion and documentary films religion and television teaching resources

Luke Harlow said…
Thanks for the heads up, Randall. This looks great. I'm pretty much a fan of anything done by American Experience or Frontline.
April 22, 2010 at 9:56 AM

Our Founding Truth said…
Something tells me PBS will portray the outlier Thomas Jefferson as speaking for the Founding Fathers. A foolish, yet smart play.
April 22, 2010 at 2:01 PM

January said…
"...the historical role of religion in the public life..."? Pardon my cynicism, but the last thing we need is more headline religion.

Journalism gave us the last 30 years of the conservative religious revival as if it were all that was happening. Mega churches are easy to photograph. Demagoguery is easy to interview. Sound bites, rallies, big money and swooning evangelists are full of drama. So all we heard is what can be measured in quantities.

The influence, as a consequence of media laziness or incompetence, has been flash in the pan—except for the assassinations of abortion doctors and liberal church members. And those are quickly forgotten.

I shall be truly surprised if even FRONTLINE and The American Experience give us anything but religion as entertainment. That's all we ever get about religion, even from PBS.

If they cannot cover the destruction of the American economy over the last 30 years, what makes them think they can cover religion? (PS. Note the historical convergence of media dallying and the collapsed economy.)
April 22, 2010 at 5:16 PM