Allan Sears, president of the Alliance Defense Fund, worries that a US District Judge could be putting another nail in the Christian America coffin. In the face of legal threats to the National Day of 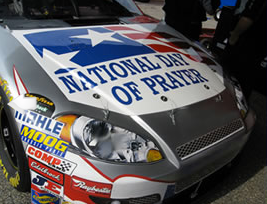 Prayer, Sears calls for support. (Is there a Nationalists' Day of Prayer?) "We must see victory on the appeal," Sears writes, "and if necessary this case must go to the U.S. Supreme Court and we must see the court uphold America's history and heritage."

Frank James blogs on the dust up over at NPR: "Add National Prayer Day Ruling to Reading List," April 16, 2010.

Because her legal opinion is likely to be a subject of discussion for a while, it's well worth taking some time to read U.S. District Judge Barbara Crabb's controversial decision Thursday that holds that it is unconstitutional for the president to proclaim, under Congress' direction, a National Day of Prayer. . . .

Her decision also provides anyone who's interested a useful history of how the National Day of Prayer came to be. A member of Congress with the good, appropriately Old Testament name of Absalom Robertson introduced the legislation in 1952, explaining in part a national day of prayer would be a good bulwark against those godless communists. >>>
Email Post
Labels: christian america civil religion prayer randall's posts religious conservatism

Anonymous said…
Professor Stephens, could you tell me which of the documents you cite support your headline that National Day of Prayer Supporters fear dark, prayerless days to come? Your headline comes across as mocking hyperbole. It is your right to disagree with the arguments and positions of the NDP supporters. A great conversation could be had about the merits of the judge's decision. But don't you have an obligation to represent the reactions of NDP supporters accurately?
April 16, 2010 at 4:56 PM

Randall said…
Seriously, though, anonymous, I agree with US District Judge Crabb on this important point:

The National Day of Prayer "goes beyond mere 'acknowledgment' of religion because its sole purpose is to encourage all citizens to engage in prayer, an inherently religious exercise that serves no secular function in this context."

Also, this, from the NDP website, strikes me as a sort of dark-cloud prophecy:

"This is an attack upon our religious freedoms and it is a sad day in America when an atheist in Wisconsin can undermine this tradition for millions of others who simply wish to join their fellow citizens in praying for their country."

"The decision undermines the values of religious freedom that America was founded upon. What's next? Declaring the federal holiday for Christmas unconstitutional?"

Alex B said…
This issue reminds me once again just how polarized our country is. One side thinks the religious right is about to impose a theocracy, while the other thinks that the gov't is about to banish religion from society. We all really need to calm down.

I do think the judge's opinion in this case is construed too narrowly. Is an NDP actually establishing or endorsing religion? Do non-religious people really feel they're second-class citizens because there's an NDP? Presidential and congressional calls to prayer are a long part of our history. Congress still opens with prayer, does it not? What's the big deal? Does our national motto "In God We Trust" go beyond mere acknowledgement of religion by encouraging the citizenry to trust in God? It's one thing to desire that non-religious people are not unduly burdened by civil religion, but it's quite another to be so ardent in trying to undo civil religion's harmless and accepted place in our nation's history.

I'm one who's not all that impressed with civil religion, but I don't think the intense drive to stamp it out completely makes a whole lot of sense to most Americans. There are plenty of examples of both sides being the aggressors in culture war. In this particular case, however, I respectfully disagree with you, Randall, about which side is the main offender.
April 17, 2010 at 5:35 PM

I don't think that there is any denying, though, that ardent supporters of the NDP are, typically, evangelical or fundamentalist Christians. Not sure that too many agnostics, mainliners, or Catholics were gathering around flagpoles when I was in high school. It's a specific kind of religion promoted, which, I think is pretty unmistakable. To pretend otherwise is to miss something glaring. Read the writings of NDP advocates.

See this 2008 piece by Ingrid Schlueter. (She was angry that Ravi Zacharias "refused" to include the name of Jesus in an NDP prayer.) I can't help but think that this is a common sentiment:

"If evangelical leaders want God's help in the midst of America's deepening national crisis, we must come to Him on His stated terms, not ours. Either God's Word is truth, or it is not. There is no middle ground. There are no special interfaith prayer models in Scripture for evangelical activists hoping to maintain conservative political coalitions. Such tacit denial of Jesus Christ will court God's righteous wrath, not His blessing."

Matt Hedstrom said…
The comparison with the tradition in Congress of opening with prayer is telling. Like the National Day of Prayer, both traditions masquerade as a kind of benign, even neutered, civil religion, when in fact they are very clearly Protestant Christian in origin, practice, and intent. Law professor Jay Wexler of Boston University, in his book Holy Hullabaloos, has a fine chapter on prayer in Congress. He expected it to be an empty ritual -- which would have been fine on establishment clause grounds -- and discovered in the course of his research that it was actually a rather pious, Protestant Christian enterprise for many members and staffers.

The promotion of civil religion by the government, according to all but the strictest separationists, is OK; the promotion of real religion is not, and the National Day of Prayer and the prayers in Congress are expressions and ritualizations of Protestant Christianity.
April 18, 2010 at 10:00 AM