Christian Militias, White Supremacists, and Scholars Who Study Them 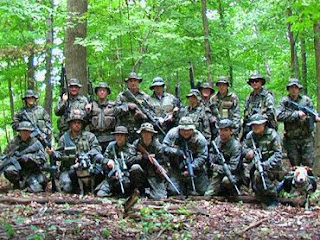 Kelly Baker
I know that many of you who know me well for just waiting for me to comment on the Hutaree, the Michigan Christian militia group, the nine arrests, and the larger white supremacist plot to reclaim America. What might be more surprising is that I sort of don't want to. What?, you say, How could a girl who works on the 1920s Klan, religious intolerance, and the hate movement not want to talk about this? What have you done with the real Kelly Baker? Is she locked up somewhere? Has her course load gone to her head?
No, I think I might be suffering from white supremacist fatigue. For the past two weeks in my Religious Intolerance class, we have been discussing terrorism (more later, I pinky swear), domestic terror and (surprise) white supremacy's relation to religious intolerance. We examined the SPLC's new report that caused much news fervor. We looked at the racial slurs flung at members of Congress about health care reform. Menacing phone calls, faxed nooses and scary racist slurs became topics of interest. This week before the Hutaree story broke (or before I knew it broke anyway), we covered the World Church of the Creator and Christian Identity. We've debated fantastic and terrifying racial theologies, yearnings for a racial apocalypse, the weird insistence that Obama is the anti-Christ. This is the part of the semester, in which I start to feel guilty about the focus on white supremacy and domestic terrorism. This is, generally, because students aren't aware of Christian militias, The Turner Diaries, and the promotion of racial separation and longing for a return to white America. This semester, however, my students are hyperaware because of recent events and their frequency in the news cycle. We, ny students and I, have covered this topic in length, and I am terribly unsettled.
In all fairness, my students could be unsettled too, but my discontent comes the realization of something that has always lingered in the back of mind when I decided to study groups like this: Despite how fantastic and racist these worldviews are, people believe in them and act upon these ideologies. Many of you might be saying, "Well, duh." But, there is a keen difference in knowing this intellectually and watching these sorts of things happen in real time. I recite these words like a mantra to my students, to public audiences and to my peers to showcase how important work on groups like the Hutaree is, but there is often a disconnect between my study and actual events. Part of this is from the obvious, my work now centers on the 1920s Klan, whose members are long gone or aged and the structured movement no longer exists. Sure, there have been more recent incarnations of the Klan but they aren't central to my more historical case study. The disconnect has allowed me to write on the 1920s Klan in depth and to showcase how common prejudices and positions that the order held dear were. The recent upsurge in coverage on the contemporary movement gives me the opportunity to showcase how my historical work is important to our particular moment, but it also gives me pause. Part of me wants to retreat into my historical work and ignore the Hutaree altogether.
The other part of me wants to proclaim how these movements are similar to the 1920s Klan and how these movements feared the loss of white dominance in America. The Hutaree don't present a complete picture of our nation in this moment but they do signal the growth of white desperation about the direction of our nation (Chip Berlet catalogues Hutaree's beliefs at Religion Dispatches). For this particular movement, America has lost her religiosity and her racial hue, and this Christian militia also continues a long tradition of Hofstader's "paranoid style"in American culture. Their positions aren't new, but they are important to understanding why certain segments of white America finds these ideas appealing. It, of course, is about more than loss of dominance, frustration or anxiety. It is also about the soul of America, the religiosity of Americans, and America's role in a global affairs. The Hutaree tells us something how Americans envision our nation and the place of religion and race in that vision. Somebody has to study these groups, even if we (myself included) sometimes might not want to.
Email Post
Labels: baker's posts religion and civic life religion and race religious intolerance white supremacy

Wayne Ratzlaff said…
Kelly,
As a note of interest, I came across a bibliographical citation a week or two ago of an article written by Joel Carpenter a few decades ago on Klan activity in Adrian, Michigan.

When the Hutaree became headline news this past weekend, I became intrigued by the geographical locality of this group.

Coincidence? Perhaps. But it might be worthwhile to get hold of Carpenter's article to investigate a possible connection.
April 1, 2010 at 2:18 PM

Hilde said…
Have you read Berlet's report Toxic to Democracy? Haven't gotten around to read it all yet, but it looks pretty interesting. See:

Chipster said…
Apparently I was insufficiently dire in my depressing predictions.
April 1, 2010 at 3:41 PM

Kelly J. Baker said…
Wayne and Hilde, thanks for the citations. I will definitely look into both of those avenues!

And Chip, I assume you are using sarcasm, and I think your predictions were dire enough and very important. I am also glad you took the time to read my piece. As you can see, I am trying to come to grips with these groups but it is more than depressing. Thus, I am trying to wade through the modern white supremacist world view, and it is quite stark and brutal compared to my historical research. This doesn't make it less important at all, but it makes it harder for me in an emotional context.
April 7, 2010 at 5:36 AM