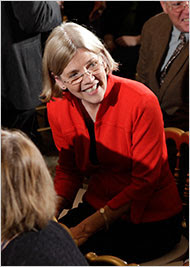 Ask Elizabeth Warren, scourge of Wall Street bankers, how they treat consumers, and she will shake her head with indignation. She will talk about morality, about fairness, about what she calls their “let them eat cake” attitude toward taxpayers. If she is riled enough, she might even spit out the Warren version of an expletive.

“Dang gummit, somebody has got to stand up on behalf of middle-class families!” she exclaimed in a recent interview in her office here.

Yes, it’s true, I haven’t spent a lot of time thinking about Methodists lately. Sure, I farmed out John Wigger’s new biography of Francis Asbury out to a couple of our blog contributors, and recently I was surveying a manuscript of a journal article which discussed the red-baiting spewed at some Methodist Church leaders in the 1950s (one of whom responded with admirable humor and restraint, I thought). But Methodists seem so, umm . . , nineteenth century somehow -- that was the Methodist century, after all. Even my several weeks at the Methodist archives at Drew University were spent in the service of a larger project that had less to do with Methodism per se than religion and civil rights more generally. Methodists just aren't that cool.

All this struck me today while reading about one of my contemporary heroes -- Elizabeth Warren, a Methodist Sunday school teacher, professor of law at Harvard Law School, congressional overseer for the TARP program, and the best-known advocate for the proposed Consumer Financial Protection Agency (opposed unanimously by Senate Republicans -- thanks, guys, plus Olympia Snowe and what’s-her-name from Maine, for your heartwarming diplay of bipartisan spirit on a major national issue). The Senator from my home state, Tom Coburn of Oklahoma, is apparently too busy fulminating about denying Viagra to sex offenders to worry about a consumer financial watchdog agency. I mean, why spend time worrying about the national housing crash, predatory lenders, pay-day loan scams, and the entire structure of too-big-to-fail “insurance” companies (yeah I’m talking about you, AIG) when there is the slightest possibility that some dude somewhere might snooker his physician into getting him some Viagra. And of course the other congressional wingnuts have been preoccupied egging on the very same Tea Party protesters who hurled racial and homophobic insults at John Lewis and Barney Frank, and are now targeting Rep. Betsy Markey in my current home state of Colorado -- check Sarah Palin's Facebook page, and you'll see that I mean the term "targeting" quite literally. There's a bullseye on you, Betsy, that will make you regret voting for a very modest, limited expansion of health care to some uninsured people. 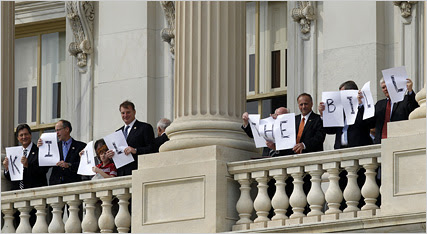 Apropos of that, I believe it is Warren that I first heard point out that medical costs were the number one cause of bankruptcy in America -- reasonably common knowledge now, not so much a few years ago when I saw her explain that.

A brief description of Professor Warren:

She is an Oklahoma native, a janitor’s daughter, a bankruptcy expert at Harvard Law School and a former Sunday School teacher who cites John Wesley — the co-founder of Methodism and a public health crusader — as an inspiration.

I’ve heard Ms. Warren on the radio, and seen her on television a number of times, and she seems equally at ease on both Jon Stewart and on Dave Ramsey -- the latter being the current reigning guru of radio financial advice. (Confusingly, Ramsey mixes sound financial advice and common-sense platitudes about staying out of debt with near-daily nonsensical screeds against Social Security and in favor of the kinds of market fundamentalism which have, in part, created the legions of people calling into his shows seeking emergency financial advice). Warren seems equally able to piss off the right-wingnuts and Timothy Geithner at the same time, an unusual quality right now.

In her pitch for a consumer financial protection agency, she speaks forthrightly to Congress, fear of failure be damned:

If that happens, Ms. Warren will still have her own platform, starting with her nearly constant stream of television appearances. Hosts and cameramen love her: she has the friendly face of a teacher, the pedigree of a top law professor, the moral force of a preacher and the plain-spoken twang of an Oklahoman.

Historically, Methodists have been pretty resistant to fundamentalism, and perhaps that helps explain why Warren, an old-fashioned and principled conservative in many ways, has emerged as the strongest proponent of consumer protections against free market fundamentalism.