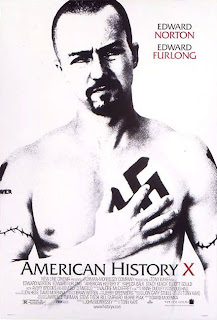 In my Religious Intolerance class yesterday, one of my wicked smart students (this class is full of sophisticated, clever students, which makes me very lucky) made the fateful mistake of asking me what I thought about American History X, the 1998 film about white supremacy and what happens when you try to leave hate behind. He, of course, didn't know that he tapped into one of my soapbox issues: popular representations of intolerant peoples (in this instance white supremacists).

This issue, which I have blogged about before, consumes me when I should be thinking about much more important things (like 1920s Klansmen and Klanswomen). My Intolerance class this semester, thus, revolves around popular culture and the media's representation of intolerance, but the more I teach about this, the more I am interested not only how the victims of intolerance are portrayed but also those who are considered "intolerant." American History X's portrayal of white supremacists, particularly Neo-Nazis, strikes me as both stereotypical and novel. The Neo-Nazis, of course, read Mein Kampf, sport shaved heads, and ink their skin with white supremacist symbols and swastikas. They are dysfunctional, violent, backward, and uneducated (except the leader). They are members of a prison gang, and they hate African Americans as well as Jewish people. (More often than not, they are also Southern.) This is standard fare. Almost all television portrayals of white supremacists render them as burly, uneducated dudes whose looming physical presence should signal their racist agendas. See, the film says, we can easily identify the bad guys, and these types of guys are always the bad guys.

Joshua Alston at Newsweek points out the popularity of "primetime supremacy" or white supremacy on television. Alston writes:

Maybe it's just my naiveté, but having lived in cities large and small, both north and south of the Mason-Dixon, I can't recall ever having seen a skinhead wash his car, or eat an ice-cream cone, or even glower from a dusky corner.... According to the Southern Poverty Law Center, membership in white-extremist groups is ticking upward, as downtrodden, angry Caucasians seek an outlet for their anxieties about a black president, illegal immigration, and a leaky economy. Still, the supremacy surge seems to be much more acute in Hollywood than anywhere else in the country.

Hollywood, it seems, has caught the supremacist bug. Popular television shows document your local skinhead menacing someone about something while these groups gain ground in our nation. Moreover, Alston thinks that these characters prove popular because Americans like to distance ourselves from "occupational racists" and then we don't have to address racism: if racism looks like this, then we are clearly not racist. He continues:

The reason the card-carrying white supremacist lingers in the public imagination is not just because he's scary, but because he fortifies our self-regard in an area where we all occasionally need some convincing. As the puppet of Avenue Q sang on Broadway, "everyone's a little bit racist." On some level we all recognize this, and to acknowledge—or even inflate—white supremacists is to assuage our guilt with the knowledge that there are people out there far more prejudiced than most of us could ever be. For writers, these characters have even more appeal. Their beliefs are so stigmatized, there's no need to bog down the story with motives and expository monologues. As Henry Rollins said of his skinhead [Sons of] Anarchy character, "I'm [playing] a white supremacist—I have no redeeming qualities whatsoever besides that I like my kids." Apparently there's some redeeming quality, or bald white actors wouldn't be getting so much work.

Redemption is fascinating language to use in this context because I disagree a bit with Alston's analysis. These characters because they are easy. We can clearly identify their moral wrongness and vituperative hate. The problem with the stereotypical presentation of white supremacists or intolerant peoples is that ignores the reality of modern white supremacist movements. These movements organize under the banner of religion, race, and common prejudice but they aren't as easily identifiable as television or film would like us to believe. These movements are not backward but savvy in both cultural and technological circles. Yes, there are members of these movements who might have resonance with their portrayal on TV, but many of the members are educated, non-tattooed (or at least covered), articulate and highly motivated. Movements like these contain David Duke as well as those who we expect to cling to base prejudices. On celluloid, the characters are not redeeming at all, but in everyday interactions, they are more likely to seem so. If only those who believed in the bizarre racial worlds of white supremacists were as easily identifiable as their movie counterparts, then it might be easier to discount the fantastic nature of their beliefs and practices. They look strange, the film says, they must be strange. Our everyday encounters with people that hold these beliefs are not so forward or obvious. By rendering the intolerant as obvious, film and television lulls us into believing that we can easily identify those with unseemly, clearly racist agendas. It is, however, not so easy. 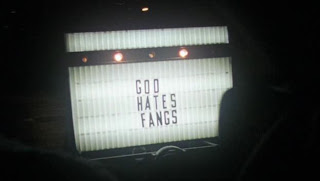 As someone who studies the religious worlds of hate movements, the disconnect between white supremacy and religion in popular culture is even more disturbing. Scary white dudes make more sense visually than engagement with systems of belief. Moreover, religiously intolerant people are also represented as frothing from the mouth crazy instead of the more subtle forms of religious intolerance. For instance, HBO's vampire drama True Blood renders the Fellowship of the Sun (FOTS), the vampire hating and hunting church, as religiously quacky and dangerous. They spout salvation and collect weapons. The well-meaning but intellectually lacking Jason Stackhouse, the central character Sookie Stackhouse's brother, is wooed by the leaders of FOTS and lured into their rhetoric of danger of vampires despite his personal experience otherwise. FOTS members are young, evangelical, wholesome, and eventually violent and unyielding. They plan attacks to murder vampires while wearing camp t-shirts and good suits. They are intolerant, and it becomes obvious as they become kookier and kookier. Their religious theology is thin, but their hate is apparent. Again, the stereotypes focus on uneducated folks, but these members of the Fellowship are more well-meaning but confused than primetime supremacists. They are still fringe and small, like we hope all intolerant communities are. Alston calls this "hate's new look" but it is just the same old stock characters. 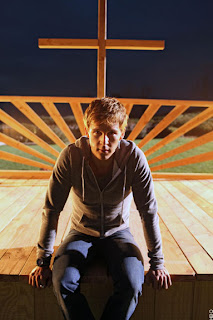 American History X, then, proves to be novel and unique in Edward Norton's transformation from white supremacist to a reformed man. He abandons the racist world view yet he is still bound by the tattoos on his skin. Every time he looks in the mirror, he confronts the swastika on his chest. His previous identity scars his skin and his past. Moving beyond hate proves to be hard to do. This is part of the brilliance of the film, handling the aftermath of supremacy and chains of violence attached to this world view. The portrayal of intolerant peoples on film and tv, however, generally stick to stock figures but Norton's character tries for redemption and doesn't necessarily succeed. Redemption is not necessarily the correct language about celluloid portrayals of intolerance. To engage the complexity of intolerance might prove too difficult for television or film, and audiences might not be receptive to the bad guys looking more like the rest of us. 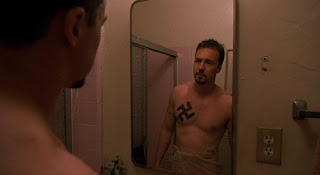