The View from Pachgatgoch (or, Why Moravians are Still Sexy)

Moravians are about as exotic as early American history can ever hope to be. And, seemingly, I cannot stop writing about them. Officially, they are not part of my research agenda, but books about them mysteriously appear on my shelves, squeeze their way onto my course reading lists, and land in my mailbox for possible review. This past January, once again, I found myself immersed in the world of early American Moravians as I picked my way through the 1300 hundred pages that comprise one of the most recent publications related to Moravians in early America: an enormous two-volume translation of the German diaries of the Moravian mission in Pachgatgoch, Connecticut, translated and edited by husband and wife team William A. Starna and Corinna Dally-Starna, titled, Gideon’s People: Being a Chronicle of an American Indian Community in Colonial Connecticut and the Moravian Missionaries Who Served There (2009). The diaries span from 1747 through 1763, even though the mission officially started in 1743 and was maintained on and off until 1770. My official evaluation of the volumes will be forthcoming in the New England Quarterly later this year, but the diaries themselves prompted more reflection that I could possibly fit into a book review, so I thought I’d share some of the overflow here. 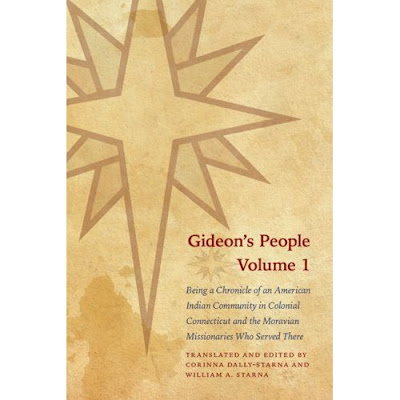 First and foremost, reading through these diaries reminded me of the surprising religious and ethnic diversity of western Connecticut. Pachgatgoch was in many ways at the crossroads of empire and a place of multiple, overlapping religious regions and ethnicities. Runaway Africans and Indians along with Indian preachers from other parts of the colony drift in and out of Pachgatgoch. EuroAmericans (mostly English and Dutch), likewise, surface in the diaries as inquisitive visitors: Presbyterians, Anglicans, New Lights, Old Lights, Baptists, Separates, Quakers, seekers, and even the occasional Jew or two come to figure out the Moravians and—at times, even try to join them. Peering into the Pachgatgoch records is almost like peeking behind the curtain at a show or performance, or into the basement or attic of a host's house: you find some unexpected things that belie the official presentation. Whatever we might take to be the “center” of religious history in the colonies, these records serve as a warning against privileging too much the urban coastal centers.

Thirdly, in reading these records, I was reminded of the politicized nature of Indian evangelism at the edges of empire. Not only were the Moravian missionaries arrested and placed on trial in Milford, Connecticut, in 1743 under deep suspicion of being Catholic spies trying to woo local Indians into a military alliance against New England Protestants, but they were subsequently banned from Connecticut for a full six years. Even after they returned, rumors circulated for the next decade that they were supplying the French with powder and shot. (I grappled with some of these issues in an NEQ essay from Sept. 2009.) Over time local colonists grew to accept the Moravians more and more, and even the minister of nearby Kent, Connecticut, cannot seem to forgive himself for not defending the Moravians when they were placed on trial (his excuse was that he had been temporarily swayed against the Moravians by Gilbert Tennent’s 1743 anti-Moravian tract, Some Account of the Principles of the Moravians).

Fourthly, I’ll admit to receiving new insight into the way that drunkenness actually functioned in Native communities. Everyone knows that the drunken Indian quickly became a colonial Indian stereotype; less often discussed are the ways in which drunken men (usually) not only offended EuroAmerican religious sensibilities but also brought tangible fear and physical danger to Indian families and communities. According to the Moravians, at least, drunken Indian men routinely got abusive enough that women and children fled into the woods overnight or to the Moravians’ houses to escape the violent outrages of their husbands, brothers, and sons. In short, drunkenness was a very real social threat for Indians themselves in this period; it was not just something missionaries denounced in fits of cultural arrogance. I knew this, of course, but somehow these records made this more tangible.

Fifthly, the centrality of free and unfree labor for Indians and Africans alike in this period cannot be overstated. My suspicions that debt and labor profoundly shaped much of Indian-African-colonist relations were confirmed by the stories in these volumes. Just one example of this was a colonist who was owed money by a Moravian Indian, marched into Pachgatgoch and, when he couldn’t find the Indian who owed him money, instead randomly kidnapped two Indian children and sold them for profit as servants/slaves.

Sixthly, and lastly, these records confirm, once again, the difficulty of any single group in bringing about the desired religious and cultural transformation in Indian communities. The last few years of the diaries drip with a familiar declension narrative in which the drinking, sexual promiscuity, and religious indifference of Natives spins out of control. The harder the Moravians try to reform specific cultural habits (not clothing Native children, for example), the less the Pachgatgoch respond. The curious thing is, of course, that many Pachgatgoch do continue as Moravian Indian Christians well past the official closing of the mission. Some move to Pennsylvania and some remain in New York and/or Connecticut, but the perceived failure of the Moravians does not always translate into a total abandonment of Christianity by the Pachgatgoch.

In short, the Moravians are still sexy for a reason. These volumes are well worth the hefty price you pay either by purchasing them or lugging them home from the library (plus, you’ll look cool and cutting-edge carrying anything with “Moravian” in the title). The issues raised are numerous and enlightening, and for that we owe Starna and Dally-Starna a big thanks.