When Jerry Falwell issued his call to arms Listen America! in 1980, he intended to rally the troops. Or to use another metaphor, them dry bones needed reanimatin'. Falwell's words 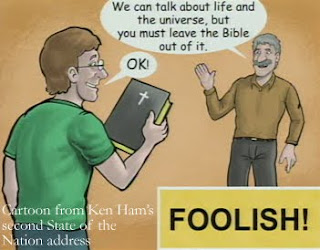 leapt from the page like shouts from a megaphone. "Listen, America! Our nation is on a perilous path in regard to her political, economic, and military positions."

I'm not sure if Ken Ham is taking cues from Lynchburg's fallen saint. Could be. Ham--from the creationist Answers in Genesis fame and director of the sprawling, high tech Creation Museum--is not happy with how things are going in his adopted country. (He's is originally from Australia. I guess that chinstrap beards are popular down under. Though it seems like a hardcore, new metal, Amish thing up here.) As Ham watches America being reduced to moral rubble, there's much to shake a fist at.

In Ham's version of contemporary history, the nation is in need of a swift Jeremiad-kick to the hind quarters. He targets agents of atheism, milquetoast theism, and wild-eyed secularism lurking around every corner in his second State of the Nation address. (See video here. The embedded version seemed to slow things down here.) He is particularly tough on President Obama, who had the audacity to hope that America was more than just a Christian nation. When Obama proclaims: "Whatever we once were, we are no longer a Christian nation—at least not just. We are also a Jewish nation, a Muslim nation, a Buddhist nation and a Hindu nation and a nation of nonbelievers," it rings loud alarm bells for Ham and Christian-nation amateur historians like David Barton and Peter Marshall.

Ham's address is interesting on a number of levels. (He takes my colleague and coauthor Karl Giberson to task at around 36:20.) I'm struck by the way that Ham, like millions of other fundamentalists now and from ages past, does not believe in hermeneutics. The Bible is so clear and direct--a one-stop shop for all life's problems--that there is almost no need for interpretation. According to the Heritage Singers, "God said it, and I believe it." Or, as I heard a seminary professor put it some years ago, fundamentalists take their miracles and their passages of scripture straight, no chaser. From a whirlwind of scripture passages emerges a few other themes. A thread of declension runs throughout, depicted well in the helpful cartoons. One major point (surprise) has to do with the fact that evolution is not a science. Another theme: America is slipping from the grasp of true believers. Quislings, meek Christians, have sold out.

Observers can find out a lot about a movement by looking at what it vilifies, damns, or fights. Billy Sunday was no fan of higher criticism and, by extension, Germans. Another Billy, Graham, fought tooth and nail against sin and commies in the late 1940s. Bob Jones, III, battled the feds, who wanted to strip BJU of its tax exempt status. One could go on and on.

I'm still asking the "why" questions about all of this. Why have fundamentalists, and many evangelicals, arrayed themselves against a host of enemies? What's the nature of that embattled feeling? . . . Help me, Matt Sutton!
Email Post
Labels: christian nation creationism declension fundamentalism jeremiads randall's posts

Paul Harvey said…
R -- very disappointed that Ham teed off on Karl but missed you entirely; maybe you'll appear in the sequel. Who is it that is in the audience, is what I wonder, especially since he tees off on Nazarenes and Southern Baptists. If you're going to demonize people from those traditions, gotta wonder who's left for your side. And the Southwestern minister he mentions, Dembski, is an ID proponent -- that's not good enough for Ham, I gather? Amazing.
February 21, 2010 at 6:39 PM

Randall said…
The Dembski thing is really amazing. Here's a guy who has been, rightfully, raked over the coals for trying to find the hand of God in science and who left Baylor after the big dust up. He's not even on Ham's team? What? Ham's been reading _How to Lose Friends and Alienate People_.

Makes one think that Ham, like LaHaye, would even find fault with Billy Graham. "Rev. Graham is just not angry enough."

Those profs, and alums, from Oklahoma Baptist University are waaaay too LIBERAL!
February 21, 2010 at 8:41 PM

Rebecca said…
Wow Randall! Ken Ham is taking you ON!