Why is the South So Religious?

The editors of the Science & Religion Today blog asked me to answer that question. One could come at that from any number of angles. So, here's my 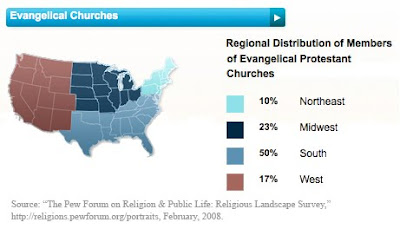 Flannery O’Connor wrote about the Christ-haunted South. The buckle of the Bible Belt. The heart of the heart of God’s country. She could not throw her pen in the air in Dixie without it landing on some wild, fascinating tale of Jesus maniacs, tortured believers, crippled visionaries, or teeth-gnashing atheists: “Whenever I’m asked why Southern writers particularly have a penchant for writing about freaks, I say it is because we are still able to recognize one.” It also helped that her town of Milledgeville, Georgia, was home to the state insane asylum and a smattering of hot-Protestant sectarians.

O’Connor wrote beautifully about something that was so obvious as to be nearly mundane: The South is the most religious region in the United Sates. The Southern Baptist Convention, the nation’s largest denomination, claims roughly 16 million adherents. The Pew Forum on Religion & Public Life reports that “more than eight in ten people in Mississippi (82 percent) say religion is very important in their lives, making the Magnolia State the most religious according to this measure.” Fewer than four in ten of those polled in Vermont, harvesting their organic crops or brewing their organic-certified beer, claimed religion was important in their lives. read on >>>
Email Post
Labels: Flannery O'Connor randall's posts regional religious traditions religious statistics southern religion

Beema Noel said…
And what does it mean to be religious; to be Christian?

"Jesus insisted that we love one another as He loves each one of us. Jesus gave His life to love us and He tells us that we also have to give whatever it takes to do good to one another." - Mother Teresa

"A truly religious people are blessed with constructive solutions to every problem". - Me
January 28, 2010 at 5:39 PM

Randall said…
I've never see someone quote themselves like that before. Awesome. Takes an amazing sense of self and of one's enormous importance to do so.