Mark Twain was fond of the sharp barb, the straight shot, the cutting colloquial witticism, the carefully turned phrase. He liked to contrast trim American prose with the tangle of Teutonic verbiage. Whoever invented German, he quipped in "The Awful German Language" (1880), "seems to have taken pleasure in complicating it in every way he could think of."

Twain also had strong opinions about God and organized religion. (Had his wife died earlier he might have made his views more public.) He confided to his notebook in 1904: "God, so atrocious in the Old Testament, so attractive in the New—the Jekyl and Hyde of sacred romance." 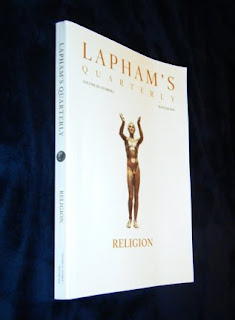 Lewis Lapham seems to follow Twain’s lead in the intro to the new Lapham’s Quarterly. The issue he says, "doesn’t trade in divine revelation, engage in theological dispute, or doubt the existence of God." True to form—besides Lapham’s own opinions laid bare in the intro—this LQ culls bits and pieces from the world’s leading religions, along with the words of saints, martyrs, remote observers, apostates, and what have you.

Brought up in a secular home, Lapham "missed the explanation as to why the stories about Moses and Jesus were to be taken as true while those about Apollo and Rumpelstiltskin were not." He brought a similar critical eye (or is it heart?) to New Haven as an undergrad in the 1950s. So while William Buckley fretted over "whether Yale fortifies or shatters the average student's respect for Christianity," Lapham wanted the grizzly details of God’s autopsy report. How and when did the deity expire? "[D]isemboweled by Machiavelli in sixteenth-century Florence, assassinated in eighteenth-century Paris by agents of the French Enlightenment, lost at sea in 1835 while on a voyage with Charles Darwin to the Galapagos Islands, garroted by Friedrich Nietzsche on a Swiss Alp in the autumn of 1882, disappeared into the nuclear cloud ascending from Hiroshima on August 6, 1945."

News of God’s demise turned out to be greatly exaggerated. Even observers in Manhattan, Cambridge, and New Haven couldn’t deny the surge in religious zeal, from Jesus People to Jihadists. Notes Lapham: "Together with the rising of militant religious fervor in the United States during the last thirty years, devout and literal-minded readings of the Qur’an have brought forth war in Iraq and Afghanistan, massacre in Africa and the Balkans, suicide bombing in Israel, Pakistan, India, and Palestine, heavy security encircling the presence of President Barack 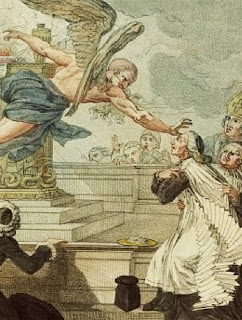 Obama, elected to the White House in his persona as a Messiah come not to govern the country but to redeem it." (Curious. I don’t quite get why Lapham broadly paints religion as a Dionysian freak show or a shell game huckstering. Snake handlers and Elmer Gantrys all.)

Purple prose of the editorial aside, this issue of LQ is tremendous. Beautiful full-color photos and paintings appear alongside selections from all manner of writers, prophets, poets, skeptics, luminaries, and lunatics. For example: Émile Zola Observes an Exorcism: c. 1870 / Brittany; Among Scorpions: 1520 / Wittenberg; The Gospel According to Jorge Luis Borges: 1928 / Argentina; Flannery O'Connor Presents a Prophet: 1949 / Tennessee; Marilynne Robinson Raises an Objection: 1997 / Iowa City; Fire and Smoke: c. 1100 / Constantinople; Church and State: 1779 / Monticello; Deification: 332 BC / Egypt; John Updike Hears a Point of Confession: 1960 / Mt. Judge. The scope well fits Lapham’s sprawling vision of arts and letters. Or, like some wag said of Greil Marcus, "everything reminds him of everything."

I can easily see how this handsome volume could be used as a text in a religion survey. There’s much of value here. The final three sections are most rewarding. The first features essays by contemporary authors on a variety of topics—original sin, church and state, and secularism. The penultimate bit, titled "Conversations," is brilliant: Søren Kierkegaard & Bertrand Russell: Define "Faith"; John Milton & Reinhold Neibuhr: In His Image; Ralph Waldo Emerson & G. K. Chesteron: What Would Jesus Do? The volume is rounded out by Terry Eagleton’s essay on Dostoevsky’s "The Grand Inquisitor."
Email Post
Labels: church and state journals randall's posts