"When the Word of God Says One Thing . . .": A Dispatch from the Scandal of the Evangelical Mind Conference

Evangelicals, wrote Mark Noll in his 1994 book The Scandal of the Evangelical Mind, had not distinguished themselves as thinkers. With souls to save, revival tents to pitch, and casseroles to bake there was 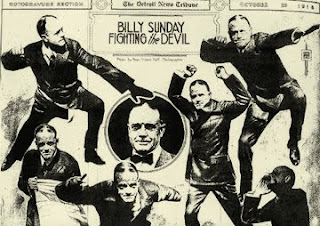 little time for philosophizing or pondering the wonders of the world.

Critics took aim at god-fearing anti-intellectualism. In typical fashion an H. L. Mencken understudy threw all dunderheaded fundamentalists onto the trash heap of history: "The neurotic, God-ecstatic, sex repressed, epileptic soul of the Puritan has always found its vent hole in the camp-meeting."

Mencken’s crew specialized in hyperbole, but they were, sorta, onto something. Revivalism’s chief apostles won over eager audiences by thrashing godless Teuton professors and consigning over-civilized eggheads to lakes of fire.

"What do I care if some little dibbly-dibbly preacher goes tibbly-tibbling around because I use plain Anglo-Saxon words? Jesus was no dough-faced, lick-spittle proposition. Jesus was the greatest scrapper that ever lived."

"When the word of God says one thing and scholarship says another, scholarship can go to hell."
It’s a short distance from Sunday’s saw-dust-trail aphorisms to Bill Gaither’s soft Victorian fideism of the 1970s.

Over 40 years ago historian Richard Hofstadter argued that Sunday (that was his real name) embodied much of what was dangerous, preposterous, and anti-intellectual about conservative Christianity. Noll’s 1994 book took some cues from Hofstadter, but Noll was far more subtle in 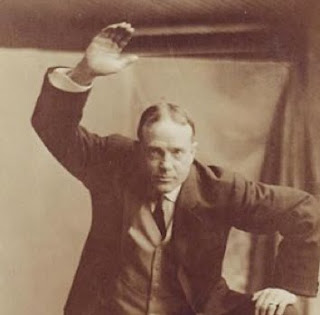 his analysis of that mindlessness. “The evangelical ethos is activist, populist, pragmatic, and utilitarian,” Noll wrote. “It allows little space for broader or deeper intellectual effort because it is dominated by the urgencies of the moment.”

Last week’s conference at Gordon College—The Scandal of the Evangelical Mind, 15 Years Later—reconsidered some of the intellectual/anti-intellectual aspects of the movement. Presenters looked at where evangelicalism has been, where it is now and discussed what we might expect of evangelical intellectual life in years to come.

The conference was a great success, due in large part to the participants and attendees as well as generous support from Eastern Nazarene College, Gordon College, and the Lilly Endowment. And, it was fun to boot. (Just my kind of religious-history-nerd fun, that is.)

Marua Jane Farrelly conducted a public interview with Noll for our first session on Thursday night. A crowd of roughly 350-375 attended. Farrelly asked a number of pointed questions on Noll’s 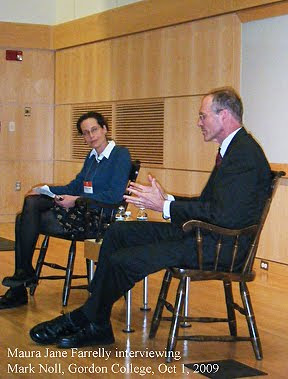 career as a historian and the intersection of faith and scholarship. Among other things, Noll commented on why he wrote the book and how it was received by a number of different communities: American and Canadian evangelicals, colleagues-at-the-time at Wheaton, and the academy overall.

The sessions on Friday were equally productive and provocative. I won’t say much about the roundtable that Karl Giberson and I did on conservative evangelical expertise on Friday morning. That might appear out of place, if not boastful, vain, and jerk-like. But, I will say that the comments of Jon Roberts and Jim Wallace were very insightful and helped us to rethink how we might conceptualize “expertise,” “authority,” and the nature of influence. After that, Noll delivered a thoughtful convocation in the Gordon chapel. He urged students, faculty, and others in attendance to embrace an intellectual calling.

In the afternoon David Hempton and Peggy Bedroth considered “Evangelicals and the Life of the Mind.” Hempton engaged a series of fascinating questions about evangelical “minds and mentalités”: “Why is it that American evangelicals are so resistant to scientific knowledge emanating from elite centers of learning? Why do many liberals and progressives have something approaching contempt for the evangelical mind, but a great deal of residual admiration for evangelical social praxis? . . . . What impact has the evangelical mind, or evangelical minds, on important public debates about the intellectual validity and social functions of religion raised by militant atheists like Richard Dawkins and Christopher Hitchens?” Bendroth followed with her 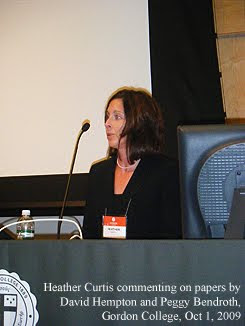 paper, “Women, Anti-Intellectualism, and Evangelical Identity.” I was intrigued by her discussion of the scope and limits of interpretation. She focused in on historiography, and the “various ways that scholars have conceptualized the relationship between women and evangelical religion over the past several decades. From some fairly humble beginnings in the late 1970s, when nobody seemed to want to talk about women and conservative religion, the conversation has become more and more theoretically sophisticated.”

The final afternoon session convened before Noll gave some concluding remarks. This last panel on “Evangelicals, Politics, and Global Engagement” mapped out the surprising political and intellectual activity of contemporary evangelicals. Dennis Hoover and James C. Wallace explored recent demographic and cultural trends with attention to the big picture. Wallace took us through some of his extensive research with Tim Shah on the emerging evangelical intelligentsia. Hoover asked: “have American evangelicals moved from being activists to internationalists?” He concluded by noting, “when we circle back to consider again the basic thesis of The Scandal of the Evangelical Mind, we should be careful not to suggest that holding a position that happens to align with militant internationalism is necessarily the result of intellectual failure, while holding a position that happens to comport with liberal internationalism is necessarily the outworking of a rigorous intellect.”

It was a special treat for me to interview Noll on the subject of history before the conference got underway. His books and articles have influenced my own research a great deal. In the Youtube clip here (in two parts) I speak to Noll about his work as an American religious historian and his view of the field as it has developed since the 1960s and 1970s. Notice that Noll gives mad props (my word, not his) to early-career scholars, like Heather Curtis, Ed Blum, Rachel Wheeler, Charles Irons, and Wallace Best.

For the future . . . I hope to host other speakers at Eastern Nazarene College who will look at how evangelicals have engaged the world of ideas in other fields. From the papers that came out of the Gordon-ENC conference—and others to follow—I ‘d like to put together an edited volume. That’s down the road apiece. In the meantime, I have revival tents to pitch and tuna-noodle casseroles to bake.
Email Post
Labels: church history conferences evangelicalism mark noll randall's posts religion in american history television

Linford Fisher said…
Thanks, Randall, for this excellent summary. Kudos on the interview, too--very well done (both production and content).
October 7, 2009 at 8:36 AM

Luke Harlow said…
Randall, great report and nice interview. Thanks much for posting this material.
October 7, 2009 at 9:48 AM

Phil said…
Excellent work, Randall. Look forward to more of RAH TV. And I'm with Paul on the tuna-noodle casseroles.
October 7, 2009 at 6:32 PM

Anonymous said…
Good one and it helps a lot.Thank you for your great post.

Manlius said…
Great post. I'm reminded of a quotation attributed to Bob Jones (not sure which one.) Speaking of evangelical scholars, he once said that their approach to academia seemed to be saying, "I'll call you a Christian if you'll call me a scholar." I'm not exactly a fan of Bob Jones, but he nailed this one pretty well.
October 8, 2009 at 8:51 AM

4/13/17 Reel 9 E
p 13 – “I will tell you what to do. Go with people bigger than you are; bigger in mind; bigger in ambition; bigger in morals. Go to college. Read good books. Go to school. Get an introduction of yourself to yourself.”

p 24 – “Ignorance is stagnation; knowledge is a river. Ignorance is a desert; knowledge is fruit. Ignorance is poverty; knowledge is plenty. Ignorance is weakness; knowledge is strength. A plant grows because it takes in the sunshine and the rain, the quality it needs to build itself up into full fruit. Now, we all know this: It is better to feed boys and girls books, schools, colleges, churches than to feed them booze and the things that wreck their lives and blight them and assassinate their characters.”

p 29 – “Do your best, boys, and you will never wear out shoeleather looking for a job. Be like a young fellow who recently entered college and he pasted a big ‘V’ over his desk. That was his inspiration – it meant ‘valedictorian.’ When he went out from there, he was the head of the bunch!”
October 8, 2009 at 9:32 PM

Randall said…
Paul M.: thanks for posting these. A good counter to the ones I had. Wonder what Sunday had to say about the particulars concerning the kind of education young men should receive. A premillennialist from the 1920s or 1930s might have been very high on education, too. But that education certainly wouldn't have looked much like the one obtained at a state school or a Yale, Harvard, or Princeton.

Not long ago I looked around for a quote that I thought was Sunday's along the lines of "I'd rather have a holy Bible than a Bible full of holes." Not sure if that is attributable to him, though.
October 9, 2009 at 9:04 AM

Paul M. said…
Sunday tried to make his appeals inoffensive to listeners from a surprisingly broad range of denominations (thus the famous, if tongue-in-cheek, "I'd like to make a good Catholic a better Catholic.") I don't recall him advocating any colleges in particular. But a young Gresham Machen heard Sunday preach at Princeton in 1915.
http://query.nytimes.com/mem/archive-free/pdf?_r=1&res=9F0DE6DA1539E333A25752C1A9659C946496D6CF

I suspect that many of Sunday's young converts attended bible institutes (Biola, Moody Bible) but I wouldn't be surprised if some of them attended elite institutions. Finding out would take some digging.

I'm sure that Sunday's idea of education content leaned more toward the vocational than the liberal arts. In my experience, Evangelical anti-intellectualism is mostly aimed at the liberalization that comes from a certain *kind* of education, not education itself. Even one of Paul's quotes lends itself toward this idea (e.g. "Ignorance is stagnation; knowledge is a river. Ignorance is a desert; knowledge is fruit. Ignorance is poverty; knowledge is plenty. Ignorance is weakness; knowledge is strength."). This imagery of rivers, fruits, plenty, and strength lends itself to obtaining an education that will make you a productive member of society. As for morals, well, you just try to maintain what you good ole' family handed down to you---weather the storm of your encounter with the life of the mind. The danger of education comes when you chance upon a questioning critical thinking and turn that method on yourself, your family, your community, your nation, and---worst of all---the Bible and received dogma.

In sum, anti-intellectualism need not take the form of being against education.

I agree with your main point, that anti-intellectualism is not necessarily hostile to education. I also think that you've picked up on something that Richard Hofstadter argued in "Anti-intellectualism in American Life." He noted that one could be well educated and even be a lawyer or doctor but not participate in the life of the mind.

The proper target of this charge might be the bourgeois conception of education as the means to an end, namely as the ticket to a good job.

Insofar as evangelicalism is a disproportionately middle class movement, I guess your criticism applies. But the root cause might be class rather than religion per se.
October 13, 2009 at 7:54 AM