Coming back from a long, dissertation-induced hiatus, I thought I’d push a book I read over the summer, Eileen Luhr's Witnessing Suburbia: Conservatives and Christian Youth Culture. From the publisher:

Witnessing Suburbia is a lively cultural analysis of the conservative shift in national politics that transformed the United States during the Reagan-Bush era. Eileen Luhr focuses on two fundamental aspects of this shift: the suburbanization of evangelicalism and the rise of Christian popular culture, especially popular music. Taking us from the Jesus Freaks of the late 1960s to Christian heavy metal music to Christian rock festivals and beyond, she shows how evangelicals succeeded in "witnessing" to America's suburbs in a consumer idiom. Luhr argues that the emergence of a politicized evangelical youth culture in fact ranks as one of the major achievements of "third wave" conservatism in the late twentieth century.

This is ground covered before by Colleen McDannell and Heather Hendershot. Yet, Luhr brings something new to the table, linking suburbanization, consumer culture, sexuality, post- 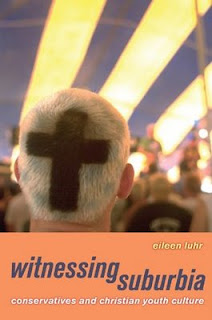 modernism, youth culture, and evangelical politics. Luhr creatively reads her evidence, ranging from fan magazines to album covers to a Christian youth concert she attended in Orange County, California. Her take on Christian heavy metal—and how it fit into the sexual politics of the 1980s—is particularly provocative and a wonderful selection for courses in American religion and popular culture. (The picture of Robert Sweet, the drummer for Stryper, posing on the cover of Kerrang! magazine, proudly sporting chest hair and a NIV Bible, is worth the sticker price alone.)

As a whole, however, the book suffers a bit from repeating its points throughout the four main chapters and from not dealing with matters of religious consumption. Luhr offers little insight into how or why certain resources—from Christian punk fanzines to radio programming—were bought and used by suburbanites or how these products added to the religious identity of suburban youth. A point hinted at throughout, namely that race had a lot to do with the construction of suburbia and something to do with suburban forms of religious understanding, also should have been fleshed out more. It’s interesting to think of, say, CCM as a hyper-white brand of rock, ready for consumption by white suburbanites. Still, this is a solid addition to the growing body of literature on conservative politics and, more importantly, points us toward thinking of conservatism as both cultural practice and political impulse.

If only the Conservative Bible Project was out when she wrote the book…
Email Post
Labels: deg's posts evangelicalism religion and popular culture religious conservatism

Hilde Løvdal said…
Luhr has written a very interesting book, indeed. I particularly liked the ways she talks about how evangelical youths defined Christian faith and conservatism as an act of rebellion in post-1960s USA. (What's more rebellious in 1980s rock than a heavy metal band singing "To Hell With the Devil?")

And, yes, the illustrations are priceless.

Steven P. Miller said…
The chapter on Christian metal took me back to the days when I was a good little culture warrior. To quote One Bad Pig: “There’s no fakin/Fry like bacon/You’re a pagan!” Or Homer Simpson: “Mmm . . . bacon.”
October 8, 2009 at 2:43 PM

Were you the man with a tat on his big fat belly that wiggled around like marmalade jelly?

. . . I believe "Jesus Saves" is what it raved in a typical tattoo green. He stood on a box in the middle of the city and claimed he had a dream.

Hilde Løvdal said…
The guys DC Talk tried to be tough, but when it comes to rebellion, Carman is the king: http://www.youtube.com/watch?v=ATOTYxs0mec

Anonymous said…
My students are quick to point out how the representation of "otherness" in "Jesus Freak" rings false, as the music, the fashions, and even the message of self-image matches exactly with that of mainstream pop culture. They talk about the song's video as an almost desperate claim of difference in the face of startling nondifference.
October 12, 2009 at 11:29 AM