Report from the conference on Ellen G. White in Portland October 23-5.
by Amanda Porterfield
Without pretending to do justice to the ambitious book that will result from this conference, here are just two of the interesting questions that arose in discussion.

Randall Stephens posed the question, how did Ellen White build a movement out of the 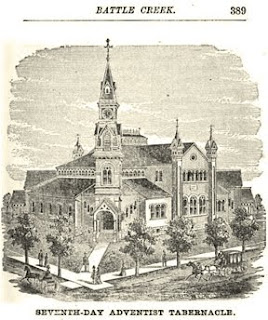 discredited wreck of the Millerite movement, and in the face of public scorn? Part of the answer is that her husband and other handlers enabled her success. Her own interpersonal and organizational skills obviously contributed to her authority, and to the authority of her visions. Her emphasis on the Saturday Sabbath enabled believers to separate themselves from others, and also to raid mainline protestant groups for recruits. Both recruits and longtime members relished the perfectionist discipline that promised to bring them into close relationship to heaven. This dynamic allowed for reversing scorn visited on Adventists back onto others.

Spencer Fluhman asked the question, why was Ellen White reproached and vilified by people outside of her movement? Clues to the answer might be found in protestant narratives that instantiated the fiction of mainstream Christianity and used Adventism, like Mormonism, as a foil against which “American” Christianity could be defined. White participated in this dynamic with some enthusiasm, even as her self-proclaimed alterity exerted its own pressure on American society, and on protestant denominations, especially with respect to temperance, diet, and health.
Email Post
Labels: Adventism alternative religious traditions conferences Ellen G. White religion in the gilded age

Julius said…
I'd like to thank to Amanda & Randall for your participation in last weekend's conference and providing your observations here.

I think Amanda is dead on. Malcolm Bull and Keith Lockhart in "Seeking a Sanctuary: Seventh-day Adventism and the American Dream" (http://www.amazon.com/Seeking-Sanctuary-Seventh-day-Adventism-American/dp/0253218683) probably provides the best interpretation of the dynamic of alterity that Amanda points to.

Paul McGraw's dissertation, "Born in Zion?: The Margins of Fundamentalism and the Definition of Seventh-day Adventism" (George Washington University, 2004), offers an excellent treatment of the Adventist identity question vis-a-vis Protestantism from 1840s to the 1990s. (Paul is writing the "legacy" chapter for our project.)

I've attempted a narrower study of the identity question in my dissertation, "Reactions to the Seventh-day Adventist Evangelical Conferences and Questions on Doctrine, 1955-1971" (Andrews University, 2005), by focusing on Adventist interactions with evangelicals/fundamentalists in the 1950s and 60s when anti-cult polemicist Walter Martin "exonerated" Adventists from the "cult" status.

As was commented on last weekend by some, there's much comparison that can be made between the Pentecostal experience of "mainstreaming" and the Adventist experience. You find an enigmatic interplay of (1) natural and self-conscious socio/theological positioning in the margins for differentiation and reinforcement of peculiarity; (2) triumphalist self-understanding as the "remnant church" and holders of "the truth"; and (3) desire for socio/theological acceptance and vindication. The (awkward?) combination of the three continues to place Adventism at this point in time somewhere off-center. Hence, contemporary Adventism has a lot of "both ... and," "yes ... but," and "no ... except" vis-a-vis evangelical and mainline Protestants.
October 26, 2009 at 5:27 PM