In the Footsteps of Phoebe

Welcome guest blogger, Cheryl D. Naumann. She is the author of In the Footsteps of Phoebe: A Complete History of the Deaconess Movement in The Lutheran Church–Missouri Synod. She is a graduate of Valparaiso University and a Lutheran Deaconess.

In the Footsteps of Phoebe
Cheryl D. Naumann

I commend to you our sister Phoebe, a servant of the church in Cenchrea. I ask you to receive her in the Lord in a way worthy of the saints and to give her any help she may need from you, for she has been a great help to many people, including me. (St. Paul writing to the Church at Rome –Romans 16:1-2) 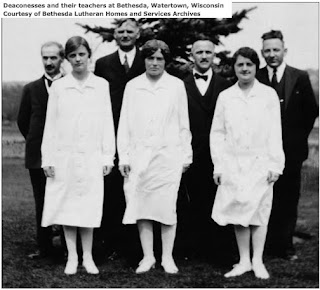 Covering the entire span of LCMS history, from the time of the Synod’s inception to 2009, In the Footsteps of Phoebe covers material that has previously never found its way into the historical annals of the Synod. This is not to accuse the Synod of not caring about women—but simply to observe that LCMS historians have consistently documented general histories without including an examination of what was happening with LCMS female workers at the same time and in relation to that history. So this book takes a close look at the initial and continued formation of diaconal ministry in the Synod, and how deaconesses have been intricately involved in the church’s mission, its doctrinal struggles, its renewed emphasis on Confessionalism, and so forth.

As the story of the deaconess movement unfolds, it overlaps with the stories of many other synodical interests—the LCMS Board for Missions, Board for Higher Education, and Board of Directors; the Lutheran Women’s Missionary League; the Walther League; Lutheran nurses and Lutheran hospitals; scores of Lutheran congregations and institutions; Radio Station KFUO; Valparaiso University; the Concordia University System; and countless elected synodical officials. I also look at deaconess identity, the importance of God’s Word, and the concepts of sisterhood, vocation, consecration, and a servant’s heart.

From 1919 to 1979, the Lutheran Deaconess Association (LDA), an autonomous organization (that still exists), trained women to serve as deaconesses in the Synodical Conference and the Missouri Synod. Graduates of LDA deaconess schools gave faithful service to hospitals, missions, and congregations of the Synod, where they engaged in a ministry of mercy that complemented the pastoral office—the ministry of Word and Sacraments.

The professional identity and role of deaconesses in the church evolved as the LDA sought to keep in step with changes in American society. When doctrinal disputes erupted within the LCMS from the mid-twentieth century onward, members of the LDA, those who educated deaconess students on behalf of the LDA, and the Lutheran Deaconess Conference, increasingly embraced theological positions contrary to orthodox LCMS teaching. Many members of the LCMS became disenchanted with the LDA and its training program, concluding that the Synod should assume responsibility for educating its own deaconesses. They concluded that the LCMS needed to train its own deaconesses to ensure faithfulness in their teaching, leadership, and service.

In 1979, the LCMS authorized its Board for Higher Education to direct Concordia University, Chicago to establish a full deaconess training program on its campus by the fall of 1980, and in 2001, the Synod sanctioned additional training programs at Concordia Seminary, St. Louis, and Concordia Theological Seminary, Fort Wayne. In 1980, nine deaconesses founded the Concordia Deaconess Conference—Lutheran Church Missouri Synod, to aid the Synod in “upholding and promoting deaconess service,” and to “provide opportunity for spiritual, professional and personal growth and fellowship” for deaconesses of the Synod.

Today, LCMS deaconesses continue to dedicate their lives to a ministry of mercy, at institutions, in congregations and schools, on synodical boards and committees, and in the home and foreign mission fields of the Synod. The deaconess community is growing, and perhaps for the first time in LCMS history, diaconal ministry appears to be embraced by the entire synod as a legitimate way for women to serve their Lord within the church.

I invite you to visit a website that supplements the reading of In the Footsteps of Phoebe at www.deaconesshistory.org. The site includes illustrations for the book, a comprehensive Bibliography, book reviews, and extended quotations (for example, an entire speech or sermon from which only a part is quoted in the book), as well as my “Woman of the Week” and “musings about history” blogs.
Email Post
Labels: deaconess gender and religion lutheran