Jones Versus Jones: Or, How Primitive Baptists Ended up on the Jon Stewart Show 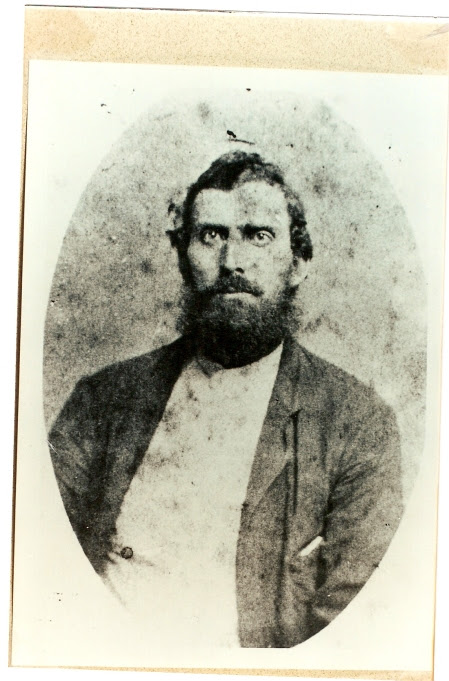 Some of you may have been following the discussion of the competing books on (and film rights to) the "State of Jones" in Mississippi during the Civil War already. My interest came mostly from thinking about my upcoming Civil War/Reconsruction class, and also thinking this would make a great exercise (had we access to the necessary sources) for my Theory and Methods of History class. I didn't think it a subject of interest to blog about here. Yet there is one issue that has arisen that makes it relevant here; more on that in just a bit.

Make room in your understanding of the Civil War for Jones County, Mississippi, where a maverick small farmer named Newton Knight made a local legend of himself by leading a civil war of his own against the Confederate authorities. Anti-planter, anti-slavery, and anti-conscription, Knight and thousands of fellow poor whites, army deserters, and runaway slaves waged a guerrilla insurrection against the secession that at its peak could claim the lower third of Mississippi as pro-Union territory. Knight, who survived well beyond the war (and fathered more than a dozen children by two mothers who lived alongside each other, one white and one black), has long been a notorious, half-forgotten figure, and in The State of Jones journalist Sally Jenkins and Harvard historian John Stauffer combine to tell his story with grace and passion. Using court transcripts, family memories, and other sources--and filling the remaining gaps with stylish evocations of crucial moments in the wider war--Jenkins and Stauffer connect Knight's unruly crusade to a South that, at its moment of crisis, was anything but solid. 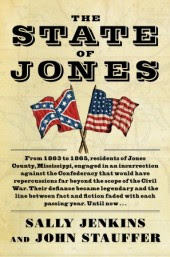 The discussion ensuing from the Stauffer/Jenkins entry has raised important issues for discussion. Start here for Victoria Bynum's three-part review of the work. The link takes you to part one, and then follow her links to parts two and three. John Stauffer and Sally Jenkins initially responded here; more recently, Stauffer has responded to more recent entrants into this dialogue, and some of Bynum’s critiques, here. Over at his indispensable blog Civil War Memory, Kevin Levin summarized some of the conversation, including a review by David Reynolds in the New York Times, which (as Kevin pointed out) basically summarized the criticisms made by Bynum and various commentators at Civil War Memory (see the comments section in the posts above for a fuller run-down on those; some are nasty and stupid, others are serious and worthy of consideration).

what I really mean is traditional Confederate treatment [of Knight], because it was Confederates like Dabney Maury and Robert Lowry who shaped the first accounts of the events in Jones, and their accounts stuck, right up until Dr. Bynum. And even though Southern Unionism has been much covered by professional historians -- we leaned heavily on William Freehling and Margaret Storey in particular -- there really aren't enough books about it for John's taste, or mine. The best one that I know of is More Damning Than Slaughter by Mark Weitz, which mounts a great argument about the toll desertion and Unionism took on the Confederate Army.

While some of this discussion has gotten heated, as things tend to do in the comments section of blogs, the most recent entries have involved a serious and substantive consideration of the issues involved, including the sometimes fuzzy distinction of history and myth, and the choices involved in popular history versus academic history (the Stauffer and Jenkins text originated as a screenplay for a movie, I think, and their work stylistically sometimes takes on a “you are there” tone common to a lot of popular history, hence occasioning this discussion).

Take, for example, the authors’ argument that Newt was likely raised a Primitive Baptist whose religious devotion led him to condemn slavery. Such conjecture is based on a single statement by Newt’s son, Tom Knight, who published a biography of his father in 1946. But Tom never stated that his father was raised a Primitive Baptist, only that he joined the Zora Primitive Baptist Church around 1885-86 (p. 14). Newt Knight may well have hated slavery, but the only definitive statement to that effect appears in Anna Knight’s 1952 autobiography, Mississippi Girl.

Knight was an antislavery, pro-Union dirt farmer who opposed the Confederacy morally, politically, and militarily. The Confederate officer who arrested Knight for desertion testified under oath that he was a Union man “from conviction.” We have the transcript. Not one but two of Knight’s children wrote memoirs in which they attested to his beliefs. Knight was a Primitive Baptist, a distinctly pre-War branch that flourished in Mississippi from the 1820s on, as Randy Sparks and other scholars have documented, and a central tenet of which was the equality of souls.

Our identification of Newton as a Primitive Baptist stems from multiple sources, including the fact that it was the dominant religion in the area and that both his father and grandfather were Primitive Baptists. Bynum tries to discount our interpretation by referring to the biography of his son Tom Knight, who said that Newton joined the Primitive Baptist Church around 1885. Tom Knight got the religion right but the date wrong, for conversion to Primitive Baptism was rare during the post-war period. The most accurate way to understand Newton Knight’s religious worldview is through the prism of Primitive Baptism.

And Sally Jenkins adds the following:

that Knight made many references to the Lord in an interview is not the sole suggestion that he was religious, merely one interesting strand. According to his son he was a Primitive Baptist, and according to his granddaughter he “did not believe in slavery,” which is a discussion that we’ve had before, I just didn’t want to belabor it on this site. Tom Knight’s memoir also contains several references to his father’s religious feeling, and very much jibes with Knight’s account of himself. Also, Knight’s first wife Serena was buried in a Primitive Baptist cemetery. Prof. Bynum’s book contains a lengthy description of the Knight family’s deep involvement in the Baptist churches of Jones County. We believe he was what was known as a “Hardshell.”

If indeed we view Newton KNight through the prism of Primitive Baptism, what would we find? In my reading of the records, the Primitive Baptists were very concerned with opposition to organized mission societies, and thus were opposed to the formation of denominations. They were very concerned with upholding the tenets of Calvinism. And their churches were populated by the kind of folk -- ordinary upcountry whites, predominantly -- who were skeptical of the pretensions of the slaveholding class, and later often became Unionists; or, if not that, kind of silently resisted the demands of the Confederate state. But did Primitive Baptists have much to say about slavery per se? They surely believed in the "equality of souls," but so did the leading figures of the Southern Baptist Convention, including those who attended the founding convention of the Confederacy and believed in the religious sanction for slavery.

So if everything that Stauffer/Jenkins assert about Knight's life is correct, I'm wondering how much this would have to do with his individual peculiarities, versus how much it had to do with Primitive Baptism.Enjoy this moment while you can, as I'm sure Primitive Baptists will quickly descend back into their former pre-Jon Stewart obscurity!

Update: Over at Civil War Memory in the comments section, John Stauffer has responded to my query -- I'm reposting it here for those who don't see it there:

To Paul Harvey:
Thank you for your comment and for your balanced assessment of the debate on your blog (“Jones vs. Jones”).

Our aim was to try to understand the interaction between ideas and material forces that make up a worldview. In the case of antislavery, multiple causes led people to that conviction.

As Randy Sparks notes in his terrific book, On Jordan’s Stormy Banks, many Primitive Baptists in Mississippi espoused antislavery views for theological and class reasons until the 1820s, when the gatekeepers of slavery effectively silenced these views. But as I said, Primitive Baptism alone does not lead to antislavery.
Other sources point to the emergence of Newton’s antislavery views: his parents never owned slaves; according to his granddaughter, he “did not believe in slavery”; he opposed secession and disliked the planter class; and he had great faith in the Union—-in essence, he was an American first, a Southerner second.

Additionally, in the cauldron of the War, it was common for whites and blacks to unite in order to survive and vanquish a common enemy (the Confederacy), a point wonderfully developed by Philip Klinkner in his book, Unsteady March. In any event, when Knight affirmed his loyalty to the Union in 1863, he sought through his actions to end slavery.

Luke Harlow said…
Fascinating post, Paul. My own sense is that, due to their biblicist commitments, Primitive Baptists in the antebellum South tended to endorse slaveholding in some form (and certainly rejected "radical abolitionism"). Whether that endorsement came for slavery "per se" or slavery "in practice" is probably harder to parse, but I would guess that southern Primitive Baptists were not exactly overwhelmingly opposed to slavery. John Crowley makes this point in his study of Primitive Baptists in southern Georgia and Florida, _Primitive Baptists of the Wiregrass South_ (UP Florida, 1999), in his discussion of debate over the slavery question within South-wide Primitive Baptist circles (see pp 86-92; for those interested, that particular section is up on Google Books).

In short, your concluding comment--"how much this would have to do with [Knight's] individual peculiarities, versus how much it had to do with Primitive Baptism"--seems exactly right. While it is probably impossible to say whether or not Newton Knight's religious views led him directly to an antislavery position, I would think that any kind of antislavery or racially egalitarian views he held would have put him out of step with the mainstream of southern Primitive Baptists.
August 25, 2009 at 1:23 PM

Seth Dowland said…
This whole debate is fascinating - a great lesson in popular history vs. academic history and in the way blogging can work (Kevin Levin's post has some trenchant thoughts about Doubleday/Jenkins/Stauffer's approach to the blogosphere).

Apropos of popular history and late-night Comedy Central shows, did anyone else see Chris Matthews on Colbert last week? He was touting his new documentary on the Kennedy brothers. He claimed that they "got Civil Rights done," to which Colbert retorted, "Yes, I just loved JFK's 'I Have a Dream' speech." Matthews caught the dig (I think) but barreled forward: "they were the ones who *did* civil rights." Blech.
August 25, 2009 at 2:21 PM

Rebecca said…
What Luke said. I made a brief comment over at Kevin's to say that determining someone's brand of religiosity in the absence of direct evidence is very difficult. Trying to do it with evidence like "Newt Knight said the Lord's Prayer" is even harder. AS you know, Paul, I'm deeply interested in what people in the past believed, and how that influenced how they understood human difference, but those two complicated topics have to be tackled with a lot of nuance and an appreciation for ambiguity. From what I've read Stauffer and Jenkins don't seem to have that. But I'm gonna stop taking the bloggers' words for it. I've ordered both books from Amazon and by golly I'm gonna read 'em. In a year or two.
August 30, 2009 at 4:29 PM

Paul Harvey said…
Rebecca (and Luke): In case you missed it, John Stauffer responded to my query which I had posted at Civil War Memory, and I reposted it here for everyone's benefit.

R, don't take the blogger's words for it; a lot of the comments (not Bynum's, who raises many legitimate issues, but many others who seem to be on some sort of vendetta against Stauffer/Jenkins) are just mean-spirited and wrong.
August 30, 2009 at 7:38 PM