A provocative essay appeared in yesterday's Chronicle of Higher Education. K. L. Noll offers up prickly ideas about the nature of truth and knowledge all the while distinguishing religious studies scholars from subjectivist, loopy 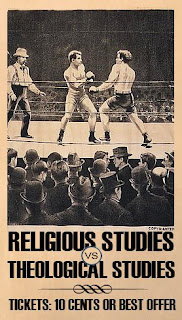 theologians. The essay reminds me of that great piece that appeared in Lingua Franca years ago titled "Is Nothing Sacred? Casting out the Gods from Religious Studies" (Nov 1996).

Highlights from K. L. Noll's "The Ethics of Being a Theologian"


Most people do not understand what religious study really is. Professors of religion are often confused with, or assumed to be allies of, professors of theology. The reason for the confusion is no secret. All too often, even at public universities, the religion department is peopled by theologians, and many of those theologians refuse to make the distinction that I am about to make....

Theologians who do not think of themselves as unethical nevertheless sell their pew-sitting laity a bill of goods. The failure of theologians to remind the members of their churches and synagogues that the Bible is an anthology of ancient literature composed by ancient people in an ancient culture has consequences. The laity are entitled to know that any god described in a biblical text is an ancient god, a byproduct of the ancient culture that produced the text. The god of the Bible is the sum total of the words in the text and has no independent existence. It would be reasonable to begin every theological discussion with the disclaimer "the god described in this sacred text is fictional, and any resemblance to an actual god is purely coincidental." This is not an outsider's dismissive opinion, but the reality, and theologians have an ethical obligation to teach that truth even if they also want to believe and teach, as is their right, that a god exists.

Am I trying to imply that theology is without value? Certainly not. I do not presume to tell theologians how to be theologians, and I will not attempt to define the value of theology. I simply request that theologians fulfill basic ethical obligations, such as the affirmation that theology is not knowledge and must position itself apart from those academic disciplines that try to advance knowledge, such as history, anthropology, religious study, and (perhaps especially) the natural sciences.

The comments below the essay are instructive in more ways than one. Minus the few that are on the order of "You Suck!" many find holes in Noll's logic. Quite a few think he has an overly confident view of objectivity. Notice, too, how much this sounds like various atheism vs. theism debates.
Email Post
Labels: randall's posts religious studies theology

Art Remillard said…
Many thanks for both the heads up on the article and the link to the Hitchens/McGrath debate. I've been looking for something like this to show in my intro course! You clearly don't suck.
July 28, 2009 at 6:21 PM