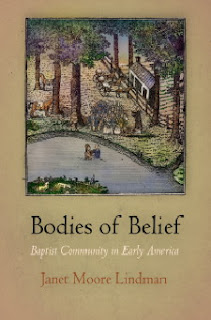 Baptists, according to Janet Moore Lindman in Bodies of Belief: Baptist Community in Early America (University of Pennsylvania Press, 2008), believed in “a body-centered religion.” I must admit that I was initially confused by what she meant by this, but as I read through this compelling work of scholarship it became clear to me that Lindman is using the term “body” to describe both the individual human bodies of specific Baptist believers and the collective “body” of believers that made up the core of Baptist community in early America.

Lindman starts with two traditional chapters tracing the emergence of the Baptist movement in colonial Pennsylvania and Virginia. (Those interested in New England Baptists will find very little here. I would recommend going to works by Carla Pestana and Susan Juster). By focusing on early American Baptists in both places Lindman avoids the common temptation to paint all eighteenth-century Baptists as “stalwart believers” who “overcame persecution” and posed a radical threat to colonial religious establishments. This popular view, which was articulated best by Rhys Isaac in The Transformation of Virginia, fails to take into consideration the fact that the ecclesiastical nerve-center of early American Baptist life was Philadelphia and the surrounding mid-Atlantic. Here Baptists always enjoyed religious freedom. By giving mid-Atlantic Baptists a central place in her story, Lindman’s readers will get a much more balanced and accurate view of Baptist life in the period.

Frankly, I thought Lindman could have pushed this point even harder. Baptist historiography has been too Whig for too long. Eighteenth-century Baptists are only important to historians as revolutionary threats to establishment, models of the religious poor rising up against wealthy elites, evangelical egalitarians, or forerunners of American democracy. Mid-Atlantic Baptists, however, tended to be cautious egalitarians. They were of the middling sort in socio-economic status. And they were rather institutional and authoritative when it came to church governance. Some of them were staunch Old Sides during the First Great Awakening. Moreover, I have always wondered why no one is studying eighteenth-century Baptists as part of the Atlantic world. Were early American Baptists really so indigenous to the British colonial landscape?

Chapter One, “Little Tabernacles in the Wilderness,” is the best thing I have ever read on mid-Atlantic Baptist life. Lindman’s debt to Jon Butler is evident throughout this chapter. She concludes that the story of Baptists in Pennsylvania is the story of denominational order, particularly as it relates to the influence of the Philadelphia Baptist Association. But Lindman also argues that in the early years of Baptist life in the region Baptist identity was never entirely clear. Early Baptists, for example, were influenced by the followers of Quaker apostate George Keith. She writes: “The Keithian influence is evident in the adoption of Quaker practice by several Baptist churches, including bodily decorum in speech and dress.” Some early congregations “used numerals to denote days and months, authorized plain speaking and dressing, and prohibited sweating oaths or fighting.”

Lindman concentrates on the paradoxical nature of Baptist communities. Were they radical and egalitarian? Yes. But they were also quite conservative. Baptist views on race and gender contributed to this mixed identity. She writes:

Baptists adopted the spiritual equity of the New Testament but built an institutional structure based on racial and gender asymmetry; they supported the inclusion of blacks into church membership but created separatist policies and waffled over slavery; they recognized egalitarian notions among male and female members but limited the role of women in the institutional church; and finally they endorsed a circumscribed model of masculinity while white male members gained authority and dominance within church polity.

Lindman makes a successful attempt at analyzing Baptist conversion, ritual practice, and church discipline through the theoretical grid of gender and, to a lesser extent, race. These chapters make up the heart of the book. Baptist conversion was feminine in nature. It was emotional. It stirred the heart. It could lead to excessive bodily activity. It resulted in love and devotion between fellow believers. And it was similar to certain forms of African-American spirituality.

While Baptist conversion was an individual experience, it was also a communal one. Baptist clergy worked hard at creating a “body” of believers whose individual “bodies” had experienced conversion. This kind of community was fostered by rituals such as water baptism, the laying on of hands, and the practice of anointing with oil. Lindman writes: “The convert underwent a highly personalized experience of spiritual transformation and then willingly placed him-or herself and his or her body under the command of other believers in a specified religious community.”

Membership in the Baptist body required placing one’s individual body under the authority of church leadership. Baptist church discipline was conservative and masculine. “Through the process of defining and maintaining orderly conduct among their members,” Lindman notes, “Baptist churches infused a new religious authority into a social order based on gender and race. The Baptist religion repositioned the bodies of its believers for their successful entry into the godly community at the same time it marked them with secular conceptions of difference.” In the end, Baptists advocated a “theology of democratic religion that welcomes all true believers,” but disciplined individuals in ways that “coalesced with the dominant hierarchies of secular society.”

In her last three chapters, Lindman continues her treatment of race and gender in the early Baptist community. Chapter Six, “Sisters in Christ,” focuses on spiritual kinship among Baptist women and the battle for women’s suffrage in Baptist meetings. Chapter Seven, “Free People in the Lord,” argues that Baptists—both in Virginia and Pennsylvania—did not fully embrace the abolitionist cause despite their egalitarian theology. My favorite chapter is Chapter Eight, “The Manly Christian.” Here Lindman argues that Baptist belief required a new form of masculinity that rejected the rational, Enlightenment, competitive, independent, camaraderie-driven masculinity of secular society. At the heart of this new Baptist masculinity was not only the embrace of a conversion experience informed by certain feminist qualities, but also the determination to do spiritual battle with the devil for one’s soul and the courage to face adversity through persecution.

The best thing about Lindman’s book is the way her theoretical reflections are grounded in meticulous research in Baptist church records, diaries, and other archival sources. If you have one book in your library on early American Baptists it should be Bodies of Belief. This is a major contribution to American religious and gender history.
Email Post
Labels: baptists evangelicalism fea's posts gender and religion lived religion new books religion in colonial America reviews

Curtis Freeman said…
Thanks for this post on Lindman's book. I've read it, though probably not as carefully as I need to. On the whole I liked what she did, but she stays so close to the sources at times that it's hard to see the forest from the trees.

I also resonate with your comments about the Whig interpretation of early American Baptists. Isaac does indeed perpetuate the monogenetic sense of origin. As you point out the political arrangements differed by region. So, monogenetic myth needs to be shattered. And good historians can help complexify the story. So I invite some of you do just that.

I think that it's not just the Whig interpretation that needs a magnifying glass, but the wider range of issues. For example, I traced the historiographical interpretations of Roger Williams over the years in my presidential address to the Baptist Professors of Religion. There was a hue and cry among those who read (very wrongly I think) Williams (and Baptists) as some sort of proto-democrat/s. I link that article here and invite any comments. But thanks for this post.