Today's guest post comes from our friend Steven Miller, author of the recent and much noted book Billy Graham and the Rise of the Republican South (the link takes you to the NY Times review of the book). You may find an interview with the author here, and find the book's web page here. Steven reflects on the latest release of the Nixon tapes and the ongoing revelations of the Billy Graham/Richard Nixon connection, and in particular how Nixon's political project dovetailed with Graham dreams of evangelical unity.

Thoughts on the Latest Graham-Nixon Tape
by Steven Miller 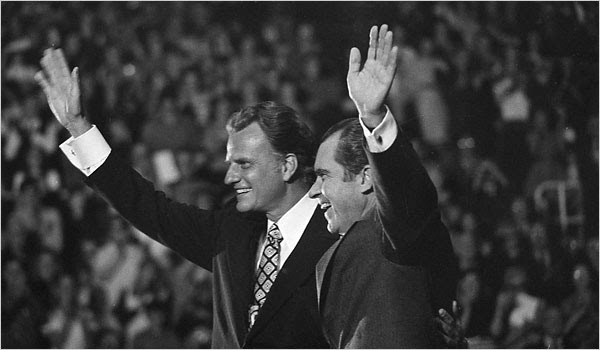 Tuesday’s latest tapes and papers release from the Nixon Presidential Library, from what I can gather, contains some juicy anecdotes, but no paradigm-shifting revelations (News flash: Richard Nixon was a cynical, embittered man—a master of political hatchet work and paranoid overreach alike). The release does, though, include another Billy Graham-Nixon conversation (February 21, 1973) that, like their now-notorious February 1, 1972, conversation, has gained attention for its notes of anti-Semitism. Indeed, it is noteworthy that the earlier conversation was not so exceptional after all. There is much to ponder here, and I do not begin to imagine that I have put this conversation in full context. Below I offer a few thoughts, written from the perspective of a student of Graham.

By Nixon standards, the tone of the 20 minute phone conversation was very upbeat, coming just after the treaty ending American involvement in the Vietnam War and just before the Watergate crisis really hit the Oval Office’s fan. The general theme was, We’ve proved ‘em wrong, haven’t we?—the “’em” being Nixon’s critics, real and imagined. Much of the conversation concerned the relationship between Israel and American Protestant leaders, especially in light of Prime Minister Golda Meir’s impending visit to the States. Several recent events had threatened that relationship, in the eyes of Nixon and Graham. Nixon cited Israel’s shooting down of a Libyan passenger plane, while Graham was smarting from recent statements by American Jewish leaders opposed to the ecumenical Key ’73 evangelistic campaign, with its manifest destiny-like slogan: “CALLING OUR CONTINENT TO CHRIST”. Both believed that Israeli and American Jewish leaders underestimated, at their peril, the latent anti-Semitism among Americans, even among good Christian folk. Unsurprisingly, Nixon put the matter more crudely: “It may be they have a death wish.” But Graham also suggested that Israel was in danger of alienating its Christian allies, especially if American Jews continued “overreacting” to the emerging “Jews for Jesus” movement, which was “just scaring them to death.” In a line that makes for an easy headline, Graham quoted the Book of Revelation (2:9, 3:9) in describing the kind of Jews who belong to the “synagogue of Satan.” As with the 1972 conversation, Graham certainly had in mind publishers of pornographic material; but, in the context of echoing Nixon’s distaste for the Fourth Estate, Graham also seemed to be thinking of high-profile Jewish liberals in the mainstream media. Graham, as I have written elsewhere concerning the 1972 exchange, “was willing to indulge Nixon’s prejudices and . . . voice a few of his own.”

I was struck by the way in which Graham casually cited dispensationalist eschatology in discussing matters Jewish with Nixon. Jews are “God’s time piece,” Graham declared to an agreeable, grunting Nixon, “and he has judged them from generation to generation, and yet used them, and they’ve kept their identity.” I was struck because Graham-Nixon communications often were rather devoid of theological content. At the same time, as I have argued, Nixon was more comfortable with Graham’s evangelicalism than has been assumed (to the extent Nixon was comfortable with anything or anyone). Either way, Nixon and Graham undoubtedly shared a strong criticism of liberal media outlets, such as Newsweek and the New York Times. “And Henry Luce would turn over in his grave,” Graham declared to Nixon, if Luce knew what the formerly friendly Time was now publishing. Many members of the liberal media happened to be Jewish. That is, Nixon and Graham chose to notice the presence of Jews therein.

The Graham who comes through in this conversation suggests the fine line between emerging Israel-philia and lingering anti-Semitism among early 1970s evangelicals. Graham saw himself as a strong friend of Israel, and he could cite his closeness with Marc Tannenbaum of the American Jewish Committee as evidence. At the same time, Graham remained keenly aware of how much Jewish leaders valued him as an ally. Tannenbaum was set to visit Graham in Montreat to discuss Key ’73. Graham clearly was most comfortable in a broker-style relationship with Jewish leaders, wherein they would explain evangelicals to their people and he would explain Jews to his.

In the end, this conversation confirms that Graham was indeed in Nixon’s “kitchen cabinet” during the immediate post-reelection period. When Graham and Nixon talked, they talked politics. Unprompted by Nixon, Graham proceeded to dump on evangelical critics of Nixon’s Vietnam policies, such as the liberal Senator Harold Hughes (D-IA), who was “pretending to be . . . a great Christian” and the moderate Senator Mark Hatfield (R-OR), whom Graham cited as “the big disappointment in political life—in politics that I’ve known.” At some level, of course, Graham kowtowed to Nixon like many a presidential confidante before and since. But in these weeks before Watergate consumed Nixon and threatened Graham’s reputation, Graham clearly saw Nixon’s political project (countering liberal hegemony with a new majority) and his own religious project (countering mainline Protestant hegemony with evangelical unity) as complementary efforts. “And just as you have changed the political picture, we hope to change the religious picture,” Graham said to Nixon in reference to the upcoming Lausanne evangelism conference.

Randall said…
Great post. I didn't know about this latest tape. I've used some selections from the tapes, with transcriptions, in my mod US course.
June 26, 2009 at 3:26 PM

Great post. Also, I just finished reading your book. I had read the diss. but think it's even better. You cover the Graham-Nixon relationship with remarkable clarity and nuance.
June 27, 2009 at 7:36 PM

Anonymous said…
It is sad that Anti-Semitism was still a problem in the early 1970s, but not surprising to me unfortunately. Anti-Semitism has been a part of world culture for centuries with Christians persecuting Jews. Even following World War II, with the creation of the Tri-Faith religion (created to counteract the rising threat of Communism), Anti-Semitism was still prevalent. In "Tri-Faith America", Kevin Schultz also mentions that when Tri-Faith was at its peak, many Protestant Christian college fraternities were excluding Jews from their organization. Of course it must be said that Catholics only wished for fellow Catholics to join their fraternites and even Jewish fraternities wished to only admit fellow Jewish members. Obviously I know that discrimination will always be an issue, but I guess I thought that even though Tri-Faith failed, with the help of the Civil Rights Movement, Anti-Semitism would not be used by the most powerful man in America.
December 13, 2011 at 11:54 AM