Niebuhr: Man for All Seasons

Arthur Schlesinger called him “America’s wisest and most influential religious thinker.” Not long after 9/11 David Brooks praised him as a “humble hawk,” and a faithful guide in trying times. Niebuhr is a bit like Churchill. (Not Ward, but Winston.) Liberals and conservatives both want to claim his legacy. (See Paul and John Fea’s thoughts on Niebuhr and Obama). 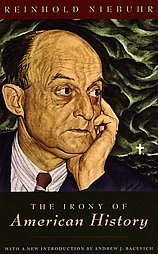 In the most issue of the NYRB, Brian Urquhart reviews the reissue of Niebuhr’s Irony of American History and two other Niebuhr-related books (“What You Can Learn from Reinhold Niebuhr,” NYRB, 26 March 2009). “A fog of know-nothing ideology, anti-intellectualism, cronyism, incompetence, and cynicism has, for eight years, enveloped the executive branch of the United States government” Urquhart begins. “America's role in the world and the policies that should shape and maintain it have been distorted by misguided decisions and by willful misinterpretations both of history and of current events. That fog is now being dispersed, and the vast intellectual and managerial resources of the United States are once again being mobilized.” But Urquhart breathes a sigh of relief: “That Barack Obama has made clear his admiration for one of the books under review—Reinhold Niebuhr's The Irony of American History—is in itself reassuring.”

I am particularly interested in Urquhart’s assessment of Andrew Bacevich’s book, The Limits of Power: The End of American Exceptionalism.

Andrew Bacevich is a devoted disciple of Niebuhr, and his latest book is very much in the Niebuhrian spirit, which he applies with great skill and originality to the problems, mostly of our own making, that now beset the United States. Bacevich retired from the US Army as a colonel and became a professor of history and international relations at Boston University. An earlier book, American Empire: The Realities and Consequences of US Diplomacy (2002), assailed the myth of the US as a reluctant superpower and urged it to act openly as a benevolent leader in the world. His son Andrew, to whom his present book is dedicated, was killed in Iraq in May 2007. A traditional conservative, Bacevich's style is compounded of military clarity, great eloquence, and invigorating overtones of Oliver Cromwell, Savonarola, and other inspired reformers. His book is both highly readable and enormously worth reading.

For more of Bacevich on this timely American prophet, see Bacevich’s essay that appeared roughly a year ago in Historically Speaking: “The Illusions of Managing History: The Enduring Relevance of Reinhold Niebuhr.”
Email Post