Public History and the Pueblo Revolt of 1680 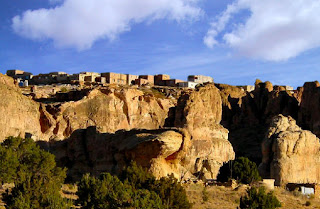 On this blog recently, we have posted quite about religious intolerance. This does my heart good because not only is this one of central areas of interest but also because I am teaching a course in religious intolerance this semester. One of my main claims is that Americans have a hard time recognizing intolerance, or even hatred, in public culture, so some prefer histories of collegiality to histories of conflict and colonization. However, I am teaching this course in New Mexico, which has a long history of colonization and my students seem more keen to histories of conflict and repression. Moreover, the topics I lectured on for my second class actually occurred in New Mexico, which means that I have the benefit of pointing out local sites that our central to these case studies.

Last weekend (I teach on Saturdays), I presented the Pueblo Revolt of 1680 in which Pueblo peoples successfully revolted, and thus, were free from Spanish rule, military and spiritual, for twelve years. My students were pretty familiar with the story, except I provided more detail to what happened to Franciscans who decided to stay at their missions. Suffice to say, their fates tended to be fairly gruesome. The revolt is a brilliant case study of both Catholic and Pueblo intolerance. Franciscan friars attempted conversion by removing indigenous religious praxis, and the Pueblo, involved in the revolt, inverted Catholic ritual and tortured Franciscans who stayed behind. The history of this religious encounter is bloody and tragic. What makes this case study unique is that I can point to the places of this encounter, and these places are more tangible because they are so nearby.

Moreover, many of my students have visited the Cathedral Basilica of Saint Francis of Assisi in Santa Fe and the Acoma Pueblo at Sky City. These sites present a narration of this 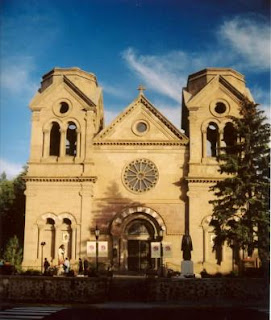 dramatic event and the larger history of colonization in what is now New Mexico. Tourists visit these sites each year and imbibe in the visions of Catholic-Pueblo encounter. They consume cultural artifacts as well as stories. I have also been a tourist at these cultural sites, and what becomes clear is that the Catholic vision and the Acoma Pueblo vision of the revolt and Spanish missions are starkly different. The Catholic vision focuses upon the benefit of the missions and glosses over the revolt (the twelve years of Pueblo autonomy is missing). In addition, the cathedral sponsors an event every year that retraces the flight of the Franciscans from Santa Fe. At Sky City, an Acoma tour guide leads hapless tourists through the village of the mesa and tells tales of encounter that vary depending on the audience. Our tour guide told me at the end of the tour that she has to decide how pro-Pueblo her tour can be based on her audience. Thus, I get to hear the story of "flying lessons" for priests privately. Most tourists, generally middle to upper class white men and women, seem to prefer their tour free of conflict and colonization. Intolerance still makes us uncomfortable, it seems.

This week, Historiann posted "Never mind the slavery, have you dipped a candle yet?" and pointed out the desire for conflict-free tourism at historical sites, particularly in regard to slavery. She writes:
Now, it would be easy for all of you groovy, liberal, non-Southerners to roll your eyes and chuckle and slap your foreheads in mock disbelief at the racist fools who run North Carolina house museums. But I think that the problem diagnosed so accurately by Professor Alderman is a problem in many house museums and historic sites all over the country. This story raises the important question of what historic sites and house museums are for: are they opportunities to dip candles, admire high-style material culture, and imagine our (white) selves playing dress-up? Or are they opportunities to learn more broadly about the lives of all people in a given period of history and how they related to one another?

As a professional historian, I’d say that the latter is a worthier goal than the former. But let’s be clear: it’s not just southern public history sites that “whitewash” history. Something I’ve observed in my travels across the country, stemming from my interest in borderlands warfare in the colonial Americas, is that some of the most wretched and/or totally hapless European or Euro-American forts or missions–the fort at Pemaquid, Maine, for example, or Fort No. 4 in New Hampshire, or Jemez Mission in New Mexico–have been excavated and/or lovingly (and sometimes imaginatively) re-created in the twentieth century, whereas the Indian villages or forts that laid them to waste and and long outlasted them have not been. (Jemez Mission includes some reconstructions of the foundations of Indian dwellings outside the mission, however.) Jemez Mission was reconstructed by the Works Progress Administration, and reflects in many ways the prejudices of history as it was practiced in the 1930s. It seems like it’s time to revisit the assumptions that undergirded these public history projects from thirty, fifty, and eighty years ago.

I agree with Historiann that we need public history to be revisited at these sites, so we can reflect on the unpleasant and the intolerant in our histories. Moreover, how different would tourists find the history of the Pueblo Revolt if the Catholic and Pueblo narratives rested side-by-side rather than separately presented? Would tourists appreciate the unflinching presentation of colonization and the violence of the revolt? Or would we rather "dip candles" and consume Pueblo artifacts than encounter the unseamy side of American history?

Will said…
Is "religious tolerance" a relevant category for analyzing the Pueblo Revolt itself or how it is presented in a public forum? I have strong doubts.

The Pueblo Revolt was a response to Spanish imperialism, a process in which, whatever the intentions of the order or individual friars, the missionaries played a role. It was not a failure on the part of the Pueblo to engage in religious dialogue.

Should the Pueblo people have "tolerated" imperialism?

Having said that, the issue of "tolerance" might be a worthwhile secondary category, but one more appropriate to apply to the Spanish than the Pueblo ( even there, somewhat anachronistically, I suppose). I don't think you can discuss tolerance, as an empirical issue or a moral-interpretative category, without some attention to power.

In this instance, it seems to me, as the invaders, the Spanish had moral obligations (and complicity) that the Pueblo did not. They were invaders suppressing the way of life and freedom, including the religious lives, of the Pueblo.

If notions of "just war" have any legitimacy, there was (arguably) moral legitimacy in the Pueblo revolt. As to the question of whether the Franciscans were legitimate targets in such a conflict, again, to the degree that their work as missionaries was tied to the suppression of Pueblo, it seems to me that they were.

Does that exonerate all Pueblo actions in the revolt? Of course not. But, from the viewpoint of power, and the question of the relative moral positions of the invader versus the victim of invasion, it makes a significant difference.
February 14, 2009 at 7:18 AM