The Making of a Catholic President


Today's guest post comes from my graduate student Brad Hart, who blogs at American Creation. Brad reviews Shaun Casey's book about religion and the election of 1960. Thanks to Brad for taking this on and guest-posting for us! For more of his work, see his great recent post about Puritan laws against "seed-spilling." 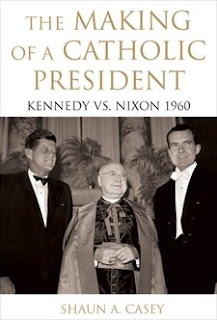 Shaun Casey's new book, The Making of a Catholic President: Kennedy v. Nixon 1960, examines how religion -- in this particular case, Catholicism -- became the predominant issue in the presidential election of 1960. In addition, Casey explores how both Nixon and Kennedy used the "religion question" to their benefit, and how a plethora of prominent religious figures took to the stage of national politics, in an effort to "protect" the American democratic process.

From the beginning, Casey attempts to resurrect the anti-Catholic sentiment that permeated American politics during the early part of the 20th century. By invoking the "Ghost" of Al Smith, Casey effectively recreates the tumultuous political environment that Kennedy was to face head-on during his bid for the White House. With Kennedy emerging as a front-runner to the presidency, Protestant organizations, leaders, and media outlets embarked on a collaboration to shed light on the perceived "dangers" of a Catholic at the head of a democratically elected government. As Casey states:


Two substantive considerations were feeding their fears. First, the traditional teaching of the Catholic Church was at variance with American conceptions of religious liberty and of church-state relations. Might a Catholic president be used by a politically powerful church? Second, there were policy issues on which there was a Catholic position, and a Catholic president might steer national policy in those directions (55).

As debates over issues like birth control, funding for private schools, and a possible American ambassador to the Vatican began to rise, so did the fears of Protestants, who were quick to remind the American populace of past papal declarations (specifically those of Leo XIII), which had "decried the separation of church and state as a shibboleth of doctrinaire secularism" and "called for Catholics to penetrate wherever possible into the administrations of their countries' civil affairs" (138). As a result, the efforts of organizations like Protestants and Other Americans United for Separation of Church and State (POAU), ensured that the anti-Catholic sentiment that had led to the demise of Al Smith's political ambitions was again positioned to strike a fatal blow at Kennedy's run for the White House.

Despite the obvious hostility to a Catholic president, Casey points out that the Kennedy camp made a concerted effort to reach out to Protestants, in the hopes of gaining understanding and support. Casey writes:


Kennedy displayed a nimble and sophisticated grasp of the anti-Catholic forces he faced. The emerging strategy contained many elements that had served him well and would be sorely tested in the general election. Kennedy showed a willingness to admit his vulnerability regarding his Catholicism, to reach out to anti-Catholic Protestants...and to learn more about them. The listening sessions produced some direct public dividends, but they also gave the campaign insights into just how serious they had to take the threat (79).

On the flip side, the Nixon camp faced its own share of problems on the religion issue. To take advantage of the anti-Catholic sentiment by attacking Kennedy's faith out in the open would have proven fatal, but to ignore it entirely would be foolish. As a result, Nixon instead chose to work covertly with prominent Protestant leaders, in an effort to use their positions and status to attack Kennedy's Catholicism. Casey points out that Nixon relied heavily on the efforts of former Missouri congressman Orlando Armstrong, who "outlined a series of steps that the campaign could take in order to exploit Kennedy's Catholicism" (102). Paramount to his plan was to enlist the involvement of notable Protestant leaders and organizations like Billy Graham, Gerald Kennedy, Norman Vincent Peale, the National Association of Evangelicals, the Masons, and the POAU. By gaining their support, Nixon was able to leave the "dirty work" of attacking Kennedy's religion to Protestant leaders, who were more than willing to go to battle against a Catholic candidate.

One particular example used by Casey to illustrate the powerful impact of religion on the presidential race was the August, 1960 meeting of Protestant ministers at the Mayflower Hotel in Washington D. C. It was here that several prominent religious leaders met to "put a public face on Protestant opposition to Kennedy's candidacy" (123). However, as Casey points out, the meeting (which had been organized primarily by Billy Graham and Norman Vincent Peale) turned out to be a public relation's nightmare for Nixon, who, despite having no official ties to the meeting or the Protestant leadership, was forced to disavow the meeting's pronouncements. Instead of shedding light on the "religion issue" as being a "a real and vital issue that must be handled in the spirit of truth, tolerance and fairness," as Peale had hoped, the meeting portrayed the Protestant opposition to Kennedy as a "bigoted" demonstration of ecclesiastical arrogance (143-144). For Casey, this was a "defining moment" in the final weeks of the election.

It was these last minute mistakes that allowed Kennedy to capitalize of the religion issue. In his final chapters, Casey outlines how the Kennedy campaign turned the issue in their favor by suggesting that the Protestant opposition was what the American people really needed to fear. Casey writes:


Here, Kennedy took the separation of church and state, the most powerful tool being used against him by Protestants, and turned it in his favor. He affirmed it categorically and proceeded to show how his detractors were in fact violating this principle in their attacks on him. He stated that he believed in a country that was not officially Catholic, Protestant, or Jewish. No public official should request or accept instructions on public policy from the pope, the National Council of Churches, or any other ecclesiastical source. No religious body should seek to impose its will directly or indirectly upon the populace or public officials. Religious liberty should be so inviolable that an act against one church should be treated as an act against all (165-166).

By reversing the religion argument against his political opponents, Kennedy was able to successfully portray the pro-Nixon Protestant leadership as being guilty of the very same charges they had leveled against his campaign, and in the waning hours of the election, this provided all the momentum that Kennedy would need to emerge victorious.

In a nation where politics are literally saturated with religious overtones, Shaun Casey's The Making of a Catholic President serves as a poignant reminder of how the "religion question" can be better served when politicians seek understanding rather than public support from the ecclesiastical community. As Casey states in his conclusion:


Kennedy was not satisfied to accept that Protestant leaders were mostly against him. He and his brother Robert took the time to try and find out why this was the case. They did not seek formal endorsements from Protestant leaders; instead, they sought understanding. It would be a good thing for the U.S. polity if people seeking public office spent less time pandering for public support from religious leaders and more time listening to religious leaders talk about the concerns and aspirations of their organizations' members. If the United States is to make any progress in transcending the current political gridlock, conducting civil discourse across religious divides will be critical to that progress (204).

Please help us by acquiring this Catholic Traditionalist CD and by making a donation
to one of the few left of the remnant Church Militant; designed to expose the
masonic evils of our world and implement philosophies, technologies, and economies
designed to preserve and protect present and future generations.

All challenges or assistance welcomed and encouraged.