The current issue of Newsweek tips us off to the forthcoming Alexandra Pelosi documentary, The Trials of Ted Haggard, now being advertised by HBO. Wow... If Pelosi's whimsical Friends of God and Journeys with George are any indication, this should be a real treat. Set your DVRs. I've used Friends in my Religion and American Culture class, and it's worked very well. 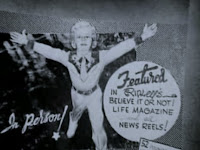 I encourage blog readers to get a copy of Marjoe, an Oscar-winning 1972 documentary that will knock your socks OFF!!! I had not seen it until recently. What a revelation. A sleeper, for sure, the movie is about a one-time child pentecostal preacher who, as a jaded twenty-something, starts to test the boundaries of authenticity and holy-rolling antics. Marjoe Gortner later achieved some fame as a B movie actor--he starred in Earthquake, a classic disaster film from the Me Decade. But this picture takes us back to his days as a conflicted evangelist . . . “Should I stay or should I go now.” Marjoe's Mick Jagger-esque chicken dancing down the aisles in tent meetings and tabernacles is something to behold. The music that accompanies the former kid preacher’s Leap-of-Faith swagger could melt the heart of even the most stolid atheist. This one merits in-class viewing, for sure.

John G. Turner said…
Randall, you amaze and scare me. How do you find such good material?

My wife just nixed getting rich by training our daughter as a baby preacher. I'll have to think of something else.
January 14, 2009 at 8:44 AM

I can only work on my very smart border collie, Beatrice. I think she could go on the circuit. My wife has been teaching her a trick that makes Beatrice look like she's praying!
January 14, 2009 at 8:57 AM

Kelly J. Baker said…
Child preachers are fascinating because religious communities understand them, often not always, as somehow closer the divine. What I find the most interesting is what happens to these kids as they get older or if they begin to challenge authority.

I think about Orsi's work on Catholic children. Children made adults nervous because the adults wanted them to follow a certain world view but the kids did not always follow the idyllic models of religious childhood. Children were the representations of adult hopes and ideals but they also navigated the religious worlds differently from their parents.

Anonymous said…
Excellent stuff. I just added Friends of God, Journeys with George, and Marjoe to my Netflix queue. Is there any scholarly work on child preachers (specifically in charismatic churches/pentecostalism that anyone here could point me to? I'm quite intrigued by all of this.
January 14, 2009 at 12:30 PM

Michael Hammond said…
Randall, knowing a bit about your musical background, you might be interested to know that a soundbite from Marjoe appears in the song "Mission" from the Kings's X album "Gretchen goes to Nebraska" from 1989. It's not Marjoe himself, but one of the preachers at a tent revival who is talking about how he will go down and pick out a new Cadillac and "get it dusty and dirty and use it for God." I saw Marjoe about ten years ago and finally figured out where that quote had originated. To bring things full circle, King's X is comprised of three pentecostal-influenced musicians.
January 14, 2009 at 8:26 PM

Randall said…
Man, the music was terrific in Marjoe.

Your comment about the music sample reminds me of hearing a Grey Gardens line in a Rufus Wainwright song. Was a great fit.
January 15, 2009 at 9:52 AM