New Book: Encounters of the Spirit 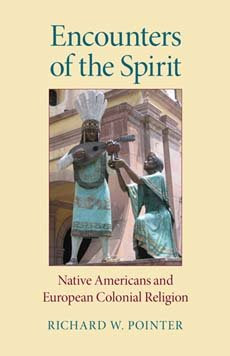 By John Fea
I am just finishing up a review of Rick Pointer's excellent monograph, Encounters of the Spirit: Native Americans and European Colonial Religion (Indiana, 2007). The review will appear at some point in Fides et Historia. Here is the book's jacket blurb:
Historians have long been aware that the encounter with Europeans affected all aspects of Native American life. But were Indians the only ones changed by these cross-cultural meetings? Might the newcomers' ways, including their religious beliefs and practices, have also been altered amid their myriad contacts with native peoples? In Encounters of the Spirit, Richard W. Pointer takes up these intriguing questions in an innovative study of the religious encounter between Indians and Euro-Americans in early America. Exploring a series of episodes across the three centuries of the colonial era and stretching from New Spain to New France and the English settlements, he finds that the flow of cultural influence was more often reciprocal than unidirectional.
Since I am reviewing the book elsewhere I will not elaborate any further except to say that I have yet to see a book that does a better job at integrating the "New Indian History" with colonial religious history. Here is a draft of the last two sentences of my forthcoming review:
It is not an exaggeration to say that Encounters in the Spirit should force us to rethink everything we know about early American religious life. After reading Pointer’s work it is hard to think about Catholics, Puritans, Anglicans, evangelicals and Quakers in colonial America without also reflecting on the Native Americans who influenced their spiritual sensibilities.