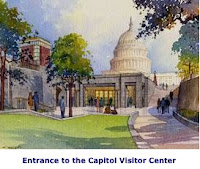 At the Washington Post’s “On Faith” section David Waters writes: “Normally, I'm for keeping church and state out of each other's business as much as humanly possible. . . . But lately, I'm beginning to think that evangelical Christians who are complaining about the ‘War on God in America’ have a point.” And at the National Review John J. Miller blasts “Washington, P.C.” and the planners of the center for their shaky grasp of history and their naked secular agenda.

On one level I’m thrilled by this debate. What better way to get students engaged in history battles than to use a current skirmish as an example? I’m also intrigued by the whole thing because of the current research I’m doing on this subject.

And then, I also wonder if evangelicals have a point. Is there something to the culture of grievance that is such a significant part of the faith? (See other examples of scrubbing God from history in the above essays.) That grievance bit is a larger conservative phenomenon that goes back at least to Goldwater’s campaign. (See Rick Perlstein’s wonderful 2006 article in TNR, “What is Conservative Culture?”) I know that conservatives, whether evangelical or not, don't have a corner on the embattled market. But I do think the seige mentality works better in conservative circles.

A letter to the editor that appeared in USA Today a couple months back illustrates that chip-on-the-shoulder worldview pretty well: “Those of us old enough to remember life under a predominantly liberal worldview . . . remember with pain the complete marginalization and denigration of evangelicals. . . . We remember our essay papers being marked down by teachers intolerant of any worldview other than the liberal one; we remember family members calling us ‘cultists’ and peers mocking us openly for our faith. Christians developed an ‘underground’ mentality, removing ourselves from the public forum.”

Is there a real chip on that shoulder or is it just a rhetorical one?
Email Post
Labels: evangelicalism randall's posts religion and politics

rjc said…
I've always interpreted that "grievance culture" to an identity of persecution that seems to be a prevalent part of the Evangelical world. I can't tell you how many times students have asserted that Christians are persecuted, under attack, oppressed, and otherwise marginalized in U.S. culture. Identifying as one of the "persecuted" in this manner seems to be an important part of their identity, and I think in their minds it has a biblical significance.
December 11, 2008 at 3:54 PM

Anonymous said…
I wonder how much this 'grievance culture' has to do with emulating the New Testament. Christians are supposed to be like Christ, and Christ was executed by the state. Much of the rest of the New Testament consists of accounts of persecution. It's like it's in the faith's DNA. If you aren't being persecuted, you aren't a Christian.

Did 19th century American Christians feel like this? Did Henry Ward Beecher or Charles G. Finney rail against the persecution of the faithful? Of course, they had alcohol and slavery to rail against. Interesting topic, though.
December 14, 2008 at 8:31 PM