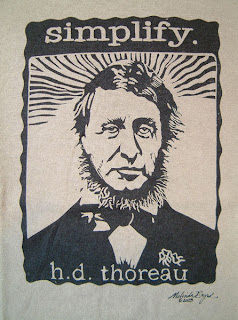 Recently, my family and I took a day trip to Walden Pond and the town of Concord, Massachusetts. I snapped a few photographs of the autumnal landscape and the New England townscape and sent them to some friends and relatives. I received this email response from one of my cousins who happens to be a high school English teacher.

"I went to the woods because I wished to live deliberately, to front only the essential facts of life, and see if I could not learn what it had to teach, and not, when I came to die, discover that I had not lived."

No commentary. No personal reflection. Just the words of Henry David Thoreau. I should also mention that I telephoned an aunt of mine that same morning (she, too, a high school English teacher) to tell her of my impending trip, and she literally cried; she wanted to be there so badly. “Oh, you have to tell me all about it,” she insisted. “You have to take pictures! You have to remember to visit Nathaniel and Ralph and the rest of them for me!”

And so we entered the frenzied clutter of cars and pedestrians and cyclists that is Concord’s Main Street on a perfect weekend in October, plopped the two-year-old in the stroller, and started for Sleepy Hollow Cemetery. It seemed that all signs pointed to our destination—Authors Ridge. After maneuvering toddler and stroller over cracks and roots and rocks and cobble, we reached the summit and paused in front of the modest stone markers placed over the remains of great writers made into myths. Several people had already paid their respects by leaving various mementos of their journey to what Louisa May Alcott once pseudonymously called “this modern Mecca” (she used her nickname Tribulation Periwinkle). 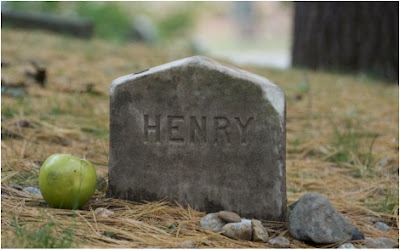 Little did Alcott know—or perhaps she knew quite well—that she would be visited by similar sorts of pilgrim-tourists who flocked to Concord in the 1860s and who, in the words of Alcott, “roost upon Concordian fences, chirp on Concordian doorsteps, and hop over Concordian fields and hills, scratching vigorously, as if hoping to unearth a new specimen from what is popularly believed to be the hot-bed of genius.” I wonder how much today’s roosting, chirping, hopping, scratching, and hoping resemble that of the nineteenth century. I wonder how much the myth has changed since the The Scarlet Letter (1850) became THE book to study for the English AP test. I wonder when high school English teachers started crying over the Transcendentalists. And I wonder why I felt so happy to be there. 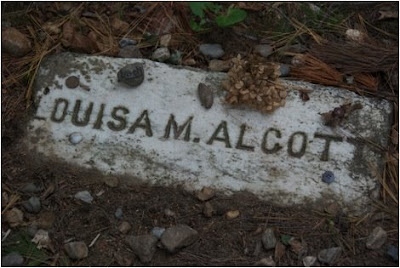 So to all you college professors who teach courses on religion in America—the next time you’re covering the Transcendentalists, don’t just spend the hour situating this or that author within the larger movement of romanticism or placing this or that idea within the larger tradition of liberal Protestantism. Instead, remember your audience. Hell, remember yourself. Reflect upon how this ridiculously quotable, glaringly tiny group of American thinkers became so pervasive in American culture and so interesting or boring but nonetheless known to you and your students. Heaven knows they’ve never heard of old John Winthrop, who, by the way, you can also visit next time you’re in the Boston area at the King’s Chapel Burying Ground.

And to all you folks who plan to visit the site of Thoreau’s shed and remains, watch out for the high school cross country teams at Walden Pond and skateboarders at Sleepy Hollow Cemetery. They’re courteous, but many.

Randall said…
This gives me all the more reason to head out there! Thanks for the post. I've heard only good things about the site.
November 12, 2008 at 3:30 PM

Phil said…
Great reflections on your travels. I've heard good things about Gura's book, and I read Grodzins a few years back. It is a whopping 600+ pages, but worth every minute. One gets a real sense of Parker's every move, his complexities, struggles, and triumphs.

Anonymous said…
Walden Pond is often crowded, but oh, it is a pleasant place. Thanks for highlighting it.

BTW, has any of you ever read Lydia Child on child-rearing? Child is most famous for her poem, "Over the river and through the woods," but she's also fascinating as a representative of the Concord/transcendentalist milieu. Her ideas about on bringing up children, and in particular her reflections on religion for the young, are very interesting.
November 13, 2008 at 7:58 AM

Brett Hendrickson said…
There's a great essay by John McPhee (a personal favorite) called "Five Days on the Concord and Merrimack Rivers" in his 2007 collection Uncommon Carriers that leads the reader with Henry David Thoreau and his brother on a boating trip up the mentioned rivers. A great read for anyone who'd like to tour the area but is stuck in the midwest or elsewhere!
November 14, 2008 at 7:13 AM

Anonymous said…
I've read Henry David Thoreau's account about the Merrimack River (I was particularly interested because I live less than a mile from the Merrimack). It's a great read, but it's hard to tease out information about what he was actually seeing and experiencing. He'll begin talking about some mill house he's looking at, and before you know it, you're knee deep in allusions to Greek and Roman literature!

It's actually quite astounding how educated HDT was. From one point of view, we makes Meriwether Lewis's learned journal seem like kindergarten stuff. On the other hand, at least Mr. Lewis takes time to describe clearly what he's seeing. (Granted, their objectives were quite different.)
November 14, 2008 at 8:30 AM