Religion and the Louisiana Purchase 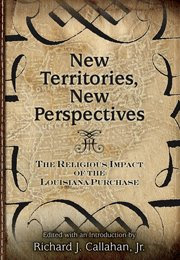 In 2004 over twenty scholars of religion in the Americas gathered at the University of Missouri-Columbia for the conference “Moving Boundaries: American Religion(s) through the Louisiana Purchase.”  Richard Callahan, chief organizer of the conference and assistant professor of religious studies at UM, has spent the last few years editing a selection of essays devoted to understanding the complex religious dimensions of a territorial purchase that linked the cultures of the nascent United States, Spanish and French colonial empires and the circum-Caribbean world on an enormous and perhaps unprecedented level in American history.  The result of Callahan’s innovation and diligence is the book New Territories, New Perspectives: The Religious Impact of the Louisiana Purchase (Columbia: University of Missouri Press, 2008).  Like Thomas Tweed’s groundbreaking book Retelling U.S. Religious History, Callahan’s edited collection of essays is a reformulation of the relationship between religion and place in the United States as manifested in the Louisiana Purchase of 1803.  Or, to use the words of Callahan in his introductory remarks, it is an opportunity to examine how “Native Americans, Africans, African Americans, and others competed and at times cooperated with the new nation, as space, authority, and identity were refigured into the story of the United States.”
Contributors include Peter Williams, Amanda Porterfield, Charles Long, Paul Christopher Johnson, Michael Zogry, Douglas Henry Daniels, Carole Lynn Stewart, Elaine Lawless, and John Stewart.  Topics include religious landscape and architecture, sex and violence, Indian removal, jazz, Melville’s The Confidence-Man, the Deep South roots of Pentecostalism, Mardi Gras, the cultural history and representation of New Orleans, and the integral role that Vodou played in the Louisiana Purchase. 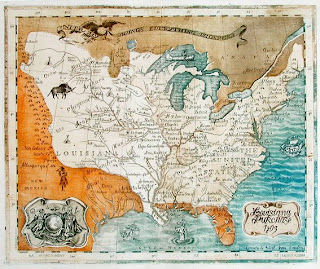 The breadth and importance of this book is only matched by the academic credentials of its contributors.  New Territories, New Perspectives also begs the question: to what extent have historians taken seriously Tweed’s call for new narratives of American religion?  Have historians followed the example of those who contributed to Retelling U.S. Religious History over ten years ago?  Is the field of American religious history sufficiently “reoriented,” “recentered,” and “retold”?  If so, then what’s next?  If not, then what happened?  To begin answering these questions, I suggest you read Callahan’s New Territories, New Perspecctives.
Email Post
Labels: mike's posts new books

Anonymous said…
There you go again, Mike, prompting us to bold reflections with another thoughtful post.

I’m not sure the field has been reoriented, retold, or reframed sufficiently—and this post reminds me of an ASCH session I attended at the 2000 AAR that asked “Is there a center to American religious history?” (and published subsequently in 2003 in the JAAR)—but certainly conversations are moving in new directions.

For my own interests, as I’ve suggested in some of my own posts, I’m noticing how much work is taking what I see as a transnational focus, or even global orientation (perhaps gathering inspiration from Atlantic World kinds of studies).

Tweed’s _Crossings and Dwellings_ helps us to “reorient” conceptions of ideas and practices with a new geographical, spatial vocabulary, and works such as Alan Scot Willis’s study of Southern Baptists, race, and African missions, or Tommy Kidd’s recent book on American evangelicals and Islam, or even Edward Curtis’s analyses of the Nation of Islam, among many others, moves in these kinds of directions.

Perhaps a guest post by Tweed in the future might, in conjuction with your thoughts, give us some more to chew on?
November 23, 2008 at 2:51 PM