I am the eggman (woo), They are the eggmen (woo), We were bigger than Jesus

Will miracles never cease! The Guardian reports that the “the Vatican has finally announced that it likes the Beatles.” A semi-official newspaper of the Holy See has praised the Fab Four’s “unique and strange alchemy of sounds and words.” Though not 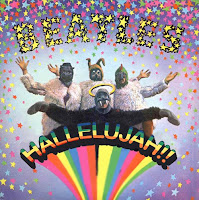 sanctioning the Beatles penchant for alchemicals in general—lysergic and THC, the sort that turns rock Gods into walruses—the Vatican has feted the White Album’s 40th.

The chill came in 1966 when John Lennon told Maureen Cleave of the Evening Standard about his views on Christianity: “Experience has sown few seeds of doubt in [Lennon]: not that his mind is closed, but it's closed round whatever he believes at the time. ‘Christianity will go,’ he said. ‘It will vanish and shrink. I needn't argue about that and I will be proved right. We're more popular than Jesus now; I don't know which will go first—rock 'n' roll or Christianity. Jesus was all right but his disciples were thick and ordinary. It's them twisting it that ruins it for me.’” Lennon’s remarks had a bit to do with his reading of Hugh J. Schonfield bestseller The Passover Plot.

Whatever nuance was there in the original statement was soon lost. Official condemnations appeared in denominational magazines, Beatle boycotts and Beatle record burnings rallied the faithful. At an August 1966 show in Memphis the Beatles mounted the stage as firecrackers went off and a barrage of fruit and debris pelted them. In 1978 Lennon “thanked” Jesus for putting an end to their hectic and now seemingly dangerous tours.

According to the Daily Telegraph the Vatican has absolved “John Lennon of his notorious remark, saying that ‘after so many years it sounds merely like the boasting of an English working-class lad struggling to cope with unexpected success.’” (For one of the best treatments of the “bigger than Jesus” episode, see Bob Spitz’s hefty tome, The Beatles: The Biography or Devin McKinney’s poetic, Magic Circles: The Beatles in Dream and History. Brian Ward’s popular lecture on the subject is tremendous.)

This turn of events marks a thaw not a full-scale warming. Other acts—Black Sabbath, the Stones, the Kinks, the Zombies—will have to wait for their blessing. (Of those groups, my money would be on the Zombies' uplifting dramatic pop. Rod Argent sang in the choir at St Albans Cathedral and Colin Blunstone’s heavenly voice could melt the heart of Richard Dawkins. The Zombies masterful Odessey & Oracle deserves to be spotlighted on Vatican Radio.)

It’s nice to hear that Rome has made peace with the world's greatest rock band, even if it is 40-some years late. My good friend Bryan Zimmerman wonders if this represents a general shift away from the social conservatism of yesterday. (Southern Baptist Convention, take note.) Here’s to hoping this official reappraisal is not like Father McKenzie’s “sermon that no one will hear.”

W.M. Clifton said…
The Vatican may look with favor upon the aversion to modernity that runs through much of The Kinks' work. What would Leo XIII have thought of Muswell Hillbillies in light of the Sixties?
December 4, 2008 at 12:49 PM