Turn Me On, Professor

All things come back in style, given time. Ratt reminded us long ago, in the lyrics of their radio scorcher "Round and Round": 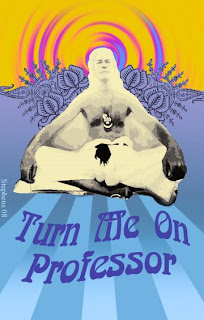 "What comes around goes around." Look around your campus or local mall and you'll see undergrads wearing stove pipe jeans, skinny ties, checkered shoes, and ill-fitting jackets as if they're on their way to see Dwight Twilley, the Jam, XTC, the Squeeze, or the Romantics. (I'm waiting for a bollo tie revival.) Even the economy has been struck with retro fever. It's the 1970s all over again. Sit down on a shag carpet and enjoy some fondu next to a roaring fire.

So, too, the pharmacological religious experiments of yesteryear are again being sponsored by a major research university. Minus Tim Leary, and minus the religious compound for the young and hopeless.

In Baltimore's Citypaper Michael M. Hughes reports on an interesting study William "Bill" Richards, psychiatrist and scholar of comparative religion, is conducting on the Bayview campus of Johns Hopkins University:

[I]n a room affectionately referred to by both the scientists and the volunteers as the "psilocybin room, [a participant is] taking part in the first study of its kind since the early '70s--a rigorous, scientific attempt to determine if drugs like psilocybin and LSD, demonized and driven underground for more than three decades, can facilitate life-changing, transformative mystical experiences.

The study, which took place from 2001 to 2005, and was published in 2006 in the journal Psychopharmacology with a follow-up in 2008 in the Journal of Psychopharmacology, made news around the globe and was greeted by nearly unanimous praise by both the scientific community and the mainstream press. Flying in the face of both government policy and conventional wisdom, its conclusion--that psychedelic drugs offer the potential for profound, transformative, and long-lasting positive changes in properly prepared individuals--may herald a revival in the study of altered states of consciousness.

The trippy religious narratives of participants would make for good fodder in a religious studies course. I can only imagine what sorts of conversations might occur around the seminar table after reading this:

"And then, immediately, I was in a parade [said a woman dosed for the study]. But this time it was Jesus. Coming down the street. And just wiped...totally wiped...dragging the cross. Beaten up badly. And the crowd had gathered." She pauses. "Now I don't have a religious background. I don't know the Bible stories. I don't know any of this stuff. And yet...I was right in the crowd, right at the moment when he turns and says, `Forgive them, Lord, for they know not what they do.'"

"It's so hard to put into words. It's like you truly understand oneness--that everything is one, everything is God. And you know that in your mind, and in your heart, but to feel it in your entire being, and to have no boundaries, to be part of everything that is beautiful and loving...there are no adequate words to explain it."