Is the Mortgage Crisis a Spiritual One? 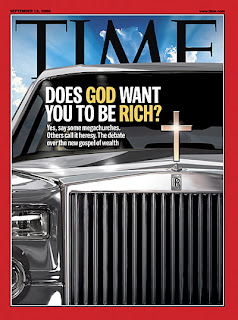 Time has an interesting article today on how the Prosperity Gospel has led some followers into the subprime mortgage mess. Jonathon Walter (University of California at Riverside) and Anthea Butler weigh in on how this theological focus on prosperity led many to believe that religious reasons were paramount in the approval of their risky mortgages. God, it seems, wanted them to have these homes despite their individual economic situations. The reaction from churches that promote the Prosperity Gospel will prove interesting as the financial tumult continues. Here's an excerpt:

Has the so-called Prosperity Gospel turned its followers into some of the most willing participants — and hence, victims — of the current financial crisis? That's what a scholar of the fast-growing brand of pentecostal Christianity believes. While researching a book on black televangelism, says Jonathan Walton, a religion professor at the University of California Riverside, he realized that Prosperity's central promise — that God would "make a way" for poor people to enjoy the better things in life — had developed an additional, toxic expression during sub-prime boom. Walton says that this encouraged congregants who got dicey mortgages to believe "God caused the bank to ignore my credit score and blessed me with my first house." The results, he says, "were disastrous, because they pretty much turned parishioners into prey for greedy brokers."

Others think he may be right. Says Anthea Butler, an expert in pentecostalism at the University of Rochester in New York state, "The pastor's not gonna say 'go down to Wachovia and get a loan' but I have heard, 'even if you have a poor credit rating God can still bless you — if you put some faith out there [that is, make a big donation to the church], you'll get that house, or that car or that apartment.'" Adds J. Lee Grady, editor of the magazine Charisma, "It definitely goes on, that a preacher might say, 'if you give this offering, God will give you a house. And if they did get the house, people did think that it was an answer to prayer, when in fact it was really bad banking policy." If so, the situation offers a look at how an native-born faith built partially on American econoic optimism entered into a toxic symbiosis with a pathological market. ...

But Walton suggests that a decade's worth of ever-easier credit acted like drug in Prosperity's bloodstream. "The economic boom 90's and financial over-extensions of the new millennium contributed to the success of the prosperity message," he wrote recently. And not positively. "Narratives of how 'God blessed me with my first house despite my credit' were common. Sermons declaring 'it's your season to overflow' supplanted messages of economic sobriety," and "little attention was paid to.. the dangers of using one's home equity as an ATM to subsidize cars, clothes and vacations."

With the bubble burst, Walton and Butler assume that prosperity congregants have taken a disproportionate hit, and are curious as to how their churches will respond. Butler thinks that some of the flashier ministries will shrink along with their congregants' fortunes. Says Walton, "You would think that the current economic conditions would undercut their theology." But he predicts they will persevere [sic], since God's earthly largess [sic] is just as attractive when one is behind the economic eight ball.

John G. Turner said…
I was interested to read Peter Berger's ringing defense of the Prosperity Gospel in places like Africa. In a nutshell: it works! Perhaps given your post, it doesn't work here?

Matt Sutton said…
I recently reviewed a new book on modern charismatics (Scott Billingsley's It's a New Day: Race and Gender in the Modern Charismatic Movement) for Books and Culture, which dealt in part with the prosperity gospel. You can read the review here: http://www.christianitytoday.com/books/features/bookwk/080929a.html
October 3, 2008 at 3:45 PM

Anonymous said…
Man... watch out for Jon Walton's book. I'm not sure when it will be out, but it breaks a ton of new ground on issues of media, race, celebrity, and the prosperity gospel.
October 3, 2008 at 4:08 PM

Anonymous said…
our blog should probably start cross-posting from Walton's blog, if he would be up for it.
October 3, 2008 at 4:09 PM

Phil said…
John, I found that article intriguing as well.

And Matt, great review. Can't wait to read the book.

Agreed, Ed. Walton also recently had a great piece at Religion Dispatches on the same topic.
October 3, 2008 at 4:53 PM

Paul Harvey said…
Ed: If you want to talk to Walton about crossposting or even guest posting here, please do so. I'm not at all familiar with this work or the blog, eager to learn more. Paul
October 3, 2008 at 5:22 PM

Aside from its money making prospects, the real problem with the prosperity gospel is that it is big on prosperity and small on gospel.
October 6, 2008 at 8:35 AM

Anonymous said…
Want to know how we can solve all the country's financial problems? Want to know how to save social security, restore the value of the dollar and help fund health care for all? The answer is to start taxing the churches. They should not be able to operate as tax-free enterprises any more. It's time they help shoulder some of the financial burden we now find ourselves in. Most all own land and buildings which requires police and fire protection.

Now, there is a church on every corner in Nashville and in our country. They all operate virtually tax free. This is crazy. I don't think they should be taxed as a full business but at least pay 25% of that a business would pay. The church is the first to say and I agree that this country was found on Godly principles. I think most of the financial mess we're in is a result of 911. Whether that is the case or not, we have run out of places to generate revenue. Printing more money is not the answer for that only devalue the dollar even more.

Does the church not appreciate what our troops have done since 911. The majority of the mess we're in is due to the war in Iraq. Most of the deficit before the economic collapse was due to the war. And if we had not had that high of a deficit when Wall Street went down; we'd had a smoother and quicker recovery. The war, whether you agree with it or not, was in response to 911. Some say a holy war; especially to those who pulled it off. Does the church not feel indebted to the military. Why wouldn't the church agree to such a measure. Does the church enjoy being able to call the fireman if there is a fire. Does the church not enjoy being able to call the policeman if there is a problem? Well these things cost money. Not to mention the enormous amount of land the church owns. This is unfair to all land owners across.

The church should agree to a ten years taxation period with a guaranteed non-tax period of two years subsequent to that.

It's time the churches put their money where their mouth is. Email your congressman to help get this idea moving. The revenue generated will more than pay our national debt and save social security.

Just so you know I am a christian and have no problem w/ my church paying taxes. Of course the church will hate the idea.

Here is the link to find your congressman.

Please forward this to all your friends. It should be an interesting debate.
November 29, 2008 at 1:23 AM

Anonymous said…
Ladies and gentlemen, in your religion you help each other? Best regards. Giacomo Montana