[Nota bene: I don't mean our Paul (Harvey), but, rather, the Saint. Not that Harvey isn't both a saint and a comrade.]

The latest NYRB includes a wonderful essay on the apostle Paul. 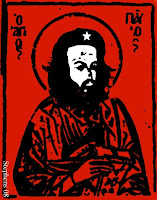 Columbia's Mark Lilla reviews books by Garry Wills, Jacob Taubes, Giorgio Agamben, Alain Badiou, Éric Marty, and Slavoj Zizek. Though he’s still widely criticized in some circles as misogynistic, a Hellenizer, a gnostic, a prude, and a tool of the state, others now find him to be a venerable revolutionary. Looks like he has some new, unlikely friends on the left. Lilla has written a very funny piece, which reminds me of Tom Wolfe's famous savaging of the antediluvian lit-crit crowd in Harper's. Lilla takes on muddle-headed Mandarins and Rococo post-Marxists with flair. There are some terrific passages:

Oddly, there is a lot of thought being given to Paul these days by inhabitants of the foggy academic archipelago encompassing critical theory, deconstruction, post-modernism, postcolonial studies, and the like. When the wretched of the faculty club gathered twenty-five years ago, conversation would naturally drift to Michel Foucault's views on corporal punishment; today you are more likely to hear a debate on the Epistle to the Romans as it bears on globalization and the war on terror. . . .

The worst [of the new books on Paul], for my money, is Giorgio Agamben's The Time That Remains. Agamben is the very model of the baffling postmodernist: obscure, pretentious, humorless. He is capable of writing that "the messianic pleroma of the law is an Aufhebung of the state of exception, an absolutizing of the katargesis " and of littering nearly every page with passages quoted in the original German, French, Greek, Latin, Hebrew, Spanish, Danish, Provençal, even (I'm not kidding) Hopi. Ezra Pound had nothing on Professor Agamben.

The essay on the web is for subscribers only. Yet it is available through many college, university, and public libraries.
Email Post
Labels: apostle Paul Biblical literature church history randall's posts

For those interested, Ward Blanton (a good friend from my seminary days) of the University of Glasgow has an interesting article called "Disturbing Politics: Neo-Paulinism and the Scrambling of Religious and Secular Identities" in the Dialog theological journal (you can find it online at various places, too, I think). Blanton welcomes Marxist readings a lot more than I do, but perhaps my opinion is limited by the fact that I understand only about half of what he's saying (and that's due to my limitations, not his). Anyway, it's interesting stuff.

Here's a related anecdote. I have relative by marriage who's a secular Jew and was quite involved in the radical campus movements in the 1960s. He once told me that his radical group used to read the New Testament in order to learn how best to treat fellow comrades in a movement of struggle. I remember him telling me how Paul's admonitions against gossip and selfish motives were particularly helpful.