What is religion? American religious history professors spend the first day of class going over that question. Profs round up the usual suspects for quotes: Plato, Thomas Aquinas, the two Ludwigs—Feuerbach and Wittgentsein—Freud, Clifford Geertz, Woody Allen . . . (Finding images of each for the requisite PowerPoint presentation is no trouble.) Religious studies 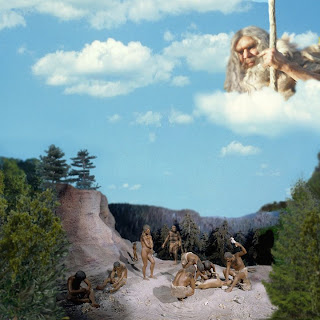 departments offer whole courses that ponder the “what is” question. Of course, you can define religion in many, many ways.

So, I was intrigued when I watched National Geographic’s provocative special, the Neanderthal Code, which shed new light on that old, old question/subject. “Who were the Neanderthals? How human were they?” the program asks. “For 150 years the fate of our closest relatives has been a mystery. But now scientists can start answering these questions—with the help of DNA.” The special looks at how Neanderthals may have interacted with Homo sapiens and considers the possibility of genetic overlap.

What drew my attention more than anything else, though, was a discussion of what may have been the religious beliefs of these now-long-gone human cousins. Reviewing the program in Archeology Zach Zorich comments:

Some of the most interesting parts of the documentary were the insights it provided into the lives of Neanderthals. The placement and preservation of certain Neanderthal remains indicates that they may have buried their dead. If that interpretation holds up it would show they believed in an afterlife. Likewise, chunks of the black pigment manganese dioxide have turned up at some Neanderthal sites showing signs of use. If the Neanderthals were using pigments to make paintings or to adorn themselves, it shows a previously unknown capacity for creating art.

Others have been skeptical about the archeological record, which represent some of the earliest burial sites in the world.

And so that brings me to the little diorama I created with Photoshop (the image posted to the right. Click to enlarge). My friend Bryan Zimmerman and I were talking about the possibility of Neanderthal religion and Neanderthal conceptions of God. Would they have had a Neanderthal-centric view of God or something altogether nebulous? (I went with the former for the diorama because I thought it was funnier.) Does a God or do Gods survive the death of the faithful? Bryan described that as the lower case “g” god. Who/what did the Hittites believe in again?
Email Post

Anonymous said…
Mark C. Taylor: "The most misunderstood concept in the study of religion is religion."

John G. Turner said…
Why is burying the dead taken as evidence of belief in an afterlife? Couldn't one bury one's relative to avoid watching a corpse decay or get eaten by scavengers?
September 29, 2008 at 11:16 AM

Randall said…
I think it's usually the ornaments, tokens, baubles that go with the dead that give some clues to religious belief. Why would primitive hominids bury their best sundries with a decomposing corpse?
September 29, 2008 at 1:51 PM

Anonymous said…
According to the intro textbook I use (Ludwig's Sacred Paths of the West), the idea that Neanderthals had some form of religion is relatively uncontroversial, based not on the *fact* that they buried their dead, but that (at certain sites) they always oriented bodies in a particular way, they included tools or other artifacts with the body, and/or they painted the body with red ochre or surrounded it with a circle of stones.

If there's doubt about this, I'll have to spend some time looking around at evidence to the contrary - it's not a period I'm familiar with - but my various internet searches to pull up nifty pictures of skeletons with ochre, etc. seem to confirm it.
September 29, 2008 at 1:58 PM

Anonymous said…
Also depends on how you define religion. Purposeful burial of the dead need not have any sense of an afterlife to still be considered a form of religious practice.
September 29, 2008 at 4:00 PM