As many readers will know by now, almost two years ago the hot potato issue of creationism came up in the Alaska governor race. Running as the Republican candidate Sarah Palin responded with something like the old teach-the-controversy chestnut: “Teach both. You know, don't be afraid of information. Healthy debate is so important, and it's so valuable in our schools. I am a proponent of teaching both.”

(Teach both, you know. . . Flat earth theory vs. round earth theory; aliens built the pyramids vs. humans constructed them; stars are holes in the canopy of the sky vs. stars are massive, 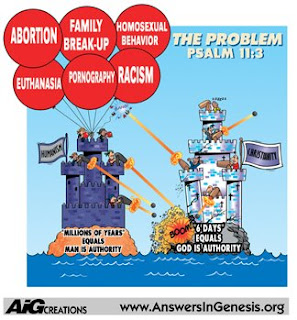 luminous balls of plasma; thunder is caused by God bowling vs. thunder is the sonic shockwave from lightning.)

According to the Anchorage Daily News at the time of the debate “Democrat Tony Knowles and Independent Andrew Halcro, said such alternatives to evolution should be kept out of science classrooms. Halcro called such lessons ‘religious-based’ and said the place for them might be a philosophy or sociology class.” The creationism of John McCain's newly announced running mate is stirring up some dust among liberals.

And will the issue ever go away? It’s like a vampire. But in this case not even a fact-based stake through the heart can kill it. In the research that Karl Giberson and I are doing for a new book, we’ve seen that Ken Ham, Aussie creation prophet based out of Kentucky, has captured the attention and imagination of millions of conservative Christians. Since his creation museum opened a little over a year ago attendance has well-exceeded original estimates. Bus and van-loads of home schooled youngsters are gobbling up Ham’s alternative “science” like so much manna from heaven.

The creation-evolution controversy is about more than science vs. pseudo-science. Considering what is at stake for conservative evangelicals and fundamentalists—civilization, human dignity, the sanctity of the Bible, the sacredness of marriage, etc., etc.—it’s hard for me to imagine the hubbub will ever die down.

[PS: See these recent takes on the subject: "With Palin on the Ticket, Evangelicals Are Energized," Washington Post; and a dose of skepticism: "Is She Really a Creationist?" Answers in Genisis.]
Email Post

John G. Turner said…
A minor point -- I believe Palin, in the spirit of Ronald Reagan -- largely ignored creationism and even her pro-life emphasis after winnning election.
August 31, 2008 at 8:55 PM

Randall said…
That's not surprising. I wonder if this is similar to how Huckabee backed off the issue when pressed on it.
August 31, 2008 at 9:11 PM