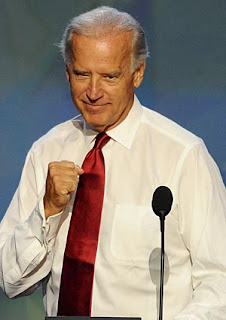 Much of the analysis of Joe Biden's speech at the Democratic Convention last night has focused on its attack on John McCain or its flubbed line about the vice-president answering the phone in the White House.

Perhaps I am reading too much into it, and perhaps some scholars of Catholicism can correct me, but it seemed that Biden's speech was informed by a small dose of Catholic social teaching, especially on the dignity of human work. He actually used the term "dignity" in relation to work four times.

My parents taught us to live our faith and to treasure our families. We learned the dignity of work, and we were told that anyone can make it if they just try hard enough. That was America’s promise.

Barack Obama...chose to go to Chicago. The South Side. There he met men and women who had lost their jobs. Their neighborhood was devastated when the local steel plant closed. Their dreams deferred. Their dignity shattered. Their self-esteem gone

And he (Obama) made their lives the work of his life. That’s what you do when you’ve been raised by a single mom, who worked, went to school and raised two kids on her own. That’s how you come to believe, to the very core of your being, that work is more than a paycheck. It’s dignity. It’s respect.

I could not help hear the influence of John Paul II's 1981 encyclical Laborem Exercens (On Human Work):

But the Church considers it her task always to call attention to the dignity and rights of those who work, to condemn situations in which that dignity and those rights are violated, and to help to guide the above-mentioned changes so as to ensure authentic progress by man and society.

If I am right here, Biden was arguing, in a very Catholic way, that the policy of the Bush-Cheney administration has created an economic environment in America that is equivalent to, in the Pope's words, a "situation in which that dignity and those rights are violated."

And then there was his reference to suffering. He talked about suffering in relation to the tragic death of his wife and daughter, but in this context it could have been indirectly applied to the suffering of the working man under Bush-Cheney's watch. He talked about how his mother taught him that "God sends no cross that you cannot bear.”

As some of you know, I grew up in working class north Jersey, the son of Italian and Slovakian Catholic parents. I have heard this kind of speech numerous times--a combination of the dignity of hard work, the American dream, faith and family, suffering and a tragic sense of life, and, for lack of a better term, a masculine sense of Catholic toughness and pride. (When bigger kids were picking on him, Biden's mother told him to “Bloody their nose so you can walk down the street the next day.”). This is the kind of Catholic ethnic identity that Matthew Jacobsen writes about in Roots Too: White Ethnic Revival in Post-Civil Rights America and, to some degree, John McGreevy writes about in Parish Boundaries.

Biden certainly has his disagreements with the American Catholic Bishops, especially on the issue of abortion (see Kelly's recent post), but this speech displayed the kind of hardscrabble, working class rootedness that the cosmopolitan, placeless, Protestant Obama really needs to win in November.

I have cross-posted this piece at The Way of Improvement Leads Home.
Email Post
Labels: catholicism crossposts fea's posts religion and class religion and politics

DEG said…
Not quite sure I'm on board with the idea that it's especially Catholic. I'm only one example, but I heard much of the same about the dignity of work during my evangelical upbringing, albeit minus the nods toward any overaching body that ensures that dignity is ensured. Still, great thoughts. Very provocative!
August 28, 2008 at 2:41 PM