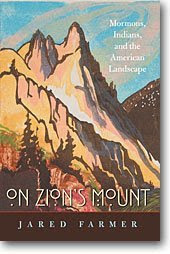 Mountains, Mormons, and mines -- all central to the history of the American West but infrequently examined within the same pages. Two recent works in Mormon History bring these themes together and help fill in what Jan Shipps once labeled the "doughnut" hole of Western History.

Jared Farmer's On Zion's Mount: Mormons, Indians, and the American Landscape (Harvard, 2008) tells the story of a mountain. I have to confess I failed to notice Mount Timpanogos on either of my two forays to Provo. Farmer explains why (besides the fact that there are never-ending vistas of impressive mountains in Utah that quickly overwhelm awestruck easterners) by documenting how Provo Mormons "created" Mount Timpanogos. Not the highest peak in the Wasatch, local boosters promoted it as such. They organized hiking trips and even wrote an Indian legend featuring a "lover's leap" from the top of Timp.

Farmer's book has many virtues, especially crisp and lively writing and the ability to closely examine myths. Did the Mormons make a desert bloom like the rose? No, the choicest parts of the Salt Lake Valley were already blooming. [I am going to investigate that one]. Were the Mormons benevolent toward Utah's Indians? No, they quickly crowded them out of their traditional fishing grounds. "Although Mormons had envisioned a different and extraordinary outcome for 'their' Indians," writes Farmer, "the outcome here was bleakly conventional." (55) Along the way, as is the case in most good books, one takes creative and entertaining detours. Farmer discusses topics like the health crazes of the late 1800s and the "invention" of hiking.

Paul Reeve's Making Space on the Western Frontier: Mormons, Miners, and Southern Paiutes (Illinois, 2006) examines the Mormon frontier that intersects current-day southwestern Utah and Nevada. Reeve, whose work profits from careful work in Mormon and government archives, transcends the "conquest" paradigm of recent Western History by emphasizing "interethnic and cross-cultural connections" over what for at least two of the groups was sacred space. If the Mormon pioneers partly conquered Utah's Indians, including the southern Paiutes, their Indian policy also included elements of unusual benevolence (here is a difference from Farmer). The pioneers themselves, moreover, were in danger of becoming the conquered when other Americans sought riches in Utah's mines. Ultimately, while there were winners and losers, all groups survived and sought to maximize their opportunities amidst changing circumstances.

Like Farmer, Reeve includes fascinating details, including the political process (rife with corruption) that stripped Utah of valuable mines by awarding additional territory to Nevada. Toward the end of Making Space, he includes several examples of Mormons, miners, and Indians transcending animosity and intermingling in more humane ways (when the Nevadans weren't joking about seducing plural wives). Reeve closes with a lament that too few saints followed 2 Nephi's insistence that "all are alike unto God," and he might well have lamented that Mormons and miners alike ignored Galatians 3:28.

Both Farmer and Reeve integrate Utah into the larger history of the West and the history of the nation. In Zion, like elsewhere, peoples clashed over hunting grounds, mining claims, and arable land. Reeve puts the clashes over mining rights within the context of Gilded Age greed and corruption, with both Mormons and Paiutes expressing a "relative lack of interest in the acquisitiveness permeating Gilded Age America." Both authors also ultimately tell stories of Americanization. Mount Timpanogos, although venerated by the Saints (who in 1993 christened Mount Timanogos Temple in American Fork, Utah), became "a modern, secular, American mountain" through its boosters' emphasis on athleticism and tourism. Reeve places the interactions between Mormons, miners, and Paiutes within a broad context of Americanization, as Mormons Americanized by abandoning polygamy and theocracy and Paiutes became even more obvious victims of forced Americanization by being forced to the margins of American society.

There are many points of intersection between the two books, as both Reeve and Farmer discuss Mormon Indian policy, Mormon economics, and Paiute history. Hopefully, they'll review each other's books, which might help me sort out my thinking on such matters.

I'll be on the lookout for Mount Timp next time I'm headed to Provo, and much as I take an interest in the lingering controversy over the Mountain Meadows Massacre, it's nice to have other historical topics to ponder regarding Southwest Utah.
[Note: Kelly Baker previously plugged both of these books (Reeve and Farmer) for us. I'm just finally catching up on these excellent recommendations!]
Email Post
Labels: Mormons native american religion Religion in the West religious geography turner's posts

Anonymous said…
Thanks for the review, John. And quite the timely post considering tomorrow is "Pioneer Day" in Utah, a state holiday celebrating the Mormon pioneers' entrance into the Salt Lake valley on July 24, 1847.
July 23, 2008 at 8:21 PM

Anonymous said…
Thanks, John. You're right that these are both cutting-edge examples of ways that Mormon history can illuminate American history.
July 24, 2008 at 1:51 PM

Stan Thayne said…
John: I'm offended. I literally winced when you confessed that you hadn't noticed our mountain during your visit to Provo. How could you miss Timpanogos?! You're going to have to climb it now to atone, next time you visit. (Okay, as a Utah Valley "native," I'm perhaps a bit overly attached--but seriously, if you've got time on your next visit, look me up and I'll take you to the top; it'll change your perspective on things.) Nice review, by the way.
July 29, 2008 at 7:17 PM