Recently, I’ve been reading quite a bit about ultramontanism. Just in case you’re wondering what in the heck I’m talking (I mean, writing) about, look no further than Félicité de Lamennais, French philosopher and political activist committed to the restoration of Roman Catholicism to its rightful place of authority in post-revolutionary France and the rest of Europe. Followers of Lamennais imagined the pope as the ideal patron of a Catholic renaissance during the nineteenth century. They considered the papacy to be the ultimate source of truth and the only acceptable arbiter of human reason that could stand down the arrogant threats of the Enlightenment, classicism, and rationalism. Literally, the word “utramontanism” refers to support for those “beyond the mountains” (ultra montes), in this case, the popes on the other side of the Alps.

But just when I’m about to resolve myself to the fact that I’m not going to be able know exactly how many ways there are to be Catholic in America today, I overhear a couple of guys in a coffee shop complaining about how most Catholics just don’t understand that there is only one way to be Catholic, and that’s true traditional orthodox Roman Catholicism. I’ve italicized “true traditional orthodox Roman Catholicism” (and now I’ve put it in quotation marks) because that’s what my unsuspecting conversation partners finally agreed was the best way to describe themselves. “It’s the pope, man. It’s all about the pope,” the gentleman in the blue t-shirt said to the other gentleman in the purple polo shirt. “I mean, what else is there. He’s the man,” Mr. Blue T-Shirt continued. To which Mr. Purple Polo Shirt replied, “Yeah, I mean, if it’s the truth, it’s the truth, right?” At this point, I think it would be best that I stop giving you the actual dialogue of the conversation and stick to the gist of their thoughts, which basically boils down to the 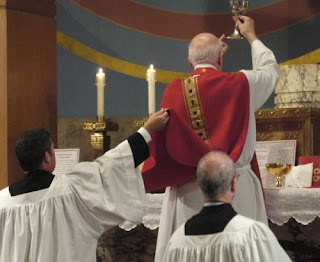 notion that if the Roman Catholic church is the only true church, and if the pope is the infallible leader of that church, then there is only one way to be Catholic, and that’s the Roman way. Or, to distinguish it from ethnic or cultural forms of hyphenated Catholicism, it’s the true traditional orthodox Roman Catholic way.

I should mention that all of this talk about the authority of the pope at a coffee shop started because two men were excited about their first experience of a Latin mass one weekday morning in June. As far as I could tell, Mr. Blue T-Shirt and Mr. Purple Polo Shirt had just attended a Tridentine mass for the first time. In case you were wondering, there has been quite a conversation, if not a debate, happening in Catholic parishes throughout the United States ever since Pope Benedict XVI issued the papal letter Summorum Pontificum last July on the use of the Roman liturgy of 1962—the liturgy that preceded the reforms of Vatican II, restricted the use of the vernacular in mass, and required that the officiating priest celebrate mass facing the tabernacle above the altar instead of the congregation. In another letter, Benedict insists that a return to the Tridentine mass should not be interpreted as a reversal of Vatican II’s 1963 Constitution on the Sacred Liturgy Sacrosanctum Concilium. He justifies a return to the pre-Vatican II liturgy on the grounds that there is an urgent need to repair “divisions” in the church by uniting all Catholics in mass.

Benedict doesn’t specify what he means by “divisions.” Instead of guessing what he means (though I think we all have our own hunches), I’m reminded by my little episode with Mr. Blue T-Shirt and Mr. Purple Polo Shirt just how fascinating the idea o 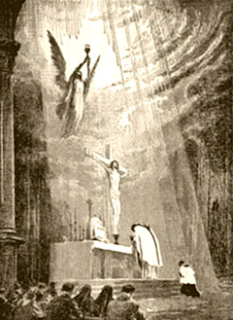 f the pope really is. The pope can be anyone to anybody—Peter’s successor, living saint, prophet, anti-Christ, opium dealer of the people. In this case, I listened to a couple of Cajun Catholics expressing their popular ideas about official church matters. Isn’t it always the case that popular and official forms of religion have a way of devouring each other the second they take the form of thinking, feeling, moving human beings in contact with the world around them? So keep your eyes peeled and your ears opened for a Tridentine mass(goer) near you. It’s on the minds of a lot of Catholics in the United States.

I’d like to make two more points before I sign off. First, Walker Percy once said that one of his favorite pastimes was to sit and listen to people talk at the local Waffle House, so don’t judge me. Second, toward the end of their conversation, Mr. Purple Polo Shirt turned to Mr. Blue T-Shirt and said, “Don’t get me wrong, I love Jesus, but I love his mama a little bit more.” One word: Awesome!
Email Post
Labels: catholicism mike's posts religion and the 1960s

Art Remillard said…
“I saw in a vision a black cross above the Babylon that is Rome, upon which was written Ira Domini, the wrath of the Lord. . . . I say to you, the Church of God must be renewed, and it will be soon” --Girolamo Savonarola

Each time I teach the history of Catholicism, I am amazed at how the question of papal authority has remained a point of debate, shifting from generation to generation. Clearly, social conditions play into this. I can empathize with Savonarola (whew, was he a treat) and the other reformers, since by all accounts Rome was a MESS. Who would want to associate themselves with all of that???

Anyway, I too have met the proverbial-multi-colored-polo-shirt-self-professed-orthodox-Catholics. I see in them a longing for stability, alongside a genuine attachment to the faith (which I CAN NOT understate or trivialize). Globalization etc. has left a mess of moral truths that makes Vatican II collegiality less appealing. The Latin Mass evokes a mythical memory of one truth, embodied by the pope. It's interesting to observe the conversations (conflicts?) between Catholics of the Vatican II era, and the rising generation. There are, indeed, competing notions of what counts as "truly" Catholic.

If trends continue as they have, we may very well see the pendulum swing in the other direction in the next 20 years. The only question I have is, what will spark a return to collegiality?

Anonymous said…
Since I became a "lapsed Catholic" many years ago, I've not paid much attention to what's happening inside THE church unless it has a political impact such as exhorting African Catholics against the use of birth control. But I must say, the idea that Pope Benedict has given the "ok" to the saying of the Tridentine Mass kinda bugs me. I rather like Pope John XXIII an it's my guess he wouldn't be too pleased that the windows of his Church were being closed up, catching all that old dust inside. Drag.
June 23, 2008 at 3:16 AM

I had a student recently get very excited about the pope's visit to the U.S. because this authority figure hopefully would straighten out all those liberal Catholics (his words not mine). In particular, this student was worried about the liberalism of Catholic universities because they did not mesh well with his vision of the church.

This student is also reading Augustine currently (we chat frequently), sometimes in Latin. I have a feeling that the Latin mass seems to represent at least for some a return to "traditional" Catholicism that is somehow untouched by Vatican II. Moreover, I am terribly surprised by how shocked my students are when I teach Vatican II in my courses. They know little about the council, and thus, they are not particularly concerned with the return of the Latin mass or what it signifies.
June 23, 2008 at 3:10 PM

Mike Pasquier said…
Did I mention that Lamennais was excommunicated later in his career? So much for papal authority.
June 23, 2008 at 10:02 PM